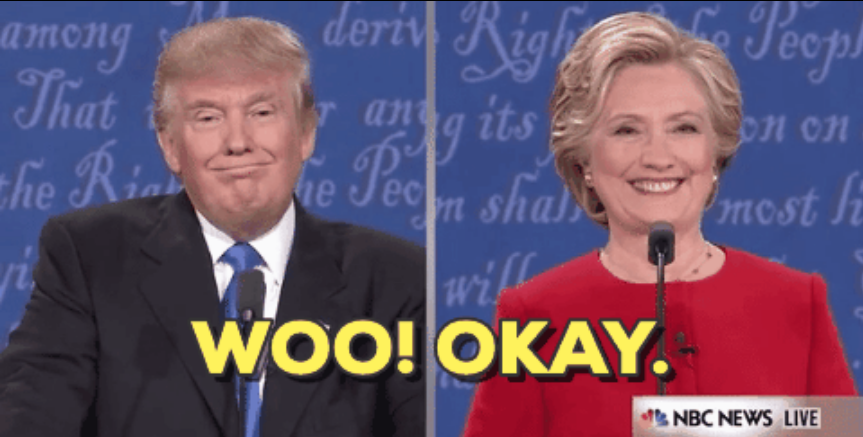 “Words matter,” Hillary Clinton said toward the end of Monday night’s U.S. presidential debate, the first of three. “Words matter when you run for president.” This much is certainly true. And words have come under a lot of duress in the last year or so, having to prove their worth like never before in a presidential race. That’s because Republican nominee Donald Trump has stretched and pushed them to their reasonable limits, over and over, often many times within a single hour. A recent check by Politico showed that Trump “averaged about one falsehood every three minutes and 15 seconds over nearly five hours of remarks.” Words uttered in a public sphere, words that are promises to voters, are not meant to be abused in such a manner.

The proliferation of the gif as a communication tool has been made possible most specifically by the ability to instantly capture live streaming video online, and thanks to smartphones that are capable of processing the images over speedy Internet connections. They appear frivolous—a looping, funny image that summarizes a reaction better than words could describe it—but when it comes to news events like a presidential debate, they allow for a different kind of consumption, one that is recyclable and personalized, and therefore perpetual in more than just its format.

What if we took gifs as seriously as words, as possibly lasting and as affecting as the clips we’ll hear on repeat over the coming weeks? Which gifs will last? Is it possible any of them might actually affect how people vote?

When it comes to politics, the goal now is to be gif-able in a positive way. You hope that the two- or three-second clip you get looping in everyone’s messenger service tomorrow morning is something that reinforces the message, rather than detracts from it. During the primaries, Trump unknowingly had the advantage. The gifs he spawned were beautifully brief summaries of his entire campaign, which at that point was mostly fighting the Republican party itself. If there was one memorable image, it was his dismissive facial expression unleashed as his opponents attacked— a warped, increasingly comic look that said all anyone wanted to hear from him: “Come on.”

Monday night was less kind to Trump on the gif front. It was not terrible, but not tremendous. His best moment was likely a serious side-eyed glance at Clinton as she spoke.

But otherwise, Trump’s gifs are merely amusing because they are, like him, bombastic. A flat-out declaration that it “sounds good, doesn’t work,” was about as good as it got.

This phrase is central to his claim that Hillary Clinton is all talk, but has failed to take action when she’s had the chance. But it’s not a compelling image. It’s not funny, and it’s not very memorable. Similarly, most of the other gifs Trump generated Monday were too tied to the words he was saying to be appropriated endlessly, as is required for gif longevity.

Clinton, on the other hand, will wake up tomorrow to find that she created the lasting image of the debate, and perhaps of the campaign. It was this one, which you can expect to see forever:

That frisson Clinton gives, shaking away a long Trump diatribe, is instantly identifiable. It echoes how many left-of-centre voters have felt about Trump’s endless stream of bigotry and lunacy since last June. In that way, it encapsulated the feeling that Clinton wanted to create about Trump Monday night better than anything she said aloud. It telegraphed the key message she’s been hitting for months: that Trump’s words should be met only with a disbelieving shake of the head, a chuckle, and a quick return to the reality at hand. She did what millions of people were doing throughout the preceding 90 minutes at home while watching their TVs.

It is on that last note that Clinton can claim victory. That single gif may have accomplished the one thing she has struggled to do so far through many, many months of campaign stops and interviews, and throughout which she has barely held a consistent national lead over Trump. Even if it is only for a brief, never-ending, looping moment, that gif instantly humanizes her.