In her first post-election interview, Clinton gave insight into Vladimir Putin, Bashar al-Assad—and her own 'devastating' loss to Trump 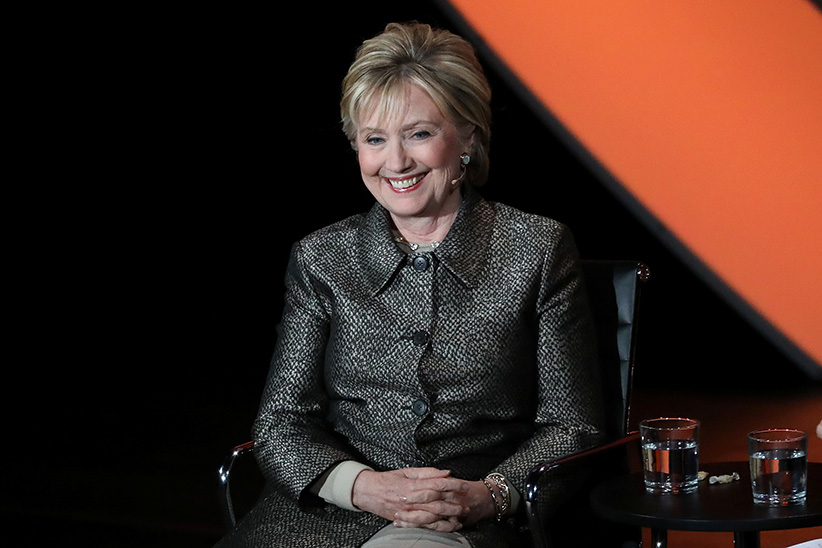 America’s favourite bête noire took centre stage of the Women in the World Summit in New York City Thursday to a thunderous standing ovation. No surprise there. Hillary Clinton was the big draw at the three-day, high-end women’s empowerment conference, more so than Scarlett Johansson or Justin Trudeau, who spoke earlier in the day. The former politician and failed presidential candidate was the event’s leitmotif—a reminder of the barriers women face, and what might have been. Clinton’s name was invoked throughout the day in reverential terms. Nicola Sturgeon, Scotland’s brilliant first minister, admitted to being a Clinton “fangirl” during an interview: “Hillary has been a trailblazer for women in politics, no matter what you think of her politics,” she said. “Her resilience is amazing. Women owe her a debt of gratitude.”

Clinton’s sit-down with New York Times columnist Nicholas Kristof was her first post-election interview after months of wandering in the woods—literally, not metaphorically. It also served as a launching pad for her next act, whatever that will be. She’s currently writing a book that will dissect the election, she said—”for the nearly 66 million who voted” for her. It will try to answer why 53 per cent of white women voted for Trump.

Clinton was spirited, even defiant, displaying comic timing that rivalled that of Samantha Bee, who introduced her. Listening to the former secretary of state discuss internecine world politics and the need for global connections stood in stark relief to the unprepared protectionist “America First” Gong Show ongoing at 1600 Pennsylvania Avenue. What mattered to the mostly female, mostly white crowd was more visceral—that the former pol remains a laughing, smiling beacon of resilience, the unsinkable Hillary Clinton.

Anyone expecting a probing investigation of whether Clinton misread an electorate clamouring for change would have been disappointed. Kristof is an ally. “I was going to offer you condolences, but maybe you should offer us condolences,” he began. Clinton said the loss was “devastating.” She expected to win. But the national fallout was worse, she told a packed theatre at the Lincoln Center: “I will put it this way. As a person, I’m okay. As an American, I’m pretty worried.”

Freed from the political arena, Clinton displayed engaging candour: “Certainly misogyny played a role,” she said of the election. “That has to be admitted.” She also discussed the election hack: “Russia was successful in influencing voters, which is different than interfering with machines,” she said. “It was the weaponization of information. That’s something [Russian President Vladimir] Putin has used inside and outside Russia to great effect.” She wants an independent, non-partisan investigation: “If we don’t take action together to make who was responsible accountable, they will be back.”

Putin and she fell out when she was secretary of state, she confided. Putin “plays the long game,” a sort of “three-dimensional chess,” she said, adding: “It’s always about how to advance himself, his oligarchic companions, and his country, in that order. He’s about destabilizing democracies.” She managed to diss Putin and Trump in one swipe. “He’s not exactly fond of strong women,” she said of the Russian president, “but he did shake hands with me.” She talked tough. “We have to change the dynamic. It’s time Russians were afraid of us.”

How much blame should be ascribed to Bernie Sanders and the media focus on her emails, Kristof asked? “How much time do you have?” Clinton answered. When Kristof asked if Obama was to blame, Clinton was quick to respond. “No, not him … there’s lots of things we could have done better.” Again she was cryptic, referring to the “combination of the Comey letter” and “WikiLeaks, which played a much bigger role than people understand yet.”

She expressed mystification with Trump’s first 100 days. “I don’t understand the commitment to hurt so many people that his White House seems committed to doing,” she said, adding the targeting of women as beyond any political agenda. “There’s something else going on.” She spoke of Trump’s unprecedented application of the global gag rule which removes all federal aid for NGOs who even mention abortion as part of health care. Doing so puts national security at peril, she argued. “I have seen, and you have seen, the impact those dollars have saving women’s lives,” she told Kristof. “This is not just the right and moral position; women’s issues are national security issues.”

Clinton savaged Trump’s failure to repeal and replace Obamacare. “I don’t think any of them read the law or understood how it works,” she said of the GOP, acknowledging some glee in the cock-up: “I will admit that was somewhat gratifying.” She likened a photo of the Trump administration sitting around a table, working to deny women reproductive health care, to “a skit on SNL.” Her favourite GIF, she shared, is one of dogs sitting around an oval office with the caption, “Discussing feline health care.” Clinton was on a roll: “Some of the things that come out of these men’s mouths: ‘Why do we cover maternity care?’ Oh, I don’t know,” she said caustically. “Maybe you were conceived by immaculate conception.” The audience went wild.

On a day when Syria was front of mind, Kristof asked Clinton if not acting more decisively on Syria was Obama’s worst mistake—and, by extension, her worst mistake as secretary of state. Clinton maintained her reputation as a Je ne regrette rien kind of gal. Hours before Trump authorized a missile attack on a Syrian air base, Clinton noted she’d long supported taking out Bashar al-Assad’s airfields to “prevent him from bombing innocent people.” She wishes the international community had reined Assad in, she said, noting that in 2012 she’d worked out a transition easing Assad out in Geneva. The dictator didn’t buy in. “Assad said, ‘I’m going nowhere,’ ” she recalled.

Clinton then digressed into a seemingly long history lesson about Syria that now can be read as code. Assad’s father destroyed a city that was a hotbed of opposition, she said, massacring more than 10,000. He was a reluctant and unprepared leader, thrust into the role after his older brother died. The Syrian dictator is “a prisoner of his family’s expectations,” she said. His dead father is a looming presence and he believes anyone who opposes him is a terrorist. That’s how Putin thinks too, Clinton added. She didn’t say it, but the profile also fits Trump. “This matters,” she told the audience, explaining that it’s crucial to know what goes on in the minds of one’s adversaries.

Looking ahead, Clinton said her focus is on making a difference—supporting young people, particularly young women, and helping Democrats take back Congress. “I am passionate about the unfinished business of the 21st century—advancing the rights of women and girls,” she said.

During the interview, Kristof shrewdly identified the nexus of Clinton’s historical import: “Young women were galvanized by your loss in ways they weren’t by your campaign,” he said. But he also noted a paradox that has emerged given Clinton’s experience: “They’re also worried about nastiness of public life,” he said. “Women are seen as likeable or competent but not both.”

Clinton was on it. She quoted another former first lady, Eleanor Roosevelt, who said anyone who enters the public arena has to grow skin as thick as a rhinoceros. “Boy, do I relate to that,” she said, before jokingly referring to herself as “Typhoid Mary” and a character in Waiting for Godot. She referred to oft-quoted studies that indicate that, for men, success and ambition correlate with likability. “With a woman, guess what?” Clinton said. “It’s the exact opposite.” Toughen your skin, she advised women. “Take criticism seriously, not personally. Part of bullying and name-calling is to crush your spirit, to make you doubt yourself. And I refused to do that.”

The crowd cheered its approval for more than a minute, clearly understanding that Clinton’s lessons from the campaign trail now apply to all Americans—most of all the female ones.