How a vaccine mandate for truckers could leave Canadians hungry

Politics Insider for Jan. 17: Examining whether we need COVID tests at the border; remembering NDP trailblazer Alexa McDonough; and investigating how governmental laziness has led to our health-care crisis 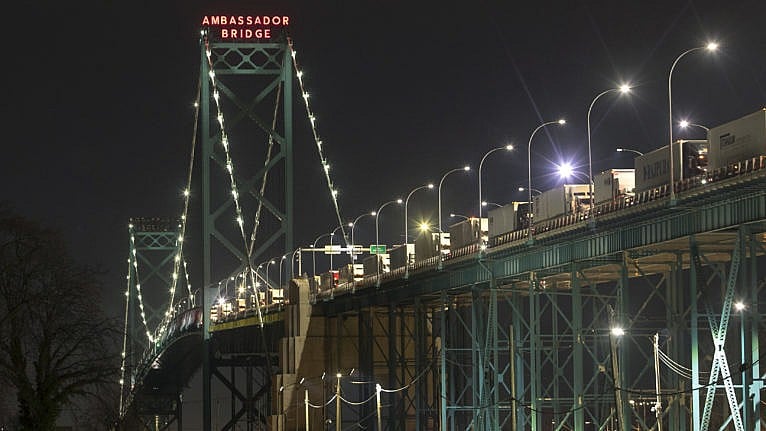 Trucks are lined up on the Ambassador Bridge between Windsor and Detroit, Michigan, Dec. 18, 2021. (Fred Thornhill/The Canadian Press)

Not enough truckers: Sylvain Charlebois writes in the Toronto Sun that the federal government’s mandatory vaccination policy for border-crossing truckers may threaten supply chains that keep Canadians fed this winter. Charlebois, a professor at Dalhousie University who specializes in food issues, thinks we could see higher prices.

Canada imports about $21 billion worth of agri-food products from the United States every year, and about 60 to 70% of the food imported arrives on wheels. That’s almost 20% of the food Canadians buy in foodservice and retail. And the timing isn’t great. Much of the volume comes during the winter months when produce from the southern states offers welcome supplies to Canadian consumers. Stopping some of that business could exacerbate the driver shortage the industry is already experiencing and could drive up retail prices even further in the weeks to come.

Jabs required: As of Saturday, Canadian truckers needed to be jabbed to avoid quarantine when they cross the border, and U.S. truckers were to be turned away, CP reports. The industry is warning of supply chain problems, some which could have been exacerbated by confusion about the policy from the government last week.

‘Right thing to do’: Jean-Yves Duclos told Global Sunday that truckers should get vaccinated, “not only to protect themselves, obviously, but also to protect their businesses and the industry.”

Duclos emphasized the health benefit of the policy: “The federal government has a responsibility to look after borders. We need to secure our borders in this emergency context, where there is a lot of Omicron traveling not only inside Canada, but outside of Canada.”

Border testing questioned: The Star’s Alex Ballingall has an interesting story about border testing, and whether its usefulness has come to an end.

“The whole world has Omicron,” [Dr. Theresa] Tam said, when asked Friday about Canada’s use of testing resources on travellers from abroad when the virus is already smashing domestic records for new infections inside the country. “We could do sampling for the tests, instead of testing maybe every single vaccinated individual coming from other countries, but we will evaluate that over time,” Tam said.

Help sought: Dominic LeBlanc told CBC Sunday that the Omicron wave is so big that Ottawa is inundated with provincial requests for help:  “These are tough weeks, we’re in very tough weeks now.”

Back to school: Students, parents and teachers are bracing for the unknown as kids in Ontario, Quebec, Manitoba and Nova Scotia return to school today, CP reports. Some don’t expect it to go well. Nova Scotia Teachers Union President Paul Wozney, for instance, thinks reopening is a mistake: “The pressure that Omicron presents hasn’t lessened, it’s gotten worse.”

McDonough broke through a gender barrier in 1980, becoming leader of the Nova Scotia New Democratic Party, a position she would hold for 14 years. She represented the Halifax Chebucto and Halifax Fairview ridings in the Nova Scotia legislature from 1981 to 1994 and was elected leader of the federal NDP in 1995. She was elected as member of Parliament for the Halifax seat in 1997 and held the seat for four terms and nine years.

Decency: Saltwire also has a good column from John DeMont, pointing to her “fundamental humanity, her decency,” and a conversation with her biographer, Stephen Kimber, who recalled how Alexa dealt with the fact that when she was first elected, there was no women’s washroom in the Nova Scotia legislature.

Now, one of the things about Alexa that is very interesting is that she turned these negative things around. She knew that it didn’t make sense to complain about the lack of washroom facilities: it would have sounded like whining from a privileged south-ender, right? But what she did say is, hey, I got to stand in line with all these other women who were there to go and watch the legislature and I learned all sorts of things about issues that were concerning them while we stood in the line for the washroom.

Unprepared: In Maclean’s, Justin Ling has a long and thoughtful feature on how our “slothful and lazy governments” have failed to build surge capacity in our health-care system, which means that we are buffeted by each wave of COVID.

Before the virus hit, Ontario had 2,012 adult ICU beds. As of Oct. 31, 2021, according to the province’s independent scientific advisory board, there were 2,343. Two years of the worst health disaster in modern Canadian history and its largest province managed to add 331 beds to its intensive care units. That story has been repeated straight across the country—albeit without Ford’s trademark ability to make up numbers. Nearly every province has seen its health system pushed to the breaking point in recent weeks due to the Omicron variant. All the promises that we’ve heard for two years about using the ebb between waves to prepare have turned to sand.

A bad vote? Interim Green Leader Amita Kuttner tells Althia Raj, in the Star, that the party’s last leadership election was flawed.: “I don’t actually think that the last vote was legitimate. Enough people didn’t get their ballots.” Kuttner sketches out the party’s plan for the next leadership race and discusses their transition.

Ukraine warning: Ottawa is urging Canadians to avoid non-essential travel to Ukraine, warning of “Russian aggression” with more than 100,000 troops near the border, Reuters reports. Melanie Joly is to visit Kyiv this week.

Tear it down: It’s time to get rid of 24 Sussex, writes Susan Delacourt in the Star.

No challenge: Former Quebec premier Jean Charest told CTV Sunday that Ottawa is unlikely to challenge Quebec’s controversial proposal to apply a tax on the unvaccinated: “I’ve been there. In the days when I was premier of Quebec, there were things we were doing, that in certain instances, may have been outside the Act. The federal government won’t move on [this], they’ll let it pass.”

Against: A National Post editorial comes out strongly agains the idea of taxing the unjabbed: “Following this logic, we would levy special health taxes on smokers, on heavy drinkers, on those who eat too much fast food, too much sugar, and those who don’t exercise enough.”

Uncivil: Post columnist Tasha Kheiriddin, who wrote a good column last week calling for pressure on the unvaxxed, was subsequently inundated by uncivil replies, she writes.

You’d think I had lobbed a grenade. Over the ensuing 48 hours, my inbox overflowed with responses, most of them negative. They could be grouped into four main categories: The “I am so disappointed in you” emails; the “you are wrong about the science” emails; the “seat-belt and drinking-and-driving laws are not vaccines” emails; and the rude emails, which included this gem of a death threat: “I will toast the day your families’ brains are smeared all over your living room walls. You asked for it. F***ing die bitch.”