The affordability crunch is to civic politicians what a recession is to federal ones: They ignore it at their peril. 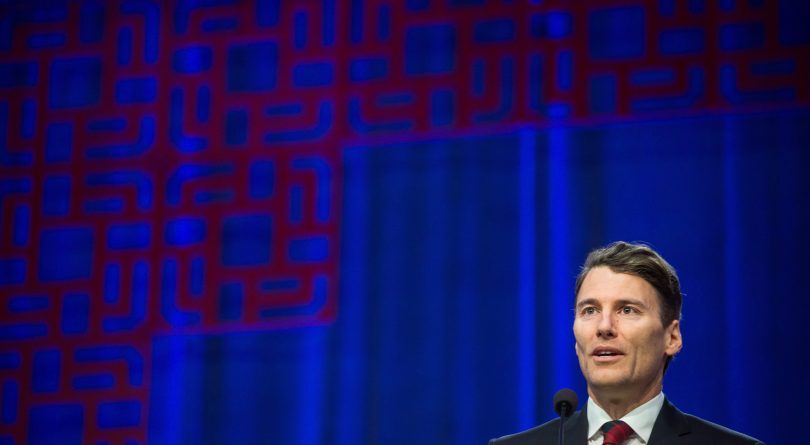 Robertson, seen here delivering an apology on behalf of Vancouver to residents of Chinese descent, is departing the civic stage, leaving behind a floundering party (THE CANADIAN PRESS/Darryl Dyck)

Vancouver mayor Gregor Robertson burst onto the civic political scene in 2008 when he led a young party called Vision Vancouver to victory, launching a decade-long reign. With his movie-star looks, trademark bicycle and passion for the environment, Robertson and Vision Vancouver breathed new life into a city that had fallen out of step with the urban zeitgeist.

Vision Vancouver embraced backyard chickens, food trucks and bike lanes. It tackled serious problems as well, promising to end homelessness—a lofty goal it failed to achieve. It licensed pot dispensaries well before the promise of cannabis legalization, a move that would not have flown elsewhere in Canada yet was popular on the so-called “left coast.” For a time, it seemed the party, with its masses of young supporters, could do no wrong.

Now, with a civic election set for Oct. 20, the party is in tatters. Robertson, whose personal popularity has plummeted, opted not to run again, and all but one incumbent councillor followed his lead. Worse, Vision’s mayoral hopeful Ian Campbell dropped out of the race days before the nomination deadline. He had failed to disclose all his distant brushes with the law, including a charge of spousal assault that, though it was stayed, the party felt made him an unsuitable candidate in the era of #MeToo.

How did Vision plunge into near oblivion in the four years since the previous municipal election? The answer lies at least in part with double-digit property price increases and a housing affordability crisis the likes of which Vancouver has never seen. Although the city has limited influence over market forces driving the increases, municipal governments are on the front line for political repercussions for this deﬁnitively local problem—especially if they’re slow to take action. “At some point, it got away from them,” says former Vancouver NDP MP Libby Davies.

Young people wrote breakup letters to local media as they relocated to cities where the cost of living is lower. The hashtag #DontHavea-Million exploded, reflecting the frustration of those shut out of the housing market. By the time Vision stepped in by imposing an empty homes tax and curtailing short-term rentals, the political damage was done. In July, the Royal Bank of Canada declared that housing was at a “crisis level,” and with an election in the ofﬁng, Vision became the lightning rod for affordability discontent.

As a party (versus an unofﬁcial voting bloc on a non-partisan council like Toronto’s), Vision has proved particularly vulnerable to this kind of disaffection. Toronto, for one, has been grappling with the same overheated housing market in the run-up to the municipal election in October. The Toronto Region Board of Trade has warned that half of Greater Toronto and Hamilton Area households spend 50 per cent or more of their disposable income on shelter costs, echoing a 2017 warning by the Greater Vancouver Board of Trade, which predicted the city will soon be unable to attract and retain talent to sustain its workforce.

John Stapleton, innovation fellow with the Toronto-based Metcalf Foundation, likens the disparity to the popular British TV series Downton Abbey—except at Downton, servants had a home in the grand manor. In Toronto, the “service class” can’t live and work in their own community. But without parties to blame, wrath over affordability in Toronto lands largely at the feet of higher levels of government.

Some of the anger directed at Vision is unfair, says Tom Davidoff, a professor at the University of British Columbia’s Sauder School of Business. “Who could have managed the tidal wave of price escalation which the city has limited tools to address?” Andy Yan, director of Simon Fraser University’s City Program, agrees the root causes of the affordability problem are global and complex. But in Vancouver, he says, voters not only lost conﬁdence in the city’s policies, they lost faith in the governing party.

Vision insiders insist internal polling numbers show the party is better off than critics suggest. But many on the outside are predicting a complete wipeout. Suzanne Anton, who ran for the Non-Partisan Association against Robertson in 2011—and lost—says Vision blew the housing ﬁle on all fronts. The party’s promise to end homelessness was an “abject failure” in part because Robertson, with his NDP roots, could not get along with the provincial Liberal government in Victoria, she says. Anton also believes the city under Vision didn’t get enough community amenities, including social housing, in negotiations with developers. On top of that, rents charged for “affordable” units produced in new developments weren’t particularly affordable—$3,702 for a three-bedroom unit on the West Side—and when the numbers came out, the public reacted badly.

Davies is less critical, saying the help Vision needed from other levels of government was not forthcoming: “Gregor lived through a period when Stephen Harper was in power and there was no commitment to social housing.” The next council will have more receptive partners in the provincial NDP and federal Liberals, she predicts.

The Trudeau government has committed $40 billion to a national housing strategy aimed at halving homelessness and building 100,000 affordable housing units countrywide. But the cash has not yet started to flow, and when it does, it will be too late for Vision. Whoever wins the next election, says Davies, will have to make gains on the affordable housing ﬁle to survive. “Young people can’t afford to live here, and employers can’t ﬁnd people to work,” she says. “It’s never been as bad as it is now.”