How to harness the volatility of the populist Right

Jen Gerson: Growing anger, fear, frustration and disappointment are very real in liberal democracies. What's a Conservative to do? 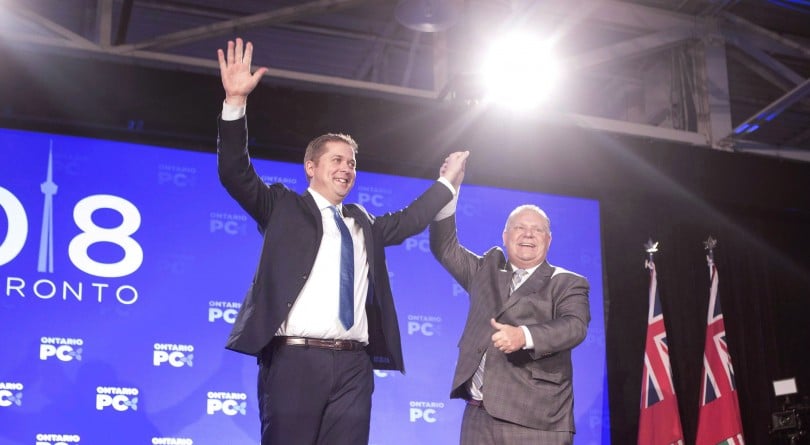 There is a metaphor that Preston Manning—who has settled into his role as a kind of elder statesman within the conservative movement—is fond of using to describe the fundamental volatility of populist politics. It starts with a description of a rogue well—an oil or gas well in which pressure from below builds until it explodes. The only way to prevent catastrophe is to drill a relief well, a secondary line that channels and vents that pent-up energy. Drill the relief line too deep or too shallow and the rogue well explodes anyway: hit the right angle and the canny drill operator can harness the energy to his own end.

This, Manning believes, is the nature of populism. Ignore it and it will consume you; tap it clumsily and it will both explode and leave you implicated in its self-destruction. But drill that relief well just right and energy abounds.

Stephen Harper makes a similar argument at book length in Right Here, Right Now: Politics and Leadership in the Age of Disruption. It’s as close as I can come to a unifying theory of what Canadian conservative parties are trying to do as Western democracies are overcome by movements that fundamentally threaten the assumptions and values that underpin the legitimacy of our governments and societies.

After a 70-year run of comparative peace and prosperity, liberal democracies are succumbing to the appeal of xenophobia, demagoguery and cronyism. The institutions that once guided us and gave us a sense of social cohesion—church, state, media and civil society—are falling into disrepute.

The pax that held sway over much of the developed world since the Second World War—which gave us extraordinary improvements in our quality of life on virtually all measures—also endowed us with the illusion that this forward momentum toward progress was inevitable. We are now confronted with the possibility that we have enjoyed nothing more than a historical anomaly, a statistical outlier, a blip of peace and prosperity that is ending, devolving to a norm of revolution, tribalism, mass migration and environmental catastrophe.

The anger, fear, frustration and disappointment are very real. What, then, is a Canadian conservative to do? Another Liberal-lite platform? A series of small-business tax cuts and boutique tax credits?

The conservatism of the past decade is ill-equipped to face the modern challenge. So, instead, we see more establishment conservatives tapping the well, attempting to channel the wild sentiment into more constructive mainstream politics. Those in Ontario embraced the populism of Doug Ford, for example. In Alberta, Jason Kenney has promised a referendum to force the federal government to renegotiate equalization. We see the tap in the cross-country opposition to a carbon tax. And, increasingly, we see it in the federal Conservatives’ attempts to build a new consensus on anti-immigrant and anti-asylum-seeker sentiment—a xenophobia inherited from populist and right-wing movements in countries that are struggling to cope with millions of asylum seekers spreading across the planet.

Conservative leader Andrew Scheer tapped this very vein when railing against the UN’s Global Compact on Migration, implying the agreement would erode Canadian sovereignty—rhetoric that mirrors far-right sentiment in Europe, where the pact is imagined to be a scheme intended to remove all national borders.

ANDREW MACDOUGALL: The question Conservatives need to answer before they say anything

As someone who sits in the squishy Red Tory middle, I’m disappointed by these recent rhetorical moves on the part of the Conservatives. Canada is a wealthy and sparsely populated country; we have a moral obligation to respond with even greater compassion and care to the global migration crisis now threatening to upend the Western world. It’s perfectly sound to offer focused critique of our current immigration system, but that is not what I see here. There is a bright line between legitimate criticism of how the current Liberal government has handled asylum seekers—by noting that the Prime Minister’s preening tweets on the subject are incongruent with his government’s failure to provide adequate resources for the subsequent influx of migrants, for example—and xenophobic rhetoric rooted in conspiracies about the UN.

Conspiracy theories are an intellectual disease; once acquired, they weaken the immune system of critical faculties and good judgment. Once individuals accept the premise of the conspiracy theory—that the UN is part of a global plot to undermine national sovereignty, for example—further conspiracies are easier to catch; Agenda 21, globalists, QAnon, (((the Jews))). And then where must the party go to meet them?

Indeed, yellow-vest protesters who turned violent in Edmonton in mid-December bore signs railing against the UN migration compact. They also heralded the QAnon conspiracy, a sprawling theory holding, essentially, that all the chaos besetting the Trump administration is intentional and has a purpose, and that Donald Trump is the mastermind; at least one protester appeared wearing a leather jacket espousing support for a far-right racist splinter group of the Soldiers of Odin.

That is the risk of the relief well. It touches a powerful and potent energy that can dramatically change a political landscape. Or it can blow up, creating a plume of smoke that can be seen for miles. It could sully the conservative movement in this country for a generation. There exists a narrow target between addressing fears and inflaming them. Don’t miss.