How Trudeau's cabinet stacks up against Trump's team

(L)President-elect Donald Trump waves as he arrives at Trump International Golf Club for a day of meetings, November 20, 2016 in Bedminster Township, New Jersey. Trump and his transition team are in the process of filling cabinet and other high level positions for the new administration. (Drew Angerer/Getty Images) (R) Prime Minister Justin Trudeau waves to supporters at the 2016 Liberal Biennial Convention Winnipeg Saturday, May 28, 2016. (Photograph by John Woods)

“Because it’s 2015” is so 2015. (And so Canadian, it seems.) With the inauguration of President Donald Trump mere days away, a noticeable trend has emerged in his picks for the most important cabinet positions in the new administration: they’re overwhelmingly white, old, and male, not to mention really, really rich.

Of the 19 cabinet level nominations Trump has announced so far, only five are either women or visible minorities. In other words, three-quarters are white men. That stands in stark contrast to the cabinet Trudeau has assembled (both pre- and post-shuffle). But age, gender and ethnicity is only one way members of the two cabinets differ. To highlight that, Maclean’s took a deeper look into the policy positions and backgrounds of top members of each country’s cabinet. We included an icebreaker for if and when the cabinet members meet their counterpart in the other country.

Here’s another powerful (if admittedly visually disturbing) way to look at the vast difference between Team Trump and Team Trudeau, combining the four faces of what are arguably the highest-profile cabinet roles in each country. 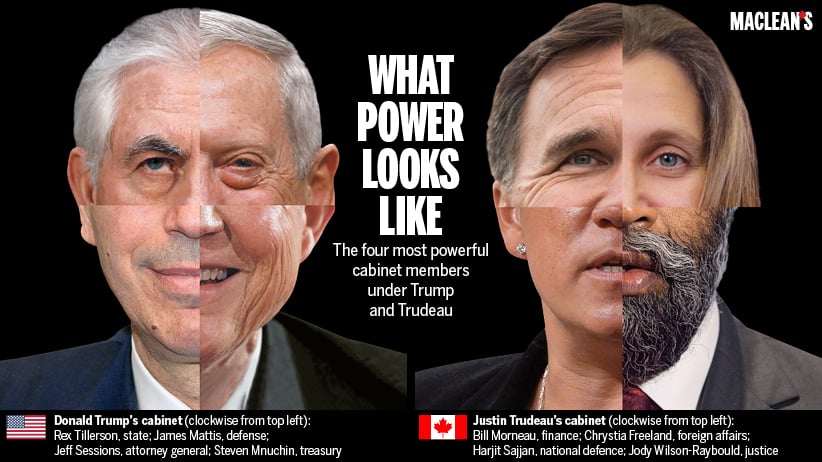