How USMCA could scuttle free trade with China 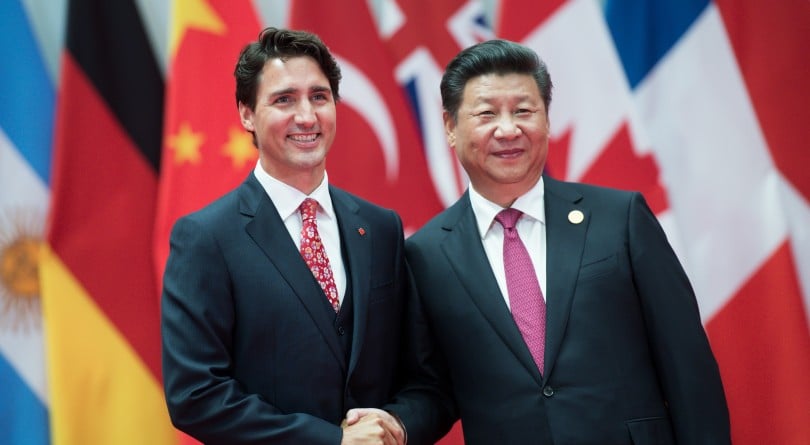 If the USMCA trade deal clears the many hurdles ahead of it, the agreement will grant the U.S. an effective veto over which countries Canada can pursue trade deals with in the future, namely China. Section 31.10 of the deal requires the U.S., Canada and Mexico to give three months’ notice before starting free trade talks with a “non-market country.” Experts say it’s a remarkable concession that could have far more impact on Canada than a few percentage points of foreign access to the country’s dairy market.  “It’s very, very unusual. I’ve never seen a clause like this in any trade agreement,” former trade negotiator Peter Clark told iPolitics. (iPolitics)

Yet Foreign Affairs Minister Chrystia Freeland insists the non-market clause is no biggie. She says that’s because any signatory to the deal can walk away with six months notice. Which is just one way the new NAFTA could still go bad, writes Shannon Proudfoot. Approval in each country could take many months, and given the state of U.S. politics, it’s not guaranteed. (Maclean’s)

Donald Trump has long sold himself as a self-made billionaire. But a blockbuster investigation by the New York Times has found Trump received US$413 million in today’s dollars from his father, much of it through tax dodges in the 1990s and in some cases outright fraud:

The manipulation of values to evade taxes was central to one of the most important financial events in Donald Trump’s life. In an episode never before revealed, Mr. Trump and his siblings gained ownership of most of their father’s empire on Nov. 22, 1997, a year and a half before Fred Trump’s death. Critical to the complex transaction was the value put on the real estate. The lower its value, the lower the gift taxes. The Trumps dodged hundreds of millions in gift taxes by submitting tax returns that grossly undervalued the properties, claiming they were worth just $41.4 million.

The same set of buildings would be sold off over the next decade for more than 16 times that amount.

The most overt fraud was All County Building Supply & Maintenance, a company formed by the Trump family in 1992. All County’s ostensible purpose was to be the purchasing agent for Fred Trump’s buildings, buying everything from boilers to cleaning supplies. It did no such thing, records and interviews show. Instead All County siphoned millions of dollars from Fred Trump’s empire by simply marking up purchases already made by his employees. Those millions, effectively untaxed gifts, then flowed to All County’s owners—Donald Trump, his siblings and a cousin. Fred Trump then used the padded All County receipts to justify bigger rent increases for thousands of tenants.

One law professor, when told about the All Country transaction, said the Trumps’ use of the company was “highly suspicious” and could constitute criminal tax fraud. A lawyer for Trump told the Times that “allegations of fraud and tax evasion are 100 percent false, and highly defamatory.” (New York Times)

The on-again off-again undertaking of building a massive liquified natural gas terminal on B.C.’s coast is back in the ‘on’ position, for now. A consortium of energy companies headed by Royal Dutch Shell gave the go ahead to construct a $40 billion LNG terminal in Kitimat, B.C., along with a pipeline to the northeast of the province. Justin Trudeau, eager for a win for a change when it comes to big energy projects,  jetted out to Vancouver Tuesday for the announcement. Ottawa will kick in $275 million in infrastructure improvements and marine protection to address the increase in shipping traffic. (Vancouver Sun)

As it is, Ottawa is doing a terrible job of protecting marine mammals. That’s the finding of federal environment commissioner Julie Gelfand in a new report to the House of Commons. (iPolitics)

It’s a bird, it’s a plane, it’s  . . . ‘Super Canada’? With just six months left before Britain leaves the European Union, Tory MPs gathering for the U.K. Conservative Party’s annual meeting are floating the idea of a Canada-style trade deal with Europe as a model for their country’s future relations with the EU. (Globe and Mail, CTV news)

All trade deals have winners and losers. Canadian consumers might get cheaper milk and the chance to buy more American stuff duty free, but they’re about to lose out on watching American Super Bowl ads. In 2016 the CRTC ended the practice of simultaneous substitution, whereby Canadian broadcasters replaced U.S. ads on shows like the Oscars and Super Bowl. But the new USMCA deal specifically calls on Canada to rescind that CRTC ruling. (CBC News)