Failsafe clichés have worked for Brian Pallister. Why not for Wab Kinew? 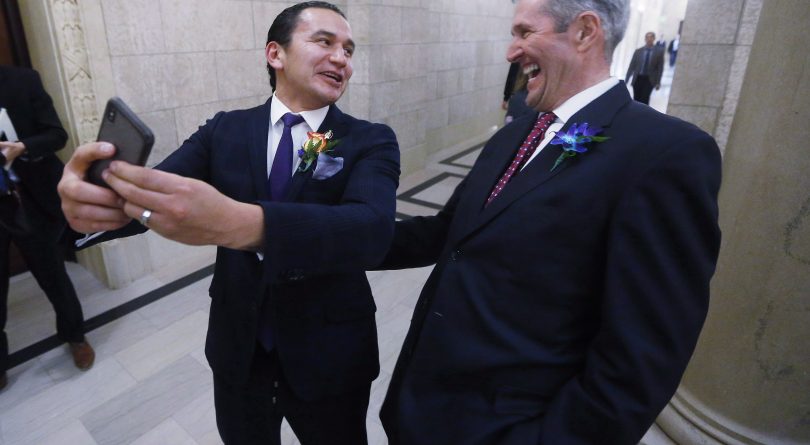 For several weeks—months, even—Manitoba Progressive Conservative Leader Brian Pallister couldn’t stop talking about a certain object, one the incumbent premier could variously describe in mundane household terms or imbue with mythical symbolism. He would invoke it in business speeches. He brought it up incessantly at the lone election debate he attended.

In the provincial campaign’s final week, Pallister actually appeared alongside this icon. The legend made flesh. Or, in this case, wood. A kitchen table.

It’s a symbol Pallister elucidated in his speech to release the PC party platform. “A symbol of where Manitobans meet, where Manitoba families create memories, share joy and sorrow… where Manitobans like my parents, like my grandparents, struggled, as they piled up their bills.” He hunched his lanky, 6-8 frame to touch it reverently. Later, he knocked on it like it was a voter’s door. Within 14 minutes, he had referenced his rectangular prop 11 times, mostly in the context of his party leaving money on that table. Mercifully, he didn’t literalize that part of the metaphor with wads of cash.

The last time this writer witnessed political theatre this corny, a long-shot 2010 candidate for Calgary mayor literally threw his hat into a ring (cowboy hat; hula hoop). But the hammy act in this case has helped position Pallister’s Manitoba PCs for a win in Tuesday’s election—and a comfortable one. Because it won’t take much: partly by design, and partly by circumstance.

Despite low popularity for the often awkward and stilted political veteran, Pallister won in 2016 the province’s biggest majority in more than a century for his first term—40 seats out of 57. In doing so, he swept out an NDP government that had ruled since 1999 and broken its promise not to raise the sales tax. Not content with that advantage, Pallister also called this election a full year ahead of the fixed voting date, to ensure sour memories of the NDP were fresher. He also timed the campaign so three-quarters of it occurred in August, when hardly anyone is thinking about politics and whether to oust a governing party that weeks ago lowered the sales tax by a point, returning it to seven per cent. 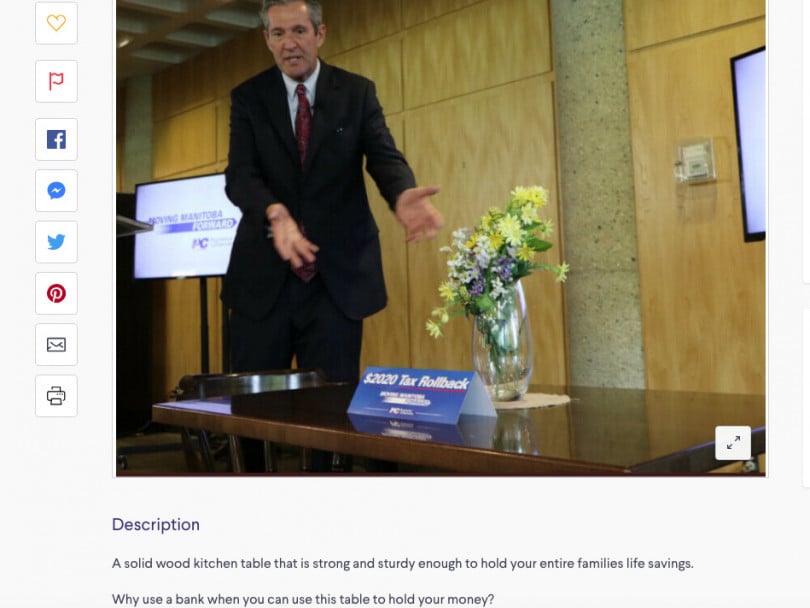 It has limited the time the NDP have to carve into the polling lead the Tories have long nursed, and the opposition knows it. “Maybe it will only take one week of a campaign with people back from vacation for people to move in our direction,” NDP Leader Wab Kinew told Maclean’s in an interview.

Pallister’s chief rival is in many respects his polar opposite. Kinew 37,  is nearly three decades the premier’s junior. He’s been in politics for less than three years, while Pallister has bounced between provincial and federal office since 1992. As a former broadcaster and author, Kinew has all the suavity and charisma the often socially awkward, seemingly introverted premier notably lacks. He’s also made history as Canada’s first major party leader of First Nations background.

RELATED: For Wab Kinew, the personal is political

Kinew strode into a rally crowd in northwest Winnipeg on Saturday with his shirtsleeves rolled up, revealing a tattoo spanning one forearm that says “live by the drum,” and the other saying “die by the drum.” But then his first line, his shopworn introduction, rivalled Pallister’s table-philia for its hokeyness: “Hey, how do you do, I’m Wab Kinew.”

Kinew seeks to turn almost every discussion into one about health care—a politician with a message track he’s supposed to stick to. While it’s a potent political issue, after the Tories’ ambitious but rocky overhaul of the health system and closure of Winnipeg emergency rooms, Kinew’s is a strikingly conventional tack for someone with such an unconventional background. When Maclean’s asked him before his first win as MLA in 2016 if he aspired to provincial leadership, he said he more fancied taking the fight to Ottawa, where he could press for the constitutional changes necessary for true reconciliation.

But to expect Kinew to bring revolution to his province’s politics would be to misread what Manitobans typically want—gentler, more incremental politics of the sort that three-term NDPer Gary Doer brought two decades ago. This is the centrism Kinew is trying to emulate with his simplistic mantra about “fixing health care” and his constant refrain about making life affordable. (The same centrist impulse has led Pallister to subtly distance himself from more fervent Conservatives like Jason Kenney and Doug Ford.)

What’s more, in a break with New Democrats in other parts of the country, Kinew’s NDP has promised to set Manitoba’s carbon tax at a mere $20 per tonne and not raise it—despite the Trudeau government’s plan to gradually hike the carbon tax to $50 (Trudeau had previously rejected Pallister’s plan for a $25 charge that would not rise.) The NDP leader tells Maclean’s many Manitobans would reject ramping up the levy as unaffordable. But the policy positions him to the right of Dougald Lamont and the Manitoba Liberals, who are in a pitched battle with Kinew’s party for some key Winnipeg seats.

Kinew is a rare figure whose national profile receded after he became a political leader. He abandoned most of the dynamic flourishes that marked his earlier career to focus on the quotidian stuff any provincial opposition leader does: health care, education and the like.

RELATED: How the last holdouts survive on a flooded-out Manitoba First Nation

Of course, there might be another reason Kinew has set out to come across as stalwart and mundane: his checkered background. He used to rap and tweet offensive lines; in his early 20s, he was convicted of impaired driving and assaulted a cab driver; he was once charged with assaulting a partner—throwing her across the room, she alleges—though the charge was stayed. The Tories have salted the airwaves and online spaces with reminders of Kinew’s past misdeeds, branding him “a risk we can’t afford,” though Pallister and PC candidates shy away from echoing their war room’s parries.

Kinew addressed his past struggle with addiction and anger in his 2015 memoir, and has maintained he’s a changed man. His wife, doctor Lisa Monkman, appears in a party ad attesting to his character and sturdiness as a father. “I think I’ve shown Manitobans that I can keep my cool, be responsible,” Kinew said in a mid-campaign CBC interview. While he maintains that’s a subtle dig at Pallister and his conflagrations with Trudeau; a Manitoba Hydro board that resigned in protest; and the Manitoba Métis Federation (and perhaps most notoriously, that he dodges Manitoba winters for long stays in Costa Rica), rare are politicians who in any way concede they must persuade the public that cool is their default mode. Probe Research’s latest poll suggests 39 per cent of Manitobans believe Kinew’s past is a serious issue that would hinder their support for his party—a number that aligns with PC support levels—while the rest find his past irrelevant or believe that he’s changed.

Kinew’s inarguable baggage is his party brand. The NDP remains riven by divisions from ex-premier Greg Selinger’s days, and its fundraising remains several times lower than the Tories’; Kinew insists his lean campaign operation—a war room down to 15 people, from 70 when they were in government—shows strength and determination to operate smarter. Tory attack billboards feature Kinew, clad in beaded vest festooned with medicine wheels, standing with a suited Selinger.

On the campaign’s final Sunday, a day after Kinew mocked Pallister for stumping outside Winnipeg and most of the provincial media’s glare, the PC leader convened a rally to insist that Kinew should realize there’s a great big province outside the city, where nearly all the NDP’s seats (and hopes for electoral gains) reside. Pallister leaned heavily on his message that the NDP left a lingering mess. “Manitobans have been proud to work with us to lead that cleanup effort, to strengthen the province, to make us Canada’s most-improved province—and we are,” he said.

The incumbent mentioned money on the kitchen table just once on this occasion. Many Manitobans seem willing to forgive him for much—the Costa Rica adventures, the heath-care overhaul problems, the tortured household metaphors. A large swath of voters seem to grudgingly accept what he is and, even if they don’t, greatly prefer his party brand to the alternatives. Tuesday’s election seems likely to bear that out.