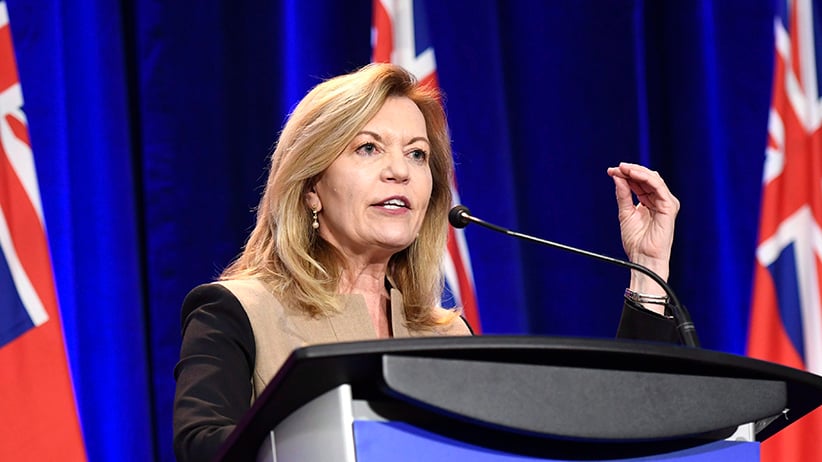 Back when she was on the way to losing her second bid for the Progressive Conservative Party of Ontario leadership in 2015, Christine Elliott’s status as a veteran political insider was turned against her. Patrick Brown, who beat her in that contest, said that when voters rejected the PCs in the previous year’s election, they lumped Elliott in with then-Tory leader Tim Hudak’s old guard. “Let’s be honest with ourselves,” Brown said in a debate jab aimed at squarely at her, “they didn’t just look at Tim Hudak, but they looked at the establishment in our party.”

But maybe “establishment” carries a less negative ring the third time around. In the current race to replace Brown—who was forced to give up the leadership this year after allegations of sexual misconduct—Elliott’s old-school credentials have been dusted off and shined up as a key selling point. “Experience itself is valuable,” says federal Conservative MP Peter Kent, who is backing her. “She’s a very solid, centre-right politician. She has a big-tent approach to trying to form government.”

WELLS: Christine Elliott and the Pips

Elliott, 62, was a Tory MPP from 2006 to 2015, deputy party leader under Hudak for much of that time, and is the widow of former federal Conservative finance minister Jim Flaherty. Her chief rival in this race is Doug Ford, 53, the populist, élite-bashing former Toronto councillor—and brother of the late Toronto mayor Rob Ford. Political neophyte Caroline Mulroney, 43, daughter of former prime minister Brian Mulroney, is generally seen as running third.

A new poll out Thursday morning from the Angus Reid Institute suggests Elliott’s old-school résumé and mainstream persona might lend her considerably broader appeal than Ford among swing voters, and somewhat better than Mulroney’s potential for growth beyond the reliable Tory base. Angus Reid’s online survey, conducted March 6 and 7 among 807 adult Ontario residents, found that 50 per cent of decided and leaning voters say they plan to support the Conservatives in the June election, a huge lead over the Liberal’s 24 per cent and the NDP’s 22 per cent.

Digging below those figures, though, the poll tried to assess the leadership views of potential—but not locked-in—Conservative support. That leaves aside the 25 per cent of Ontario voters who say they definitely won’t consider the party, and the nearly equal 23 per cent who are sure they will support the PCs.

The remaining 52 per cent split between those “certainly” or at least “maybe” considering them. Naturally, that on-the-fence half of the electorate is of greatest interest to party strategists. Angus Reid asked voters in those gettable groups if they were more or less likely to vote Tory, depending on who wins when the party’s online leadership election ballots are tallied on Saturday.

Although counting Mulroney out would be dangerous, most observers see the race likely coming down to Elliott or Ford. Both enjoy solid favorable ratings among voters already definitely supporting the Tories. But among those “certainly considering” voting PC, Elliott scores a strong 43 per cent favourable rating, with 46 per cent neutral, and only 11 per cent seeing her unfavourably. Ford’s rating among the same crucial “certainly considering” group is just 23 per cent favourable, 56 per cent neutral, and a hefty 56 per cent unfavourable.

Of course, the Angus Reid poll couldn’t survey the much narrower band of Ontario voters who are also PC members eligible to cast votes in the leadership race. Still, those core Tories might be influenced by how they assess growth potential. And, after bitter losses in the 2011 and 2014 elections—both campaigns they entered with high hopes of unseating the governing Liberals—they might be in a risk-averse mood.

Elliott is positioned as the safe choice. “She comes across as very smart, very capable. In a dynamic where politics is becoming increasingly partisan, increasingly polarized—although we don’t have that to the degree the Americans do—politicians on all sides respected her,” says University of Waterloo political science professor Anna Esselment, who worked as a policy advisor to former Ontario Premier Dalton McGuinty when he was Liberal opposition leader.

Kent said he respects both Ford and Mulroney, along with the fourth contender, social conservative activist Tanya Granic Allen, but sees Elliott bringing something of the reassuringly centrist appeal associated the 1971-1985 rule of former Tory premier Bill Davis. “Ontarians want a change, but they’ll be more enthusiastic about a centre-right, balanced, experienced politician than they might be by one of the other three,” he said. “In stable times, Ontarians are pretty moderate.”