Indigenous leaders are less than thrilled with Trudeau's cabinet moves

Jane Philpott won respect as Indigenous services minister. Can Seamus O'Regan—a pal of the PM who has yet to distinguish himself in cabinet—fill her shoes? 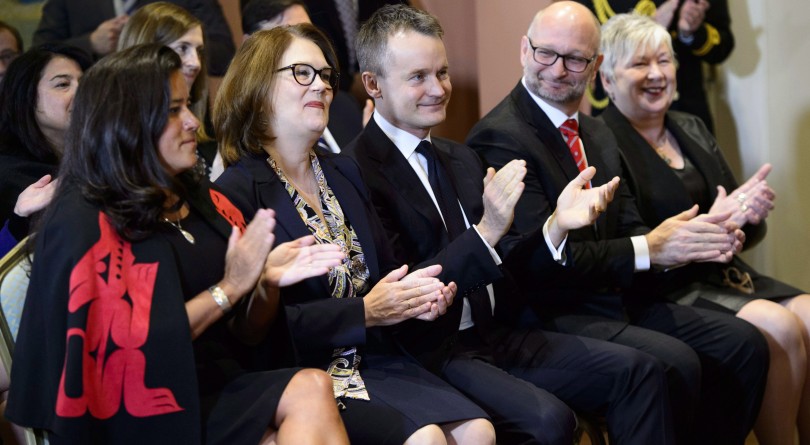 For the third time since 2015, Indigenous people in Canada have a new minister overseeing their access to basic services in their communities. In a sudden cabinet shuffle by Justin Trudeau on Monday, it was revealed that Jane Philpott, the minister of Indigenous services, will become the Treasury Board president, while Seamus O’Regan, the former minister of veterans affairs, will replace her.

Philpott, who held the newly created portfolio for more than a year, moved the dial on issues like child welfare and clean water on First Nations. For Indigenous leaders, her abrupt departure forces them to build a new relationship—one with O’Regan—at a time when some First Nations people across the country seem ready to pronounce reconciliation dead.

“I’m a little disappointed, mainly for selfish reasons,” says Grand Chief Arlen Dumas of the Assembly of Manitoba Chiefs. “Minister Philpott brought a breath of fresh air into the relationship that we had with the federal government and was truly willing do things in new ways.”

Dumas notes that Philpott was approachable when dealing with First Nations leaders, and well served by her experience before politics working as a doctor overseas and later serving as health minister. He says that as far as he’s aware, many of the key officials within the minister’s office will remain with Indigenous Services Canada and he’s prepared “to give them an opportunity to honour their words.”

RELATED: In the Trudeau government, what’s a cabinet shuffle for?

Before walking into an introductory meeting with both O’Regan and Philpott on Monday, Ontario regional Chief RoseAnne Archibald described the former minister’s departure as a “hard loss,” but noted that O’Regan is known as a “relationship builder” in Ottawa. “We have to do rebuilding,” she says, adding that O’Regan’s cabinet experience relieves some of her cynicism. “That’s definitely a bonus—if he were just coming from the backbenches to cabinet, then I’d be a lot more concerned.”

Chief Bobby Cameron from the Federation of Sovereign Indigenous Nations, which represents First Nations in Saskatchewan, acknowledges Philpott as someone who has a “passion for First Nations people” and who made herself accessible. “With any new appointment, many of us are always surprised,” he says. “However, we welcome him because he has a lot of work ahead.”

Still, O’Regan is sure to encounter skepticism. The decision to hand over this portfolio to him is a peculiar one, given his lack of experience on the file and criticism of how he handled the veterans affairs portfolio, a role now held by Wilson-Raybould, the former justice minister who, according to a CBC report, turned down Indigenous services (she is of First Nations heritage).

When Trudeau announced O’Regan’s appointment, he briefly touched on the new minister’s credentials: “He certainly has some experience, as a young person going to Labrador.” O’Regan himself has highlighted that time, along with land-rights work he did in government earlier in his life.

RELATED: Trudeau on the cabinet shuffle, including today’s big move up—and down

And the two are close friends. That much became clear when it emerged that the two enjoyed a controversial vacation together on Aga Khan’s private island in the winter of 2016.

O’Regan steps into the role during a tenuous time between Indigenous people and Ottawa—this after the RCMP raided a camp held by a clan of the Wet’suwet’en in northern B.C., who were protesting a proposed gas pipeline on their traditional territory. “There’s been some unrest and some discord,” Dumas says, adding that despite the unfavourable comparisons between O’Regan and Philpott, he doesn’t believe the new minister “comes without any skills.”

Dumas remembers O’Regan’s days as a host on CTV. “He seems to be someone who makes every effort to be approachable and available,” he says. He also remembers O’Regan showing off his bruised knuckles after hours spent knocking on the doors of constituents prior to the 2015 election.

Cameron is less concerned with O’Regan’s lack of relevant experience—“I’m sure his staff are getting him caught up”—than with what he sees as a shaky grasp of Indigenous issues within the minister’s office. “Some of them don’t really understand what First Nations’ perspectives and positions are. That’s where we as elected leaders come into play. They need some lessons on inherited treaty rights.”

Before he was elected, the PM famously said that no relationship was more important to him than that with Indigenous peoples, and these are words Dumas and others have not forgotten. Cynics might wonder where his friendship with O’Regan ranks in the overall order. Some, however, try to see the bright side of that dynamic.

“With him being Trudeau’s close friend,” Cameron says, “it could be a good thing for us… that could work in our favour.”