Introducing Erin O'Toole in the role of Santa Claus

Election Image of the Day: The Tory leader says his government would declare a one-month GST 'holiday' for retail purchases made this December 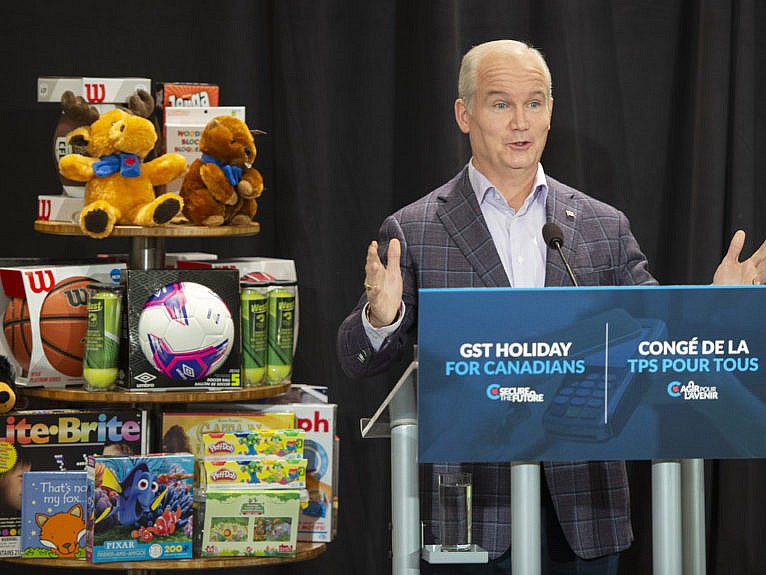 Canada’s poor little goods and services tax has been given a hard time in its 30-year life. Brian Mulroney introduced it amid ferocious opposition; Jean Chrétien promised (and failed) to repeal it; the Atlantic provinces and Ontario warped it into something else; Stephen Harper lopped it from seven per cent down to five. Now the new Conservative leader, Erin O’Toole, wants to declaw it during its busiest month. In a campaign promise that is potentially popular and certainly populist, O’Toole’s Tories would kill the GST in December, offering a five-per-cent reprieve to holiday shoppers and, presumably, deal-seekers who buy everything in the last week of the year. The break would apply only to in-store purchases at retail stores, meaning U.S.-based online retailers are not in for a windfall. But how much would this promise actually save Canadians? One PricewaterhouseCoopers report pegged Canada’s 2019 holiday spending at $1,593 per person. If we assume that figure includes vacations and fancy meals, and isn’t limited to December (since the “holiday season” starts in, what, October these days?), a generous guess could be $1,000 of taxable goods in December, of which five per cent is 50 bucks, which isn’t terribly much for your hypothetical shopper who’s out spending $1,000 on loved ones that month. Of course, calculating how many voters will crunch the numbers on this promise is an impossible task. So is determining how many voters will swing blue because of the pledge.

Correction, 7 p.m. Aug. 17, 2001: Due to an editing error, the original version of this post said the GST holiday would apply on an annual basis; in fact, the Conservatives propose the measure only for December 2021.