Yes, Albertans dislike the NDP, but Kenney shouldn't presume that means they are in favour of his fiscal hawkishness

In the dying days of Alberta’s four-decade Tory dynasty, then-premier Jim Prentice said as the 2015 election seemed to turn away from him: “This is not an NDP province.” Voters cared little for his assertion, or for Prentice himself, blowing his party to electoral smithereens and making Alberta an NDP-majority-led province. There’s a difference between my hyphenated descriptor of the province and the late Prentice’s, and it’s a distinction Jason Kenney is only too happy to emphasize.

In his interview with Maclean’s columnist Paul Wells for the Maclean’s Live series, the former federal minister made a point of bringing up, just to knock it down, the thesis argument from the post-election book Notley Nation by Calgary Herald columnist Don Braid and Sydney Sharpe. They posited that shifting demographics made Alberta younger, more diverse and that created a less ornery and conservative electorate (viz. Naheed Nenshi, three-term Calgary mayor). Kenney prefers to consider Rachel Notley’s NDP as an “accidental government,” and May 2015’s election a momentary spastic twitch away from “free-enterprise” parties as some voters stayed home out of disgust with the status quo and some cast a protest vote. Polls, it should be noted, showed the Alberta NDP leading in late April as the election neared, then in May, and never again in the three years since. Kenney sees a public fuming about deficits, debt, carbon taxes and Notley’s friendly approach to the Trudeau government.

“When I look at the actual matrix of issues, Alberta looks like Alberta to me,” Kenney told Wells. “People want a sensible, mainstream, centre-right free enterprise government, and those kinds of practical solutions.”

There is little question that an election held today would deliver a massive majority for the United Conservative Party that Kenney formed from the old Tory and more right-wing Wildrose parties, and it’s hard to take bets that this won’t be the verdict in next spring’s election, unless you’re trawling for gamblers in NDP cabinet offices. Albertans might indeed not feel they live in an “NDP province,” and the political hunger has been for corrective measures for much of the last three years, as the economy slowly recovers, debt piles up and Canada’s petroleum province carries on with one of its most assertive climate change policy and carbon tax regimes. 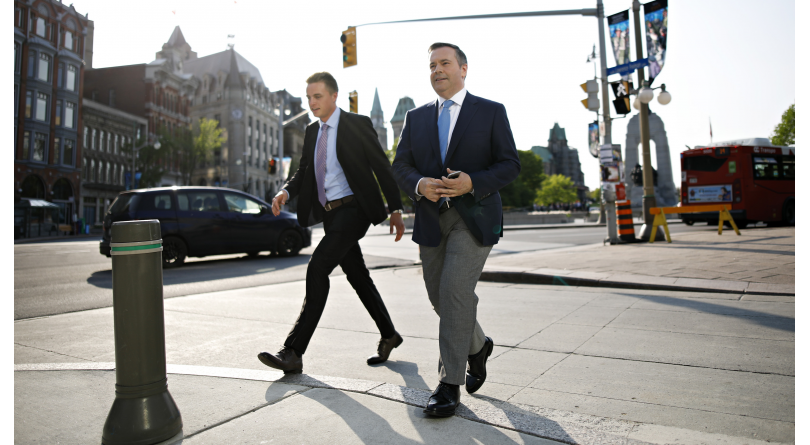 Macleans Live with Jason Kenney at the NAC in Ottawa May 24, 2018. Photograph by Blair Gable

And how does Kenney intend to wield that majority, if current patterns hold into 2019? “I think we’re going to have a mandate to be ambitious with a policy reform agenda,” he said on Maclean’s Live. He’s routinely touted the bold reforms of Ralph Klein in the 1990s as he waged war on Alberta’s public sector and slashed health care and education budgets to erase the provincial deficit, and privatized registries, the electricity system and liquor sales (thanks for the third one!). Kenney cited health and schools and areas to overhaul:

Alberta has the most expensive health system in the country per capita, but we don’t have the results that justify it. I say Albertans should have at least as many choices as British Columbians and Quebecers have, in terms of a mix of public and private delivery within universal insurance. And school choice: empowering parents to choose the best education for their kids; it’s a great Alberta tradition that I think we can amplify.

At the same United Conservative convention at which his party endorsed a resolution that would announce kids’ participation in gay-straight alliance to their parents—which Kenney backed away from—they passed plenty of staunchly conservative platform planks the leader did not quarrel with: a bigger role for the private sector in health care, freeing up more education dollars for private and home schooling, and returning Alberta to the flat income tax that Prentice and Notley jointly undid. While Kenney characterizes the NDP as a group that lucked into government and didn’t have public backing to tax carbon and hike the minimum wage, he should be mindful of exactly why he’s dominant in the polls. It’s because Albertans dislike the NDP moreso than because they love his brand of fiscal hawkishness. The NDP were way behind in second before Kenney relocated from Ottawa and began his party merger project.

READ: Jason Kenney is reaping what he sowed with Alberta’s social conservatives

Albertans, in the last decade of elections leading up to 2015, were given choices between a conservative cuts-minded and reformist party (the Wildrose), and ones that would secure the public services status quo, as Notley and the Tory dynasty’s post-Klein leaders did. The Wildrose always lost. Even Klein’s latter-day attempts around 2005 to inject more private delivery into health fell flat amid public outcry. Weakening the public school system by redirecting dollars to alternative offerings may have become similarly contentious. Kenney may be right that there’s an appetite to tame the deficit and debt, but he risks misjudging the mandate that may await him next year if he thinks that gives him carte blanche to go to town on the shelves of binders from rightie think tanks like the Fraser Institute and American Enterprise Institute. Alberta may remain more of a conservative province than an NDP province, but perhaps to a matter of degree that won’t quite please Kenney’s own ideological wishes.