Is Ottawa both Jason Kenney’s benefactor and his political straw man?

The Trudeau Liberals sprayed the money hose everywhere in 2020 but lent oil country particular support. Yet, in 2021, Kenney still plans to pursue many of his pre-pandemic provocations and retrenchments against Ottawa. 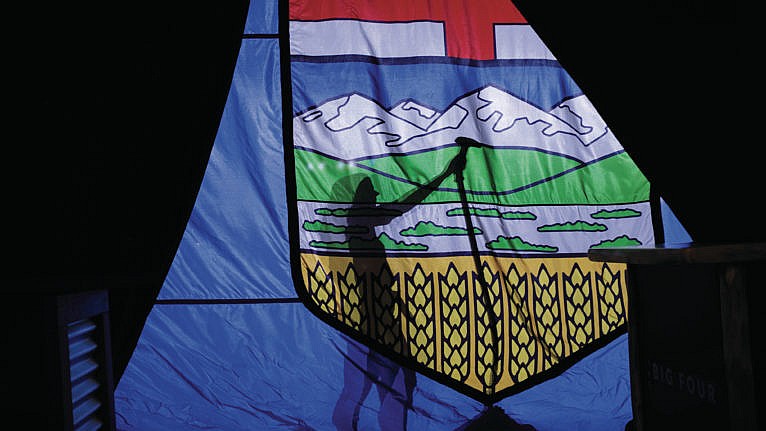 Alberta enters the new year with a swagger, pursuing provocations and retrenchments promised in the aftermath of Justin Trudeau’s re-election (Jeff McIntosh/CP)

A mid-year fiscal update showed Alberta getting uncomfortably close to levels of reliance on the federal government not seen since the grim old days of the 1980s oil slump.

No, despite its battered economy, the province wasn’t getting equalization, the welfare program for have-not provinces that has long been a whipping boy for folks there. Alberta was, however, projected to barely collect more provincial income tax than it would federal transfers—and that was before the extra spending Ottawa kicked in this summer for pandemic relief. Revenue from oil and gas, once the province’s strongest budgetary line item, was forecast to be one-eighth of what Ottawa will be shovelling Alberta’s way.

In a year that reshaped so many of our relationships, the one between Alberta and Ottawa wasn’t immune to change. The province’s once enviable finances took yet another shellacking, and the central government propped them up at unprecedented levels. The Trudeau Liberals sprayed the money hose everywhere but lent oil country particular support, providing major grants to clean up old wells and extending credit to teetering energy firms.

READ: The COVID warning Jason Kenney should have heeded

Despite all this, Alberta enters the new year with a swagger toward the federal government like it’s 1999. Or 2019. It will pursue many of the provocations and retrenchments against Ottawa that Premier Jason Kenney’s United Conservative Party (UCP) either promised in last year’s provincial campaign or proposed in the heated aftermath of Justin Trudeau’s re-election. It will take steps toward a provincial police force and an Alberta-only pension plan, with studies on those ideas due in the first half of 2021. Decisions are pending on its constitutional challenges to Trudeau’s carbon tax and environmental assessment bill. In October, Alberta will “elect” senators whom the Prime Minister is not obliged to appoint, and vote on provincial referendums that challenge federal jurisdiction—including a demand that the equalization principle be yanked from Canada’s Constitution altogether.

There’s more: a provincial parole board that will have control over a tiny fraction of Alberta’s parolees; a new provincial chief firearms officer who will have no power over federal gun laws, but hold some sway over how they’re applied.

Many of these pushes were green-lit by the province’s Fair Deal Panel, struck to find ways for the province to assert itself more forcefully in Confederation after Albertans didn’t elect a single Liberal MP in 2019, yet still got stuck with more years of a Prime Minister Trudeau. The panel heard Albertans air grievances in the months before the pandemic, wrote up its findings during spring’s shutdowns and released them as the first wave of the virus ebbed last June. Donna Kennedy-Glans, a panellist and former Alberta Tory MLA, stepped up to co-write the final report; she had hoped to tone down some of the tough-on-Ottawa actions the group endorsed, while highlighting opportunities to collaborate with the feds on files like economic diversification and moving more federal bureaucracy out west.

READ: What Jason Kenney can glean from past premiers on saving Alberta’s economy

But the final report did not come across as overly collaborative, downplaying the financial risks of going it alone on a pension plan and provincial police force—two of the most provocative policy ideas before the panel. Kennedy-Glans now wishes its tone had shifted even more to align with Albertans’ evolving priorities, including a suddenly reduced urge to attack Ottawa at a time when the province is desperate for help. “We have these constitutional rights, legal remedies and economic levers. We want to pull every one of them that we can,” she says of the province’s fire-all-cannons mentality.

Kenney, despite his province’s shifting economic and fiscal realities—and the fact both Ottawa and Alberta were facing more pressing problems—embraced the panel’s hardline, pre-pandemic recommendations. Having previously threatened a provincial referendum on equalization if Ottawa didn’t meet certain conditions, he now pledged to carry it out. And to be sure, his pugilistic stance has played well with a heavily rural UCP base that ardently supports greater autonomy for Alberta. At the party’s virtual convention in October, clear majorities supported each brick of Kenney’s version of the old Alberta “firewall” agenda.

But their views are at odds with those of the general public. Only 27 per cent of Albertans surveyed in August supported replacing the RCMP, while a mere 23 per cent endorsed replacing the Canada Pension Plan, according to the Common Ground project led by University of Alberta political scientist Jared Wesley. Support for Alberta separation, after a jolt in popularity in late 2019, had receded to 18 per cent. Given Kenney’s frequent references to these proposals as “leverage,” Wesley, a former intergovernmental policy adviser to six former premiers, wonders whether Kenney has tipped his hand, revealing to Trudeau that much of his posturing is a bluff to get Alberta-friendly reforms out of Ottawa. If so, that sends confusing messages to the rest of Canada, says Kennedy-Glans. “It may seem like a throwaway to feed your base,” she says, “but I think the cost to all of us with that strategy is enormous.”

Still, there’s a segment of Albertans who think Kenney is actually soft-pedalling their anger. Drew Barnes, a United Conservative MLA for Medicine Hat, says he constantly hears from people who want Kenney to move faster and harder. Barnes was a Fair Deal panellist and criticized others for not suggesting an independence referendum if Alberta doesn’t get what it seeks, and has talked up separatism himself. He is not committing to stay in Kenney’s caucus if there’s no firm action in 2021. “Probably a year from now I’ll want to see where we’re at and make a decision from there,” he says.

Barnes points to the fall election in Saskatchewan, where the Buffalo party (an offshoot of the Alberta-based Wexit movement) finished a respectable second in some rural ridings behind the incumbent—and unmistakably conservative—Saskatchewan Party. Wary of an opponent creeping up on his right flank, Premier Scott Moe quickly pledged to pursue moves that ape Alberta’s.

Kenney insists he remains a staunch federalist, and sternly denounced the “rabbit hole” of separation when he spoke to the UCP convention. He also stressed his government’s co-operation with Trudeau’s on initiatives like methane regulation, caribou wildlife management and the Trans Mountain pipeline. What’s more, if Albertans want to deter U.S. president-elect Joe Biden from killing the Keystone XL pipeline, the premier needs Trudeau beating the drums on their behalf.

In November, Kenney admitted he’s got some persuading to do before taking the public down the Alberta-first rabbit holes he himself has proposed. “We have to bring along the majority of Albertans on these issues,” he said on the podcast of a former western separatist party leader. “It can’t just be people who are super cranked up and want all of these things done now.”

Some wonder whether doing them all is really the premier’s current motivation. Hated as Trudeau is in Alberta, after all, Kenney’s own popularity here has sagged amid the pandemic, economic slump and his government’s fights with health-care workers. Sabre-rattling against Trudeau may be a deflection tactic, says Wesley, the lead researcher at Common Ground: “He needs to paint somebody else as worse than him, and Ottawa is always a great target.”

This article appears in print in the annual Maclean’s “Year Ahead” issue with the headline, “Friend and foil.” Subscribe to the monthly print magazine here.