Is racism a Canadian value?

Canadians rejected the politics of fear and division in last October's election. Why is it back already? 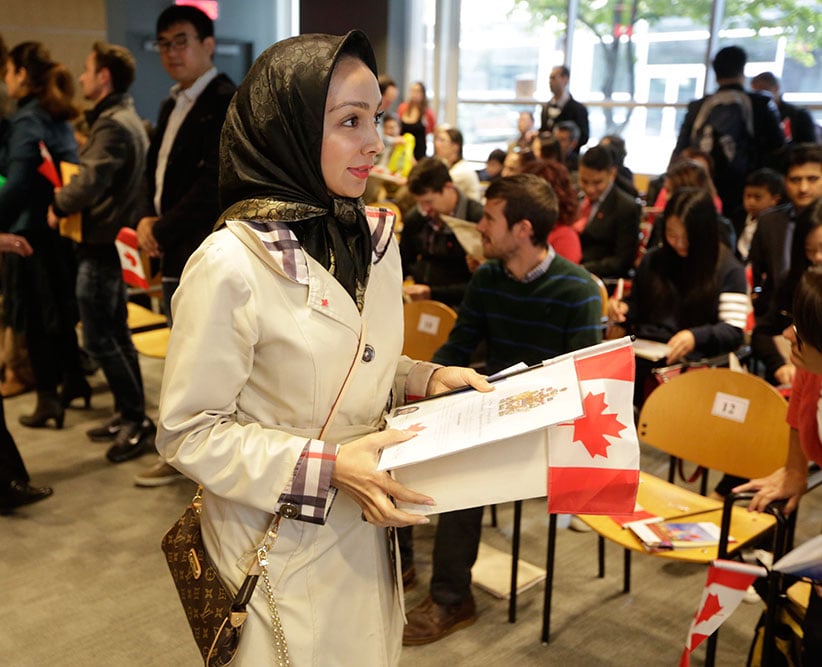 A young woman looks at her official citizenship document that she received at a Vancouver ceremony on Oct 6th, 2015. (Photograph by Brian Howell)

In last year’s federal election, after the longest campaign since 1872, Canadian voters replaced the ruling Conservatives with a seemingly more progressive Liberal caucus. The grind of that campaign was marked by ugliness toward visible minorities, particularly Muslim Canadians. In the wake of the most cynically xenophobic campaign in recent memory, Canada seemed to breathe a collective sigh of relief that the Conservative party’s vision — one in which women in the public service are forced out of their niqabs, neighbourhood busybodies have a hotline for reporting suspicious brown people, and Syrian refugees continue to drown in doomed bids for asylum — would not come to pass. And yet, just short of a year after that “rejection,” it seems Canadians think there’s something to this fear business after all.

“What’s reflective in those numbers is a sense of weariness that Canadians feel,” former B.C. premier Ujjal Dosanjh told me — “that political leaders aren’t asking us to create a more generous and caring kind of diversity. In the U.S., people generally feel that immigrants do more to integrate. But I don’t think that assimilation is the answer.”

I asked Dosanjh why, if Canada supposedly rejected the politics of fear and division in the 2015 election, we find ourselves returning to this well again. “Canadians resoundingly defeated the Conservatives,” he told me, “but that may have happened anyway. They were in power for nine years. Except for Quebec, the last election may not have been a referendum on that question.” Indeed, Justin Trudeau, Tom Mulcair and others were wrong to conflate electoral defeat of the Conservative party with the defeat of intolerance.

Related: How Kellie Leitch touched off a culture war

The Conservatives didn’t invent Canadian intolerance; all they did was give it mainstream legitimacy. Bill S-7 (Or the Zero Tolerance for Barbaric Cultural Practices Act), the most craven dog-whistle the Conservatives managed to pass into law, was supported by the Liberals and is still law. The Barbaric Cultural Practices hotline may have gone nowhere, but its mascots, Chris Alexander and Kellie Leitch, are currently Conservative leadership candidates. And Canadians not only support Leitch’s proposal to apply a values test to potential immigrants, they’re more uncomfortable with their minority neighbours than Americans are. While 68 per cent of the CBC-Angus Reid poll respondents from Canada believe minorities need to do more to fit in, only 53 per cent of American respondents feel that way.

Let’s dispense with the term “minorities” in this conversation, because what we’re really talking about are people who don’t look white—Brown, Asian, and Black people, many of whom can trace their ancestry in this country back farther than those who believe we need to do more to fit in. The question of assimilation, most often phrased as cultural “fit,” has been a question in Canada since our first prime minister argued for the Chinese Immigration Act, as an “Aryan” nation needed protection from “Asiatic principles,” “immoralities” and “eccentricities.” Cultural fit was the rationale for Wilfrid Laurier’s government to exclude Black Americans, last century’s refugees fleeing the atrocities of Jim Crow, from entry to Canada. “The climate and other conditions of this country,” said F.C. Blair, a senior bureaucrat in the Ministry of the Interior at the time, “are not . . . congenial to coloured people.”

The assimilation question in Canada is not new. It is not a blip on our cultural radar, and it can’t be defeated at the polls. The racist doctrine of Canadian assimilationism is the other side of xenophobia’s coin, and it is one of this country’s darkest strains of thought. Assimilationist politics spurred politicians to turn back the Komagata Maru’s Indian passengers in 1914, and to detain the MV Sun Sea’s Tamil passengers in 2010. Assimilationist politics drove the cultural genocide of Canada’s Indigenous communities for the greater part of the 20th century. They continue to do so in Children’s Aid services in many provinces, where Indigenous and Black youth represent children in care at rates wildly disproportional to the general population. When a candidate like Kellie Leitch hoists the Canadian flag, declares a candidacy based on assimilationist politics, and two-thirds of the country agrees with her, we can safely say the politics of fear and division were not defeated.

As much as we love to think of ourselves as a diverse and tolerant nation, we need to deal honestly with an inconvenient fact: racism is a Canadian value.