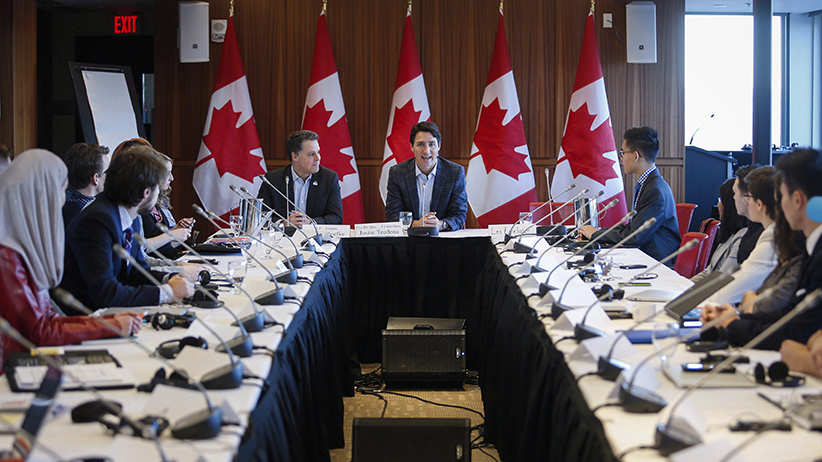 Chris Zhou of Charlottetown is 18 years old and has met the entire Liberal cabinet. As a member of the Prime Minister’s Youth Council, he was flown to Calgary in January and ate Indian food alongside ministers Armajeet Sohi, Catherine McKenna and Ahmed Hussen, and spent about five hours with Justin Trudeau. He had already met the PM at a previous meeting in Ottawa, though the leader skedaddled after 15 minutes. “He planned to stay longer,” Zhou recalls, “but he had to go to Israel for official functions.”

The Prime Minister’s Youth Council was started by the Trudeau government in January 2016 with a mandate of gathering non-partisan policy advice from young Canadians. The council now includes 26 members aged 16 to 24, from Nunavut to Newfoundland to Penticton, B.C., who travel up to four times per year to meetings across Canada, discussing topics including diversity, immigration and mental health. Their flights, accommodation, chaperones, venue rentals and monthly stipends are covered by taxpayers, who will spend around $400,000 this year on the council.

The program may achieve its stated goal of bringing young voices to government ears, so the government can better understand the next generation’s priorities. But critics wonder if it also serves a more partisan purpose. The Prime Minister’s Office has been hushed about what the youth learn from their training materials, and while participants have befriended many a Liberal, they haven’t been introduced to many opposition MPs, sparking claims that Canadians are spending hundreds of thousands annually to help the Grits woo young people.

“I’m the critic for youth, so why did I not have any meetings with them?” says NDP MP Anne Minh-Thu Quach, who sponsored a petition demanding to see the council’s meeting minutes. “If it’s public money that’s invested in those meetings,” she says, “we should be able to know if it’s really a Liberal thing or a non-partisan council. We don’t even know their agenda.” Quach raised the issue during question period in February and submitted a written inquiry of the Privy Council Office, which provides administrative support to the council. “We know that for the moment, young people are not really allowed to tell others what they are talking about during those meetings,” she says.

Upon joining, council members signed a confidentiality agreement, which includes not sharing any “confidential” information to “any person outside the Youth Council.” They require “written guidance from the youth secretariat [of the Privy Council Office] before sharing any materials about the Youth Council that are not already in the public domain.”

RELATED: More money from Trudeau for summer jobs, but is it working?

The PMO declined to send a copy of the training materials to Maclean’s, stating in an e-mail, “the ways we advise members of the Youth Council is continually evolving and not prescriptive in nature.” Council members describe the lessons diplomatically: “Of course, we have a Liberal leader so we’re going to hear about all the incredible work the Liberals are doing, but not in vain of the other [parties],” says 20-year-old Mustafa Ahmed of Toronto. “We’re just getting to see the sacrifice that has to happen to reach certain goals.”

More than 17,000 young people applied to be on the council, after the government sent out a call for applications last winter through social media and youth groups. From a shortlist of 300, 15 were initially chosen, before another 11 were added in January 2017. The selectees range from Hani Al Moulia, a Syrian refugee, to Nmesomachukwu Umenwofor-Nweze, a young woman from Nigeria who grew up in Iqaluit.

The Privy Council Office confirmed that the first meeting with all 26 members was a three-day affair in Calgary, timed around a Liberal cabinet retreat in the same province. They stayed in a hotel on the University of Calgary campus with two chaperones hired through Encounters with Canada, a youth program run by Heritage Canada. After the group checked in the first day, recalls Ahmed, “they gave us booklets upon booklets and notes upon notes.”

Media training followed. They talked about potentially “tricky or controversial questions” the press might ask about the council and how to answer them, Ahmed recalls. Zhou says they considered appointing a spokesperson but decided against it, and that they also learned how to maintain a social media presence. Most members have Facebook profile photos of themselves standing with Trudeau. Opposition members are skeptical: “Why would they receive media training?” asks Quach. “Is the government afraid of what they could answer? If so, why?”

Some of the youth did get a chance to meet two opposition MPs. At the first meeting in Ottawa, the local MP for each council member was invited to a lunch, regardless of party. The NDP’s Richard Canning of South Okanagan-West Kootenay showed up, as did Hunter Tootoo of Nunavut, a former Liberal cabinet minister who now sits as an Independent.

The Privy Council Office says the expenses for the inaugural meeting in Ottawa in September 2016—with the first 15 members—were $53,000. Costs of the Calgary meeting, with the full cohort of 26, totalled $83,000. The next in-person meeting will happen in Montreal in May, followed by up to two more throughout the year. If the costs are similar to the Calgary trip, the total will exceed $330,000.

Adding to the price is members’ monthly stipends. “We’re not really supposed to talk about that,” says Ahmed. But another council member told Maclean’s each participant gets $200 per month, part of which may go toward organizing events in their hometowns. This money is honoraria for participating in monthly teleconferences and writing reports on their community activities, surpassing $62,000 per year for the entire group.

The youth have spent about six and a half hours total in-person with the Prime Minister, who appointed himself the minister of youth (though he’s the only minister without a mandate letter). “We have real access,” says Ahmed. “He leaves his line open for any moment we need to call him. We can e-mail him. It’s empowering to know that I could set up a call with the Prime Minister of my country.”

RELATED: Why the electoral reform sham will breed cynicism

In fact, council members contact Trudeau through the youth secretariat of the Privy Council Office, but they do get prompt replies. After the PM backtracked on his election promise for electoral reform, the council collectively wrote a letter asking him to reconsider. Zhou recalls Trudeau responding that he was “looking out for the interests of Canadians,” and adds: “He thanks us for [our] engagement, and encourages us to keep on advising and even criticizing him on these issues.”

Whatever the interaction with the PM, critics are more worried that all 17,000 applicants to the council were asked to sign off that their information could be stored. The Privacy Notice Statement says the information will only be used, at an applicant’s consent, to send e-mail updates on youth engagement opportunities from across the government. Rachael Harder, Conservative critic for youth, accuses the Liberals of storing it for the next election. “It would appear this is simply an exercise in gathering information,” she says. “The Prime Minister can exploit these people for garnering support financially and through votes.” The Prime Minister’s Office says such claims are “categorically false” and that applicants are regularly sent information about other opportunities, like participating in the Youth Climate Change Forum and Youth Disability Forum.

Council members say they would like to meet more opposition MPs in the future—and they may do so on their own time even if the panel’s agenda doesn’t ensure it. Through a recent university conference in Ottawa, Zhou sat down with NDP MP Nikki Ashton, while Ahmed, a poet and singer-songwriter, performed in 2015 at a New Democrat campaign event. In fact, he declares, “I have a relationship with Thomas Mulcair. He’s a friend of mine.”

This story has been updated to include comment from the Prime Minister’s Office.