It says here that Andrew Scheer should try to look natural

Election Image of the Day: A comically contrived photo-op reflects the state of the campaign: reduced to scripted platitudes about the middle class 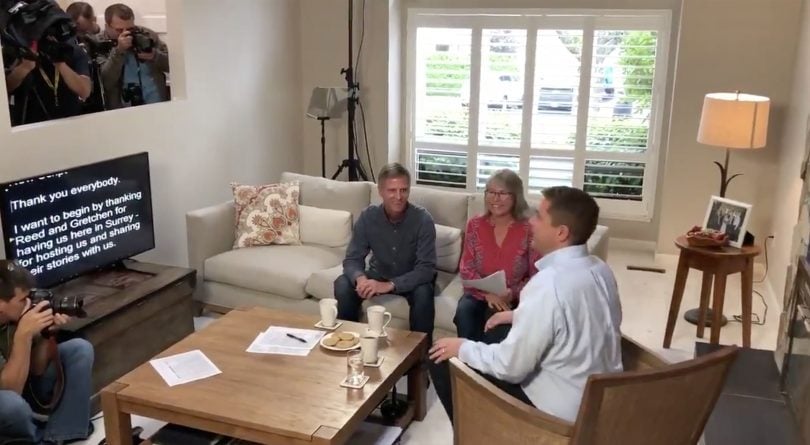 Video still of Andrew Scheer in Surrey, BC. (@CBCKatie/Twitter)

Surrey, B.C., is more than 4,000 km from Ottawa. But the city apparently brings back memories for Conservative leader Andrew Scheer, who “grew up in a very middle-class home in an end-unit townhouse”—or so he said on Sunday, reading from a television-turned-teleprompter in the living room of a couple with the conveniently middle-class names Reed and Gretchen. Critics rightly laughed at Scheer’s feigned empathy (can the man not improvise a little when chatting up his own childhood?). But the whole fiasco spells out a deeper trend: the middle class has become a serious flashpoint during this election cycle, while climate change, pipelines, murdered Indigenous women, foreign policy toward China and white supremacists quickly fall wayside to which party leader can shave a hundred bucks off a household’s annual taxes. Reed and Gretchen might think Scheer’s the right guy; others will see through him as easily as we can see his script.

FILED UNDER: Andrew Scheer Election image of the day teleprompters