From the archives: Retired Lieutenant-General Romeo Dallaire on girl soldiers and life post-Rwanda

This interview was originally published in Maclean’s on March 12, 2007. 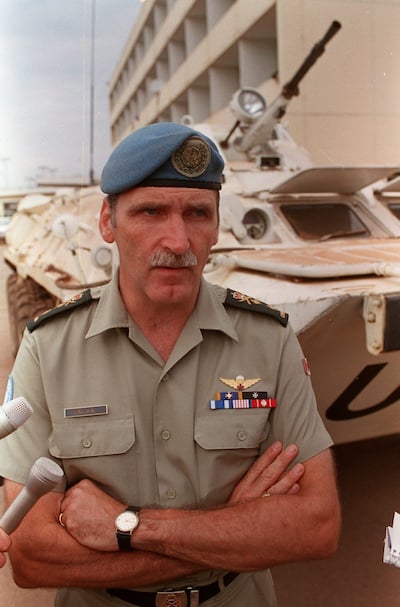 Major-General Romeo Dallaireat in a picture taken at the Kigali airport on Aug. 1, 1994. (Ryan Remiorz/CP)

A: At any given time. There are many casualties, of course. It’s estimated that two million have been killed in the last 10 years or so.

A: The LRA [Lord’s Resistance Army] in northern Uganda, which is also operating in southern Sudan and even a bit in the Congo. The Congo itself. Sierra Leone, which is now pulling itself out of its conflict. Burundi, also. Sri Lanka is using child soldiers extensively. In some countries, like Burma,it’s part of government policy to use children below the age of 18 in government troops.

Q: Is this a new phenomenon?

A: Yes. Of course, we can go back to the Greeks, where they used to take young boys and train them for years and years, and when they achieved adulthood, whatever was perceived to be adulthood at that time, they went off to war. But in the late ’80s and early 1990s, we saw, first of all, the introduction of girls as child soldiers, doing everything from front-end fighting troops and leading other children — girls can be just as ruthless if not more so than boys — to running the logistics base, the bivouacs, and being sex slaves and bush wives. The second phenomenon is the decreasing age of child soldiers: they’re right down to eight or nine years old now, and the primary reason for it is that weapons are so light that a nine-year-old can carry them, maintain them and shoot them reasonably effectively.

A: Interestingly enough, once you put an AK-47 in their hands, they are as effective as adults. They can shoot, mutilate, kill, manoeuvre, overwhelm a position — on the actual battlefield, they are doing everything adults can do, and sometimes with even more verve than an adult might. They can be influenced so strongly, and their ability to retain values and ethics and rules is much more limited than adults’ ability, so they’re in one sense more flexible.

They can be good leaders, too. I’ve seen a 14-year-old who’s been a child soldier for three years commanding a platoon of 30 or 40 other kids, and they show enormous deference to him. You can see the innate leadership skills of the individual, and he’s experienced, but has been totally warped by the nature of the conflict and also by dependency, often on drugs.

Q: In Sierra Leone in particular you hear about the kids being given stimulants to rev up for battle. So this is widespread?

A: Sometimes it’s booze, sometimes drugs, depending on availability and the nature of the conflict. Other times, it’s just outright fear: the kids are more scared of the adults behind them than what they might be facing upfront. There are cases, as in the LRA, where they use mystic voodoo, and say that children are impervious to bullets, and give them artifacts from the more pagan dimensions of the culture, and the kids become convinced that they’re invincible.

Q: Are they typically recruited or forced into military service?

A: The vast majority are simply ripped right out of their villages and hauled into the bush. They’ll kill a few to establish discipline immediately,and then they’ll pair them up; if one escapes, the other is killed outright. They indoctrinate them, feed them information about who’s killing their parents and things like that, and on occasion they’ll bring them back to their original village to kill or mutilate someone, so they can never return.When we are able to demobilize them and rehabilitate them and reintegrate them, the boys are easier because these are male-dominated societies, and the boys can do their warrior thing. Although it’s in extremis, the societies can  handle that and their families can handle it. You teach them traditional skills, how to be a cobbler, carpenter, so they’re coming back with something. But for every 10 boys you demobilize, you’ll get maybe one or two girls.

A: The reason is the girls are too important an asset: not only can they shoot and kill and fight, they also run the logistics and they’re the sex slaves, and often have maybe one or two children by the commanders. Secondly, when we do get them out, they are nearly impossible to reintegrate, because in these cultures, the girls are viewed as “spoiled” if they’ve been raped or maybe given birth to a child, and that makes them unacceptable to the family and the society, so they are left aimlessly bouncing around in refugee camps or between villages. I think the worst thing is that the girls actually feel guilty about their plight.

Q: Are there any strategic advantages to using children as soldiers? Such as, adults won’t fire on them?

A: The advantage that’s to be gained is, as far as I’ve been able to discern, very practical and pragmatic. In some cases there aren’t enough adults, because of AIDS and so on, and in other cases these rebel groups don’t seem to be able to convince the adults, so they abduct children. And in some countries they use them because they’re cheaper than adults as government forces. You know, there’s a whole bunch of NGOs and academics researching the recruitment side of this, and a lot of people have been working on demobilization, reintegration and rehabilitation, which is absolutely essential. But what I discovered is, nobody’s looking at the actual use of child soldiers. Why is this child soldier weapon system the most sophisticated, low-technology weapon system on the battlefield today?What makes that weapon platform so effective? In my research, I am dissecting that in order to neutralize it, to render it ineffective.

Q: Given the apathy of much of the developed world toward these conflicts in the first place, how do you get people to care about the fact that young kids are involved?

A: If you look at our horror of using chemical weapons, or biological weapons or nuclear weapons — how come we’re able to accept that children can actually be exceptionally effective instruments of human destruction? If I were a cynic, or a pessimist, I would simply say everything is based on the self-interest of the developed countries — the fear of casualties, and simply not wanting to commit any political capital to operations or situations that have risk and are not involved in our security — and I would say to hell with the whole damn thing and stay home. I believe, however, that because we’ve seen so much movement on human rights, because we have seen in fact the optional protocols [banning the use of soldiers under the age of 18]and the work done in the UN, because the international criminal court now exists and is starting to indict people who actually use child soldiers,because rape is now a crime against humanity, and the girls are raped and some boys are too, and ultimately because the use of child soldiers is now becoming more identified as a crime against humanity, I think we can break the logjam. I’m not saying we’ll do it overnight.

But there are all kinds of alternatives my research has tried to bring forward. Like, if you know you’re facing child soldiers, why not use non-lethal weapons instead of lethal ones? Or a different set of tactics in order to get at the adults leading them versus the children?

Q: You’ve spoken openly about your struggle with post-traumatic stress disorder after heading the UN peacekeeping mission in Rwanda, and your subsequent suicide attempts. Are you concerned that immersing yourself in a cause like this, and in a fresh set of horrific images, will re-traumatize you?

A: I’ve been eight years in therapy. I still take my medication. And I remain vulnerable when some circumstances present themselves. But it hurts less when you’re busy like this. Getting something done that might be of use seems to override everything else.

Q: Don’t you feel, though, that you’re once again tilting at windmills?

A: Don Quixote is my hero, so I’ve got no problem with that!

Q: In Canada, you’re widely viewed as a hero because of your attempts to mobilize the UN both before and during the Rwandan genocide. But you don’t see yourself as a hero.

A: No. My mission failed. I don’t consider that particularly mature on our part, to fling “hero” left, right and centre, the way we do.

Q: Is your sense of guilt, both about what you could’ve done better and your survivor guilt, exacerbated by being called a hero?

A: There were years when I would rebel against it, and it created enormous,enormous tension both within me, and with the people who would mention it. Now I don’t even listen to it anymore. The only positive I pull out of this stuff is when I left Rwanda I promised I’d never let the genocide die.

Q: The movie version of your book Shake Hands with the Devil is coming out this year. Do you ever long for a more private life?

A: I had some very terrible times with living. One of the issues was that I would never be able to be who I was before, meaning returning to what was normalcy before Rwanda and the traumas, and not having Rwanda around my neck.

And realizing that this thing is going to be with me for the rest of my life, and that I will never be able to separate myself from it. That requires some hefty work with my therapist.

Q: Aside from work, what do you enjoy doing?

A: Watching the Super Bowl with my sons. I also enjoy watching golf on TV. I think that’s got to be the most therapeutic, calming thing you can invent:the beauty of the colours, even the announcers speak softly.

Q: Is joie de vivre possible, after what you’ve been through?

A: You know when you have that warm, fuzzy feeling in your tummy, of serenity and joy, when your tummy is laughing? I haven’t found that yet. Maybe someday.

Q: What do you view as your greatest professional accomplishment?

Q: Bearing witness to the Rwandan genocide isn’t an accomplishment?

A: No, that’s a responsibility. A duty.

Q: What do you view as your greatest personal accomplishment?

A: Having failed to kill myself.

Q: Since we’re on the topic, what do you hope it says on your gravestone?

A: I don’t know. We finally have started the creation of a national cemetery for our military, in Beechwood in Ottawa, and one of the incredibly significant criteria is that whether you’re a three-star general or a private who’s been in for a year, your headstone is exactly the same as everybody else’s.

Q: You want to be buried there rather than with your family?

Q: Why? It seems that your family has been so crucial to your recovery.

A: But it was life and death with the soldiers who were with me.