Jagmeet Singh is dancing like he won the election. There's a reason for that.

New Democrats were in full celebration mode after their leader pulled their party back from the abyss. Now the hard part begins. 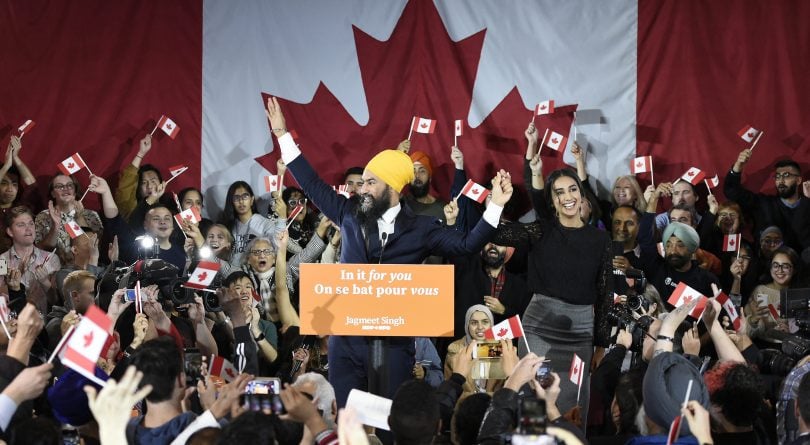 Singh and his wife Gurkiran Kaur wave to supporters on stage at NDP election headquarters in Burnaby, B.C., on Oct. 21, 2019 (Nathan Denette/CP)

There was a moment in the English leaders debate when NDP leader Jagmeet Singh urged to Canadians to reject the notion they must vote for one of Canada’s two dominant parties. “You don’t have to choose between Mr. Delay and Mr. Deny.” The remark may have been scripted, but after Monday night’s election results made it clear Canadians would have a minority government, with the NDP possibly holding the balance of power, it seemed prescient. Even though Singh lost seats, there was a feeling the NDP had gained power.

Still, Singh’s supporters were hopeful. There wasn’t a person at his celebration at the Hilton Vancouver Metrotown who seemed to feel the campaign had failed. “Going into this campaign, expectations were very low,” Raj Sihota, the executive director of the B.C. NDP, acknowledged. There was some speculation the NDP might not even be able to hold onto party status. Singh delivered, she said. “He ran an energetic campaign and he inspired people. It’s a good base from which to build.”

Singh’s tenure as party leader got off to a rocky start. Without a seat in Parliament, he had trouble gaining traction after being elected leader in 2017. There were a few bright moments—photos of his 2018 proposal and subsequent marriage to Gurkiran Kaur caused a fleeting buzz on social media. He chose to run in a byelection in Burnaby South, a riding vacated by former NDP MP Kennedy Stewart who stepped down to run for mayor of Vancouver. It was a risky move. Stewart hadn’t won by a large margin, and Singh, whose political career was forged in Ontario, wasn’t well known in B.C. He won the seat, but heading into the election was faced with the resignation of a string of long-time NDP MPs, including veterans Nathan Cullen from B.C., Hamilton, Ont.’s David Christopherson and Singh’s predecessor as NDP leader, Tom Mulcair.

Singh’s greatest challenge was the two years prior to the campaign, says Glen Clark, the former NDP premier of B.C., who attended the celebration. “He had a lot of incumbent MPs retire, and raising money was difficult. But I thought he ran a nice campaign and he carries himself so well, it’s refreshing,” Clark said. Patrice Pratt, a former B.C. NDP provincial party president, said it’s always a challenge for a new leader to forge their own style. “Always these new guys have to find their feet, find their voice.”

There was a freshness about Singh’s campaign that was reflected Monday in the youthful, diverse crowd of cheering supporters. Even the choice of music—Imagine Dragons and his campaign’s signature song Differentology (Ready Fi Di Road) by Bunji Garlin—skewed young. Darian Russo, a recent university graduate who worked on Singh’s campaign, said Canadians responded well to Singh during the campaign. “The more they saw of Jagmeet, the more they liked him.”

And while Singh didn’t set out to make racism an election issue, it became one after the photos surfaced showing Prime Minister Justin Trudeau dressed in blackface as a young man. Singh’s response, which was muted and heartfelt, spoke straight to racialized young people, reminding them they have value, worth and are loved. It meant a lot to Sukhpreet, an NDP supporter and Sikh who wears a turban. “I’ve been in those situations where I’ve gotten angry and sworn,” he said. “He’s shown us and the next generation how to deal with racism.” Sukhpreet Singh said the NDP leader got a rough ride at the beginning of the campaign: “The media was hard on him. Canadians were hard on him.” But the rookie leader weathered all that and ran a great campaign, he said. “For us it’s twofold. We’re proud of the party and we’re proud of Jagmeet as well.”

Singh’s supporters hope that the NDP will now have increased power, pointing out that past minority governments yielded Medicare and pension plans. In his election night speech, Singh promised to push for even greater gains. “New Democrats are going to be working hard to make sure your life is better,” he promised. “That Canadians’ lives are better.”