Jagmeet Singh, the 'racist' label and what Parliament won't abide

Jen Gerson: Has the social-media age overtaken the rules of the House? 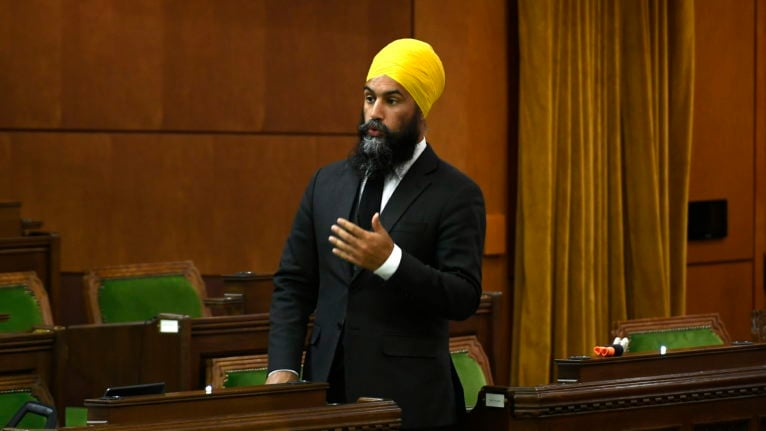 Singh rises Wednesday during a meeting of the Special Committee on the COVID-19 Pandemic. (Justin Tang/CP)

In this woebegotten year of 2020, blessed is the politician who can stumble into a scandal perfectly tailored to the tyranny of Twitter.

As protests, riots, and rage make their mark across the world in the wake of the murder of George Floyd, NDP leader Jagmeet Singh got himself ejected from the House of Commons for calling Bloc MP Alain Therrien  a “racist.”

It was an act of civil disobedience, well suited to the passions of the moment, that generated overwhelming support for Singh.

“Only in a racist country does a brown man get ejected from parliament for insisting that the denial of systemic racism is racist,” was a fairly typical, and popular, example on Twitter.

RELATED: Jagmeet Singh gets the boot, but doesn’t back down

I’m not interested in disputing the point, but rather deconstructing it. So let’s start, for a moment, with the prim prohibitions on unparliamentary language.

In keeping with the long-standing “tradition of respect for the integrity of all Members,” elected officials are barred from using personal attacks, obscenities and insults while in the House of Commons.

And, yes, I’m mentioning this point mostly for the joy of listing off some of the language that has been deemed “unparliamentary” in the past, including, my favourite; “Honourable only by courtesy” (ruled against in 1880), “Coming into the world by accident,” (1886) and “The political sewer pipe from Carleton County” (1917).

Whatever else we can say about the state of our political culture, the quality of our insults has declined alarmingly.

There are a few examples in the parliamentary record of the term “racist” being used in the House. In several instances, the record can’t identify who said it. Or the subject of the insult failed to call a point of order on the matter.

The most recent comparable example I could find dated to Jan. 29, 2003.

On that day, the Hon. Jason Kenney (who went on to become premier of Alberta) stood on a point of order and stated: “I just clearly, audibly, heard the member for Malpeque say twice, “They are a bunch of racists.”

The acting Speaker admonished: “Members will know, of course, that these types of words and references are not helpful to civil debate.”

At which point, the Honourable member of Malpeque—Wayne Easter—withdrew the comment, and everyone continued with their day.

And that is, generally, how unparliamentary language is managed. One does not simply get automatically expelled for using unparliamentary language—there is a procedure in place by which the Speaker is called to rule upon the use of a term. In the heat of debate, an esteemed Member will accuse his opponent of being a “sleazebag,” a “trained seal” a “Nazi” a “Canadian Mussolini” or a “piece of sh–,” etc., etc. These things happen, and the prose of the press corps is generally richer for the slip.

The offending member is called upon to apologize and, if he or she refuses, is ejected from the House.

With these conventions and rules well established, Singh stood up in the House of Commons this week to claim he had a “unanimous consent motion” for a motion which did not, in fact, enjoy unanimous consent. In addition to asking that the House recognize that there is “systemic racism in the RCMP,” he also demanded the RCMP release all “use of force reports and the associated settlement costs.” His motion called for an “increase in non-police investments in non-violent intervention, de-escalation, and mental health and addictions supports” and to launch a review of the RCMP’s use of force, including “the tactics and the training that is given to RCMP officers in dealing with the public.”

Now I don’t wish to get too lost in the weeds, here, because as a journalist, I find much in this motion to admire. All use of force reports and associated settlement costs, you say? Yes please!

However, Singh must surely have known that such an expansive motion would be unlikely to pass with perfect agreement.

So what happened next was interesting.

Although the exact insult wasn’t recorded, Singh appears to have called the Bloc MP Therrien racist for rejecting his motion.

Bloc MP Claude DeBellefeuille objects on a point of order: “The NDP leader shamelessly called the member for La Prairie racist. That is unacceptable in the House.”

Singh responded: “Yes, I did call him a racist, and I do believe he is.”

Under the rules of parliamentary decorum this had now escalated into something of an affray.

Hughes decided to punt the matter to the Speaker proper, who rules against Singh, and ejects him from the House for the day.

As for the motion, it is Bloc leader Blanchet who took responsibility for declining to support it:

“Yesterday we also accepted the NDP’s request to recall the Standing Committee on Public Safety and National Security,” he explained to the House. “The motion seemed to be dictating the findings of the committee that would ultimately be recalled. It did not make sense to us to support the tabling of the motion and it seemed more logical to allow the committee to do its work.”

“That would be me, Madam Chair,” Blanchet concedes. “However, I am deeply convinced that there is nothing here that cannot be easily resolved with a simple and sincere apology. Then we can move on to another debate.”

Whether Blanchet or Therrien or both deserved to be called racist is not for me to say. I am merely an observer of politics.

It seems fair to observe that Parliament is more tolerant of racism than the word “racist.”

But if we spend a little time digging through the rot, sometimes we find the wood from which we can shape and fashion our better world. Perhaps our near future could include a Beauchesne’s Rules & Forms of the House of Commons of Canada, Twitter edition. Words change. Their meanings gain and lose their sting. If a majority of MPs wished to consider the term “racist” to be deemed fair parliamentary language, perhaps they could make it so, though I’m not sure they would enjoy the result. Start honing your insults now, I say.

In the meantime, through his act of well-timed civil disobedience, Singh won the day’s news cycle. I even see #IStandWithJagmeet is trending. For a leader who has struggled to advance his agenda amid the din around Covid, an economic collapse and continent-wide unrest, I cannot help but applaud.