The NDP leader switches seamlessly from formality to so-called 'multicultural Toronto English,' sounding educated and down-to-earth at the same time 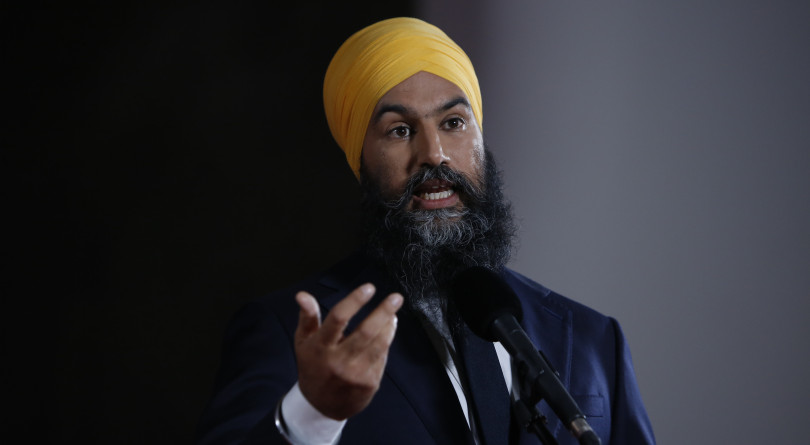 Jagmeet Singh, leader of the NDP, speaks to members of the media following the federal leader's debate in Gatineau, Quebec on Oct. 7, 2019. (David Kawai/Bloomberg via Getty Images)

When it comes to likability, Jagmeet Singh has gained ground against the other leaders in the election campaign, after impressing Canadians in two English debates.

There are reasons for that, and they might not all relate to policy. Singh’s relatable manner of speech and his ability to switch between multiple speaking styles could be major reasons he’s gained the admiration of watchers during the televised face-offs.

“He’s a very skilled user of a number of different registers of language,” says Sali Tagliamonte, a linguistics professor at the University of Toronto. “He can speak very formally when it’s required of him, but he can also talk to people, the common people on the street.” The linguistic term for this phenomenon is “code-switching.”

It’s something a lot of politicians do, says Tagliamonte, while others choose to own a certain way of speaking as a way to establish identity; René Lévesque the former separatist premier of Quebec, she notes, never wavered from his distinctive French-Canadian dialect.

But few who switch back and forth do so with Singh’s fluidity. His ability to effortlessly switch from a formal way of speaking to include looser parlance can be seen in this clip from the second English debate, where the NDP leader is responding to Maxime Bernier, the People’s Party of Canada leader.

He breaks out of a high-brow debate mode in his answer quite naturally, using the word “man,” and with that subtle shift, he’s showing that he’s educated and capable yet also someone who understands those around him, says Tagliamonte. “He’s doing that with his language,” she adds—not just with the words he chooses, but how he says them.

Compare that to an even less formal conversation he had with a student at Ryerson University the very next day, talking about his big Instagram news: the pop star Rihanna had started following him.

We are currently in the riding of Toronto-Centre, that’s @Bill_Morneau’s riding. Yesterday in the debate and the NDP online accused Trudeau’s Finance Minister of using from offshore tax havens. pic.twitter.com/R3mTVLx5MK

Denis says a characteristic of this particular multiethnolect is noticeable in the “o” vowel sound in Singh’s “yo.” Rather than moving his jaw to turn two vowel sounds into one (a diphthong—that would sound like “yuh-oh”), Singh uses a monophthong, where the jaw is still while making that “o” sound, so more like “y-OH.” Toronto slang and multicultural Toronto English are heard a lot in the suburbs of Toronto, including in Brampton, where Singh was an MPP and where Denis happened to have collected some of his research. This type of pronunciation is also common in Jamaican patois, Nigerian English and Indian English, to name a few, says Denis.

If you’re not attuned to this way of speaking, it would be difficult to pick up, he adds. Singh uses this vowel form sometimes and many other times he uses the normal “o” sound. (While he was born in the Toronto suburb of Scarborough and was an MPP in Brampton, he spent much of his upbringing in Windsor, Ont.) What stands out is his ability to naturally incorporate informality into speech without it sounding like a put-on.

That might appeal to multiple demographics: to university students in downtown Toronto who appreciate his use of slang and multicultural Toronto English, but also to those in rural Ontario, where informal language is everyday-speak. His ability to have both a distinct “work voice” and a “talking to friends” voice is something every Canadian can relate to—he just does it on a public stage.

Singh, a language chameleon, stands in contrast to Liberal Leader Justin Trudeau. Unlike Singh, who subtly adjusts his language register based on whom he’s talking to, the PM often sticks to one, somewhat stagey style of speaking. Even in a video clip from earlier this month, where two children asked him some hard-hitting questions, Trudeau spoke exactly as he would elsewhere on the campaign trail, at a press conference or at a leaders debate, notes Denis.

Trudeau’s father Pierre, notes Tagliamonte, “always had this very formal way of speaking, so [Justin] comes to this very naturally.” That’s not a bad thing, she adds; it’s just part of the PM’s persona. His default to formality could be linked to his 2015 campaign, when a barrage of Conservative attack ads accused Trudeau of being “not ready” for the role. “We feel the pressure to improve the way we speak based on the job we go into,” she says. That’s something many people can relate to.

As a result, Singh sounds much younger than Trudeau, even though they’re just seven years apart in age. There is a perception that Toronto slang and multicultural Toronto English, elements of which make their way into Singh’s speech, have a “youthful aspect,” says Denis.

Fortunately for Singh, his language fluidity works in harmony with his whole “for the people” messaging schtick. “He wants to be a leader who listens to the people. He doesn’t want to just talk to the billionaires,” says Tagliamonte. “He wants to be someone who represents everyone.”