Jason Kenney and the UCP sweep to majority in Alberta election 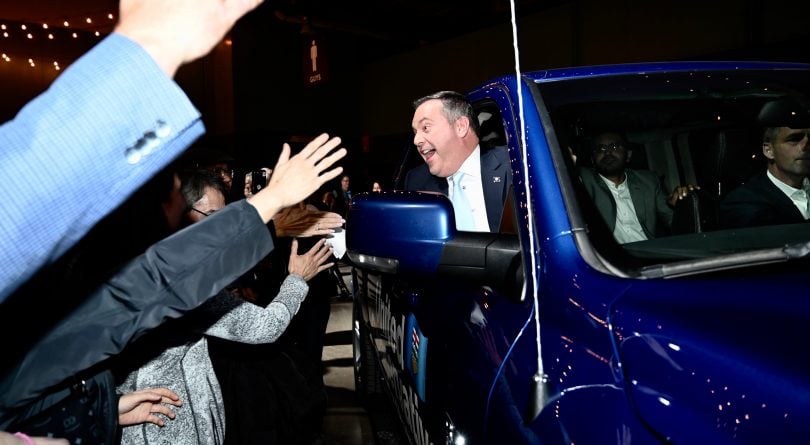 Alberta's premier-elect Jason Kenney rolls in to celebrate his win at the UCP election night headquarters. (Photo by Jimmy Jeong/Maclean's)

Albertans have put faith in Jason Kenney as their economic saviour, giving his United Conservative Party a comfortable majority government and ending the oil-producing province’s brief flirtation with NDP government.

The UCP was leading in 63 of the province’s 87 ridings on Tuesday, with winners in all but four constituencies called, while the NDP was leading in 24. Kenney’s party swept most of the map and dominated Calgary.

Kenney has essentially promised a conservative counter-revolution to repeal various NDP-instituted regulations and taxes, most notably the carbon tax and corporate tax increases. After a bruising stretch of economic doldrums during Rachel Notley’s tenure as premier, Kenney’s party played heavily on Albertans’ nostalgia for boom times—one of his key party catchphrases was “renewing the Alberta advantage,” which hearkened to the 1990s heyday of former premier Ralph Klein.

The UCP went with a simpler slogan in the homestretch—“getting Albertans to work”—which resonated in a province with 6.9-per-cent unemployment, the highest in Canada outside chronically struggling Atlantic Canada, which had been sending thousands of young labourers to Alberta’s oilfields before the sector hit the skids around the time Notley took the premier’s office.

Kenney played up unabashed Alberta pride and stereotypes, with a live country music band at his campaign-night party on Calgary Stampede grounds. And for his victory speech, he rolled up to the stage in the blue Dodge Ram pickup truck that had served as his campaign vehicle.

In his victory speech, Kenney spoke of small business owners barely hanging on, young people unable to put post-secondary degrees to work, and a woman in Medicine Hat who told the UCP leader, tearfully, that her husband had to find work in Ontario and she wanted him back in Alberta.

“To them, we send this message: Help is on the way, and hope is on the horizon,” Kenney said to hundreds of supporters. He promised a government that will be “obsessed” with trying to create “tens of thousands” of jobs through corporate tax cuts and severe cuts to regulations in areas like environmental and labour standards.

Before Tuesday, no government in Alberta history had been ousted after one term; in 2015, the NDP ended 44 straight years of Progressive Conservative power. But the recession and sharp decline in oil prices made a ghastly welcoming gift for Rachel Notley’s rookie team, and her tax increases and deficit budgets weren’t popular in a province where Klein famously declared the fiscal debt eliminated last decade.

Notley’s party held on to most seats in Edmonton, but was on track to win only three seats in Calgary (from 15 last time). Her party was clinging to narrow leads in only two other ridings outside the major cities.

In her concession speech, Notley pledged to stay on as opposition leader, breaking with the trend of recently elected premiers in Ontario, B.C. and Quebec stepping down after they lost power. But she remains the most popular element of her party, and deafening screams from her Edmonton supporters Tuesday underlined that. “I will make sure that our vision of Alberta endures, through a vigorous and robust opposition holding government to account and making sure the voices of all Albertans are heard in their legislature,” Notley said.

She hailed her government’s accomplishments, such as halving child poverty, building schools, and introducing a tough climate-change regime. When folks watching at UCP headquarters heard her boast that “our kids are breathing cleaner air,” they replied with cynical boos.

After a polarizing election, such partisan hostility cut both ways. When Notley said she called to congratulate the premier-designate, a woman yelled out: “Kenney’s a bigot!”

Over the course of her government’s four years, Notley became a stauncher advocate for new pipelines that would ease Alberta’s oil supply bottlenecks. But those projects were consistently thwarted by legal rulings, regulatory hurdles and what Albertans increasingly believed was indifference—or something more sinister—from Prime Minister Justin Trudeau. Throughout the campaign, Kenney excoriated Notley for working cooperatively with the Trudeau government on climate policy, or at least for not consistently lashing out at environmental assessment legislation and a proposed oil tanker ban on B.C.’s North Coast that energy companies opposed. The UCP promised to end the provincial end of what they called the “Notley-Trudeau alliance,” and then steadily attack the other end.

Kenney, a former federal cabinet minister under Stephen Harper, has pledged to confront the Trudeau government in various fronts, challenging the federal carbon tax in court, claiming the environmental assessment bill violates Alberta’s jurisdiction, and declaring that if there’s no progress on the Trans Mountain pipeline his province will hold a referendum to remove the equalization program from Canada’s constitution. Kenney, 50, was unbowed by repeated warnings that last move would have zero bearing on an equalization system that solely uses federal tax incomes. And he rightly calculated that Albertans’ thirst for revenge would trump their doubt about what is possible. Many feel their wealthy province doesn’t get back from Confederation what it puts in; they want some kind of fairer deal.

Kenney offered an aggressive warning in his speech to environmental groups and activists who receive foreign charitable donations: “Your days of pushing around Albertans with impunity just ended.” But he also offered two lengthy conciliatory statements: one to Indigenous communities, offering investment support if they want to help break the cycle of on-reserve poverty; and another to Quebec, spoken mostly in French, urging the two provinces to be national partners, saying Quebec could help his struggling province by welcoming a pipeline of Alberta oil instead of buying from the United States or overseas dictatorships. In both cases, his goodwill relied mainly on the recipient embracing Alberta fossil fuel projects.

Kenney was a leader of the Canadian Taxpayer Federation before he became a 29-year-old Reform Party MP in 1997. A tireless organizer, policy nerd and effective communicator, he became a respected lieutenant for party leaders Preston Manning, Stockwell Day and then Stephen Harper. Kenney, the Saskatchewan-raised son of a boarding school headmaster, served in Harper’s cabinet, most notably as Immigration Minister, spending much of his time criss-crossing the country to woo religious and ethnic minority communities into the Conservative fold. To many in the federal party, he was a key architect of the party’s 2011 majority, before Tory policies like a ban on Muslim niqabs at citizenship ceremonies become a polarizing turn-off in 2015.

After his government’s defeat, Kenney decided to return to Alberta, which he’d represented federally for two decades though he spent little time there. Known generally in Ottawa as an erudite, Guinness-sipping nerd, Kenney had a makeover of sorts to curry favour in traditionally conservative, blue-collar Alberta—he traversed the province in a Blue Dodge pickup truck, and became fond of saying “get ‘er done.” Notley was the one who actually grew up in rural Alberta—her dad, Grant Notley, was a longtime Alberta NDP leader himself. Yet Kenney seemed to fare better at seducing voters in the countryside. He handily won leadership of the Progressive Conservatives in 2017, then merged them with the Wildrose Party to prevent the sort of right-wing vote splits that helped elevate the NDP in the last election.

Kenney then won the crown of the new United Conservative Party. But some of his tactics caused him political grief in this spring’s general election.

Documents exposed on the eve of the campaign revealed that Kenney’s team helped run a sham rival candidate in the UCP contest, Jeff Callaway, who was mainly focused on criticizing fellow candidate Brian Jean so Kenney didn’t have to do that dirty work. Alberta’s elections commissioner has laid more than $35,000 in fines in the matter, and both that body and the RCMP are investigating. Separately, the RCMP have been investigating allegations of identity fraud in the leadership election’s digital voting process: police last week obtained a search warrant and seized computer equipment from the business of a UCP candidate in Calgary. His lawyer confirmed on election day that the raid was tied to the fraud investigation.

On the campaign trail, Notley warned against electing a premier whose team is facing RCMP investigations and other legal issues. She also highlighted the problems Kenney had with hatefulness and intolerance within his party’s ranks—the UCP had to jettison two candidates exposed as having made comments that were racist, transphobic, or seemingly sympathetic with white supremacy. However, Kenney refused to turf his party’s education critic Mark Smith after a sermon came to light in which he associated homosexual love with pedophilia and child murder. The UCP leader also stirred fear and anger within the LGBTQ community with his plan to roll back some of the NDP’s protections for school gay-straight alliances, and Kenney’s own past as an activist against gay rights was a further focus of NDP scorn.

The steady attacks on social and cultural issues seem to slightly erode UCP’s lead in the polls from earlier in the campaign. But it also led to public criticism of Notley’s steadily negative tone and, for most Albertans, those controversies were lesser concerns than the economy, jobs and pipelines.

Those were the three words in block letters on Jason Kenney’s lectern at several campaign stops: ECONOMY, JOBS, PIPELINES. Though the first two rely on dynamics largely beyond the control of any government, and the third is wholly in the decision-making purview of Ottawa, Albertans are expecting their new premier to deliver on all fronts.

—with files from Tim Querengesser in Edmonton