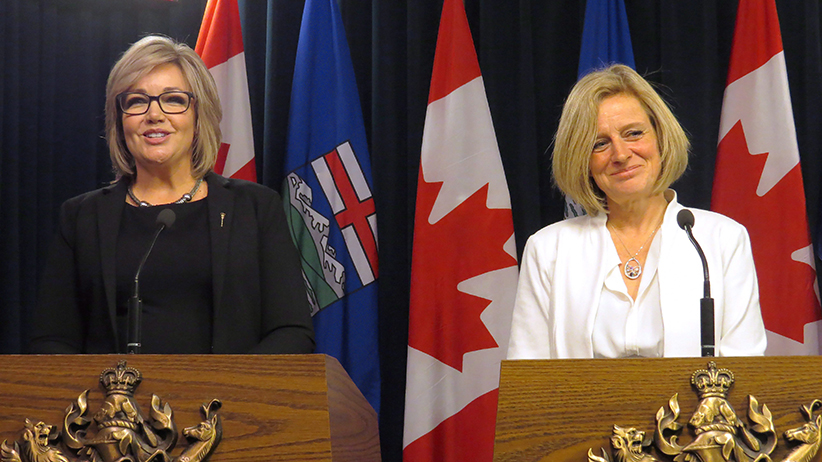 Sandra Jansen, left, and Premier Rachel Notley announce jointly that Jansen is crossing the floor from the Progressive Conservatives to join Notley’s NDP at the legislature in Edmonton on Thursday, November 17, 2016. (Dean Bennett/CP)

It was lousy timing, primarily, that the Alberta Tory leadership contest suffered two high-profile departures on the same day Americans elected Donald Trump. One of those has gotten most of the oxygen and stoked Trumpism-in-Alberta chatter: Sandra Jansen, a former broadcaster and unabashedly progressive Tory MLA, had felt bullied and harassed out of the race. A week later, she crossed to the NDP caucus, saying Rachel Notley and colleagues reached out to her in sympathy and solidarity, and fellow Tories didn’t.

Nov. 8’s other leadership race quitter also happened to be a centrist woman from Calgary, but Donna Kennedy-Glans has strived to distance herself from Jansen’s experience. Kennedy-Glans, a former legislator and oil company vice-president, wasn’t left reeling from misogynistic attacks. She has zero interest in linking arms with Notley. Her decision is vastly more common among veteran Tory moderates: disillusioned and aware that Jason Kenney is crushing his way to control the Progressive Conservative party and marry it to the Wildrose opposition, Kennedy-Glans and her centrist ilk will camp out on the sidelines for now, and watch how Alberta politics reorganizes on either side of them.

Jason Kenney announces he will be seeking the leadership of Alberta’s Progressive Conservative party in Calgary, Alta. on July 6, 2016. (Jeff McIntosh/CP)

The remnant core of the once-mighty Alberta PCs—punted from four decades of rule last year by a weary voting public—seemed ready to fight the hostile takeover plan Kenney launched in July. They would choose their leader by a delegate system, with rules set up to apparently favour an establishment figure over somebody who wanted to dissolve the party. Then, a couple of things went Kenney’s way: opposing candidates waited until late September to go public, giving the former federal Conservative minister miles of runway to mount a province-wide pickup-truck tour. It’s easier to lock down delegates when nobody’s actually competing for them, Kenney found. He also stunned the ranking Tory moderates by finding that many party elders and former MLAs (leadership delegates, all) reject the idea that Tories should refashion themselves as a principled centrist party. With former prime minister Stephen Harper as a top booster, Kenney is luring party elders and the grassroots with the traditional Tory promise: a swift campaign march toward power, delicious power.

Related: Jason Kenney on life after Ottawa and uniting the right in Alberta

Kenney has so far seized control of the PC policy agenda—no to any carbon tax, “not necessarily” to gay-straight alliances in schools—and is dominating the early delegate selection meetings against three low-profile rivals. His campaign was fined $5,000 for rule-flouting at one riding event, but is treating that like a fly splatting its truck windshield. Barring the sudden shifts that are jarringly common in Alberta politics, Kenney will win the PC crown in March, then try to draw Brian Jean’s Wildrose party into a merger, likely with that same intoxicating lure of power. An Innovative Research poll from late October shows the NDP way behind the Tories and Wildrose, and a majority of both party’s supporters believe unity is the path to victory.

Thus far, Notley and Kenney seem to relish the creation of an NDP-Conservative binary in Alberta politics. But to listen to each of them, the centre isn’t a void. It’s the sensible free-enterprisers versus the socialist hordes from one perspective, and the mainstream moderates versus the Trump-ish extremist from the other. In Jansen, Notley picked up a politician with nearly identical views on social issues, and both remember how the stench of homophobia doomed the Wildrose in the 2012 election that Alison Redford’s progressive Tories won.

Kenney risks leading his party or parties to defeat if he mucks too much with social conservatism, abandoning a key lesson from Harper. But perhaps duping the NDP into fighting a culture war may be wise. The Tories whose “fiscally conservative and socially progressive” cliché emphasizes the latter point are a stark minority—few will follow Jansen’s example. More Tories focus on fiscal principles, like Kennedy-Glans does.

There are two dominant political dynamics in Alberta: economic anxiety, and the desire to remedy the dice-roll that gave the province an NDP government. Kennedy-Glans launched her short-lived campaign hoping to focus on ideas. She had to reposition quickly to talk about winning. “That was the topic, that was the question: who can beat the NDP in 2019,” she says. Kenney wins the backlash sweepstakes if he becomes the easiest answer to that question, and if he can keep Albertans cozy in the traditional embrace of against-all-taxes dogma.

At least Notley’s team stands to fare better than their cousins did in Ontario in the 1990s and Nova Scotia more recently. When those provinces’ voters appraised their first-time NDP governments after one term, they pushed them back into third place. In Alberta, it would be hard to finish third in a two-way race.