The Alberta premier delivers his much-coveted endorsement, leaving little doubt that he's no fan of the early frontrunner 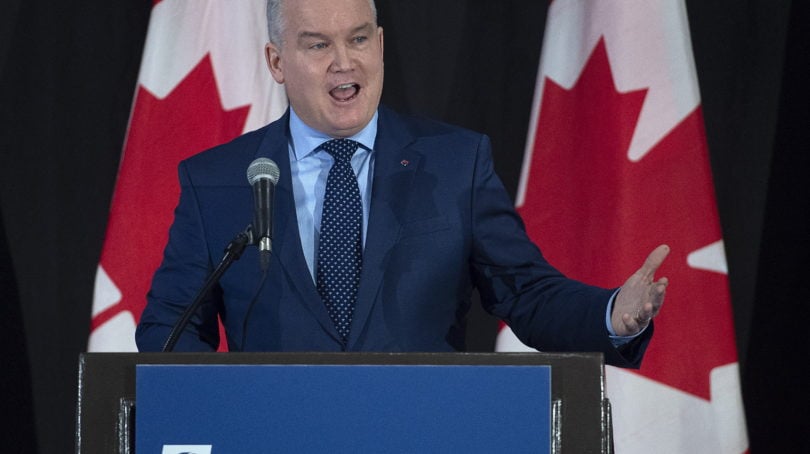 Up until the point in 2016 when Jason Kenney announced his return to Alberta to challenge for the premier’s job, it seemed inevitable to many conservatives—himself included—that he’d vie to replace Stephen Harper as federal Conservative leader. As he campaigned to unite the right across Alberta, Kenney chose to stay officially neutral in the federal party contest. But he’s remained deeply invested in the affairs of his old national team, hopeful it doesn’t spin too far from his own orbit. Rumours abound that Stephen Harper’s best community organizer was quietly working the phones and networking lists to boost Andrew Scheer, the most viable social conservative in the race.

In 2020, Kenney decided that privately marshalling his forces to pursue the outcome he desired wouldn’t cut it. With more than three and a-half months to go before Conservatives vote for a leader, the Alberta premier announced his endorsement of Erin O’Toole, in hopes of heading off an apparent coronation of Peter MacKay.

Two questions arise: why did Kenney do this, and what does it bring to what was shaping up to be a sleepy leadership race? I’ll posit some responses to each as best I can here, but the unifying answer is this: Kenney will do what he can to make sure his beloved Conservative Party of Canada isn’t controlled by Peter MacKay.

RELATED: Ten things that would guarantee the new CPC leader is a winner

This endorsement would, on its surface, reopen the old rifts between the Reform/Canadian Alliance faction and the Progressive Conservatives, from which Kenney and MacKay respectively entered the merged CPC family in 2003. But while it’s less well known, O’Toole is also an old PC—he told Maclean’s last week that, in that party’s final leadership race (which MacKay won), he endorsed Scott Brison, who months later leapt to the Liberal caucus rather than linking arms with the Alliance-y likes of Jason Kenney. Still, despite their common roots and politics, O’Toole is tacking right of the MacKay in this race, disparaging the frontrunner as “Liberal lite.” Kenney echoes that in a letter he sent Thursday to Conservatives, calling O’Toole a “true blue” candidate “who won’t run away from conservative principles under pressure from the media or the Left.”

It surely doesn’t hurt either that O’Toole and Kenney have emerged with the same tough-on-protest policy to thwart rail blockades and other activist disruptions by declaring various corridors and facilities to be “essential infrastructure.” (This might be a symptom of their alliance, not a cause; the lines may blur.)

There seems, however, to be a deeper animosity between MacKay and Kenney, one that mystifies even some senior Conservatives that I speak with. He’d rather go with O’Toole, a guy who was in cabinet as veterans affair minister for a few months rather than a nine-year stalwart in Justice, Foreign Affairs and Defence. Kenney is willing to publicly sideswipe the federal contest’s frontrunner, to kneecap him during the same week MacKay has boasted that he’s already raised $1 million, a sum that added to MacKay’s aura of invincibility. If MacKay wins, he will doubtless remember this deepening of their antagonism, and if there’s any place whose fortunes could rise and fall with the level of support a federal leader gives them, it’s the petro-province in the Conservatives’ heartland.

MacKay seems to have inflamed their tensions already with his remark last fall that Scheer’s social conservatism hung around the party’s neck like a “stinking albatross.” Kenney, once an ardent anti-abortion activist and stalwart of the Christian right, has over time become comfortable in a coalition with pro-choice moderates like MacKay, and surely by now has accepted they might have become a dominant part of his party. In his endorsement letter, Kenney attacked MacKay’s seeming cold shoulder to the social conservative flank of the party. “Every conservative would be welcome in a party led by Erin,” Kenney writes. “No one will have their deeply-held beliefs dismissed as ‘stinking albatrosses’ under Erin O’Toole’s leadership.”

As for what Kenney’s endorsement brings to O’Toole: a whole lot. The only supporter more coveted in this contest would be Harper, though the signal of Rona Ambrose’s support may nab a strong third place. Kenney’s nod will have substantial sway among Albertans and sympathetic westerners, although in a race where each riding is weighted equally, racking up the votes in oil country isn’t of massive value. But across the country, Kenney can also bring along social conservatives by the church busload; plus, he retains great support networks among immigrant communities that he cultivated in the suburbs surrounding Toronto, Montreal and Vancouver. Erin O’Toole surely benefits from this trifecta of Kenney camps, if they can be all motivated to join him and abandon MacKay, who had already been snaring endorsements from several Alberta MPs, former candidates and politicians from the 905 and other suburban regions.

There’s also a flip side to Kenney’s endorsement that might help MacKay in certain corners. There are a whole bunch of subscribers to MacKay’s “stinking albatross” theory in Quebec and Ontario, who may now perceive O’Toole as the more so-con-friendly candidate, even if his personal views aren’t so different from MacKay’s. The Conservatives who believe that the party needs a clearer and more credible approach on climate change may also hew closer now to MacKay and away from the sudden favoured son of Alberta’s oilpatch.

Can this one endorsement blunt the huge head start MacKay got in terms of money and other backers? Elections sort out such matters. Either way, the result will reveal how much sway Kenney has across the country, after a few years of being an Alberta-firster.