Jason Kenney, his ministers and a couple bottles of red

Image of the Week: When Albertans hear about 'the cabinet table,' this probably isn't what they have in mind 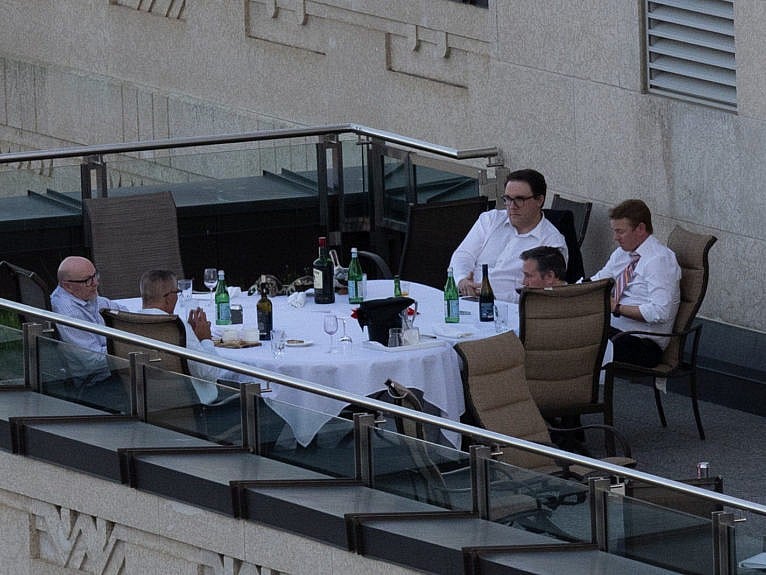 It’s one thing for a political leader to violate COVID safety restrictions. Donald Trump did it all the time. But it’s quite another to break the rules and pretend that you’re not. As the premier of traditionally conservative Alberta, Jason Kenney has tried to balance small-government inclinations with big-government action, eventually striking an awkward middle ground. Polling suggests his approach is not working. And just this week, an unidentified photographer captured a scene of him and several high-ranking cabinet ministers surreptitiously ignoring advice from their own health officials, dining on an Edmonton patio over what appear to be bottles of Jameson whiskey, red wine and San Pellegrino. Kenney’s office defended the scene, which first appeared on the Twitter feed of the Breakdown, a web series focused on Alberta politics. A premier’s aide insisted that he did not, in fact, violate any regulations. Yet the rules clearly require that anyone from different households dining together outside must remain at least two metres of distance, which his group evidently did not. One response could have been to apologize; another would be to play the Trump card and call health guidance ineffective. Instead, Kenney’s camp chose arguably the worst option: gaslight the public and hope for the best. In a province that decries elitism, white-collar rule-breaking around bottles of pinot and fizzy water is not a good look.