Alberta voters embraced the UCP's constant battle posture, but they may soon find it exhausting—and counterproductive 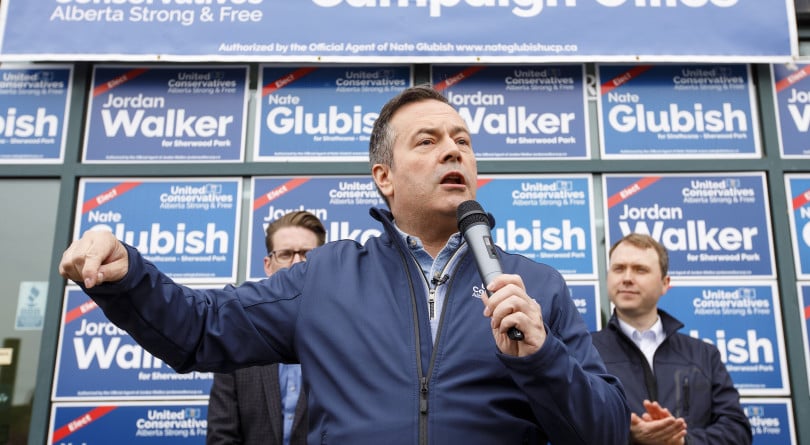 Kenney at a rally in Sherwood Park, Alta., before the election (Jason Franson/CP)

Jason Kenney just completed a three-year series of gruelling slugfests to reach this point. He seized the crown of the once-mighty Alberta Progressive Conservatives, fused them with their old Wildrose Party foes, kamikazed his way to leadership of the new United Conservative Party, rejected several would-be UCP candidates with bigoted or intolerant views (but tolerated a few), and dispatched with the NDP on Tuesday night to claim the premier’s office for himself and his cherished Sir Thomas More portrait.

After all that, what did Kenney win, with his majority UCP government? A chance to fulfil his promises for four more years of endless pugilism in the name of Alberta, and of getting more of its residents back to work.

He’ll fight provinces like B.C. and Quebec, who are unwilling to welcome bitumen pipelines. He’ll fight environmentalists in courts of law and public opinion with an “energy war room.” He’ll fight international banks who don’t want the reputational harm of financing pipelines or oil sands projects. He’ll fight city councils mulling lawsuits against oil companies to recoup the costs of climate change. And, hold on to your socks, he’ll fight Justin Trudeau and the federal Liberals, who ended Kenney’s cabinet career and set him on his current provincial trajectory.

Are Albertans game for a premier who balls his fists for the next couple of years? You’re damn right they are, after richly rewarding his campaign fueled on anger, revenge and the expectation all this and some actual government policy will bring back the economic boom times to which Alberta had grown accustomed. Kenney snidely promised to make Vancouver “carbon free by 2020,” instead of 2040, by turning off the oil taps that anti-pipeline B.C. depends upon for its fuel supply. The threat earned lusty whoops at UCP rallies. And his pledge to hold a provincial referendum if there’s no progress on pipelines to remove equalization from the constitution—a move he claims would force Ottawa to renegotiate a fairer deal with Alberta—made zero sense to most folks who understand how federalism and law works. Yet his partisans heard only the exciting key words: “pipeline… referendum… equalization… force Ottawa.” It just sounded so much like winning, after so many economic losses during the last four years of NDP rule.

RELATED: Are we really okay with Jason Kenney?

Kenney is also spoiling for some fights within the province, particularly with unions resisting deficit reduction or rollbacks to labour standards to pre-NDP days. He could have broad support for some of that, as Ralph Klein did a quarter-century ago when debt and deficit were last provincial obsessions. And sagging business confidence is likely to shoot back up with the UCP in charge—not just because there’s a party promising to scrap corporate taxes, hack away regulations, and bring in a $2 discount to the youth minimum wage, but by sheer dint of the New Democrats leaving office in favour of a guy flogging hope in an aerosol can marked Conservative.

But Kenney’s multi-front war for pipelines risks getting away from him.  Notley predicted last week, that the Trudeau Liberals are on the verge of approving the Trans Mountain pipeline in the name of supporting Canadian jobs, but Ottawa could find any number of reasons to withhold the permit—especially Kenney’s vow to fight the carbon tax—just to make life difficult for him and the UCP. It’s a risky gambit, given the volatile mood within the province. Kenney previewed his retort when asked on Global News Radio Calgary last week about such speculation: Is what they’re saying that “the federal Liberals bought Trans Mountain at our expense in order to play blackmail with Albertans on a carbon tax?” he asked radio host Danielle Smith.

It’s not clear how that fight would go, but Kenney shows no inclination to de-escalate —he openly mocked Notley for trying to collaborate with Trudeau, whom Kenney last year said has the “political depth of a finger bowl.” (He later apologized for sharing that out loud.) Other causes also stand to suffer from the constant provocation Kenney has promised.

In 2012, Joe Oliver was Stephen Harper’s natural resources minister, and he declared a—stop me if you’ve heard this more recently—campaign against foreign-funded “environmental and other radical groups” who seek to “kill good projects in service of a “radical political agenda.” This mission backfired, provoking a rush of domestic backing for those supposed foreign-funded causes: British Columbians came to strongly oppose the Northern Gateway pipeline due; the Harper government throttled back its rhetoric, writes colleague Paul Wells in The Longer I’m Prime Minister, a book on Harper. A senior Harper advisor later told Wells the attack on environmentalists “was unwise because it shows that we’re vindictive towards our political opponents—we have a sort of take-no-prisoners approach.” That’s, roughly speaking, the approach Kenney campaigned on.

Some B.C. environmental groups recall the fight against Harper and Joe Oliver as a banner era for fundraising and enlisting support. It’s harder to rally the masses against a Liberal PM and a neighbouring NDP premier; an arch-conservative character like Kenney practically writes the environmental advocates’ fundraising letters for them, with his bids to muzzle their advocacy and bring down the might of the Goliath petro-state against these tree-hugging Davids. Kenney, for his part, depicts Alberta as an underdog pitted against the Rockefeller family foundation, and David Suzuki: “Your days of pushing around Albertans with impunity just ended,” Kenney said in his victory speech. “We Albertans are patient and fair minded, but we have had enough of your campaign of defamation and double standards.”

Meanwhile, B.C. Premier John Horgan’s fight against Trans Mountain thus far has run counter to his own province’s majority sentiment in favour of the pipeline. But that could change, if Kenney dismantles some of the climate protections around the oil sands and establishes himself as a nemesis threatening to create a fuel-supply crisis as political leverage. Horgan certainly didn’t ever act in Notley’s best interests, but he avoided bad-mouthing his fellow New Democrat. He’ll have no such hesitation against an anti-green Kenney, and Horgan’s UCP-thumping will have many cheerleaders in the B.C. Lower Mainland. Horgan, like Trudeau, released a statement expressing hope he can work with Kenney in the neighbouring provinces’ common interests. That’s night-of deference to the victorious leader. It’s what comes in days after that will matter.

Kenney’s victory speech—part hope for the unemployed and part fury at the uncool-with-bitumen— diverted twice to offer olive branches to Indigenous communities and Quebec, two populations with liberal elements of pipeline opposition. He expressed a desire to partner with both—if, that is, they’re keen on developing oil and accepting pipelines.

Even oil executives can expect some chin music from a Kenney-led government. Many major players like Husky and Suncor prefer a carbon tax and serious long-term environmental policies, and it’s unclear Kenney has much sympathy for them. “I don’t think energy execs are very good at playing politics—they’re technical people, engineers, geologists, and finance people, and they’ve tended to get all of this wrong,” he told me 17 months ago, a preview of similar digs to come. Some industry leaders have hailed Kenney’s get-tough approach against environmental critics—Alex Pourbaix, CEO of oil sands giant Cenovus, said in February it’s time everyone “get out there and defend this industry.”

But others would rather the government do that fighting on their behalf, leaving their corporate hands clean and distancing them from bygone stereotypes of Big Oil bosses indifferent to the perils of climate change. Kenney, however, has said he’ll demand corporations fight alongside him, as his reimagination of what “social licence” means—if you want to drill, the opposition you must help kill.

RELATED: What Alberta voters should know about Jason Kenney and the UCP

In that radio interview, Kenney reminded listeners of a Toronto city council proposal to study suing oil companies for causing climate change. Councillors shelved the idea during the Alberta campaign, which allowed Kenney to proclaim his open letter to the mayor and lobbying efforts slayed the threat. He chided Notley as silent on the matter.

“Quite frankly as far as I can tell, the energy companies were, too,” he went on, signalling that he expects every fight, big and small, to be a team brawl, with fists from Alberta’s public and private sectors. “We will not let this stuff slide anymore,” Kenney said. “We have been too passive, too defensive, too apologetic.”

If the war fronts are everywhere, this could be an exhausting four years. By identifying an endless stream of perceived enemies to his province’s economic interests, and making Albertans feel threatened by the gathering forces, he might well rally them around him. In the process, he risks making it easier for those on the other side to do exactly the same thing.