By the end of the premiers' conference, his coalition of the 'frustrated and alienated' looked surprisingly shallow 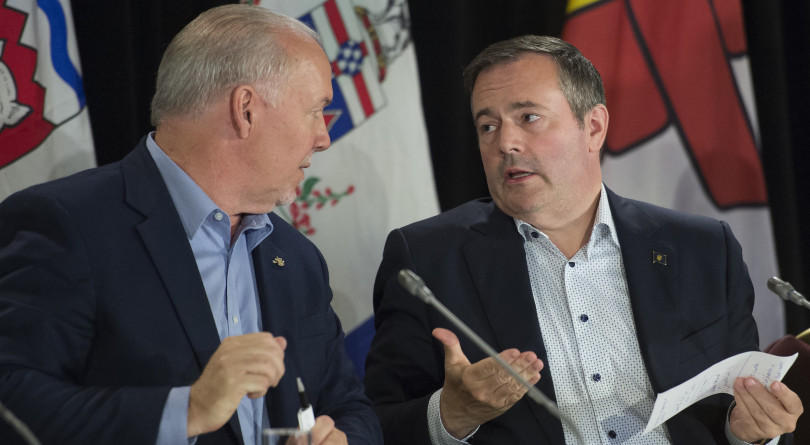 Premiers’ conferences all start to look the same after you’ve followed enough of them, whether in St. Andrews by-the-sea, N.B., or in Saskatoon. Some nice group photo near some tree and some other geography-specific backdrop, be it rocks or water. Navy blazers, no neckties. A row of flags offering more colour than the politicians seated before them at the closing news conference. Exquisitely beige communiqués about premiers steadfastly committed to action—some day!—and information-gathering.

For roundtable rookie Jason Kenney, it wouldn’t quite do that the scene-setting would unfold in Saskatchewan. In 2016, he opted to forgo the run for national party leadership that used to seem inevitable, even to him, in favour of provincial politics. At some level, Kenney must have been longing for the big chair when he gathered four other premiers in Calgary for his own kickoff. He treated leaders of Ontario, Saskatchewan, New Brunswick and Northwest Territories to a classic Stampede good time—a flapjack-flipping breakfast, new cowboy hats, a steak dinner and a private hootenanny hosted by a lobbying firm.

“This was just a brief and fairly informal get-together of some like-minded premiers to talk about jobs, growth and prosperity,” Kenney told a not-hastily organized news conference, as government aides listened intently while wearing fairly informal special photo lanyards for the “Stampede Premiers’ Meeting.”

Kenney declared the group’s shared commitment to nation-spanning “economic corridors” with pipelines; concerns about federal environmental assessments; and their distaste for the federal carbon tax. In addition to the conservative premiers gathered with him (and a pro-resource but non-partisan NWT leader), he’d invited the Progressive Conservative heads of Prince Edward Island and Manitoba, but they limited their weekly schedule to one provincial summit. Kenney insisted it wasn’t an anti-Trudeau ideological cadre—no resistance here, nope. “This is not about parties. This is about prosperity.”

It was, of course, about setting the table before the other premiers gathered around it at their annual conference in Saskatoon. Kenney had done unusually intensive advance work for this event, not even three months on the job and having already visited fellow premiers for one-on-ones in Regina, Toronto, Quebec City, Fredericton and Charlottetown.

But premiers’ conferences are almost always the place bold ideas go to drown. Even before this week’s actual summit, conservative premiers had watered down the rhetoric of federal counterpart Andrew Scheer, who had kickstarted this latest round of discussion about “energy corridors.” Saskatchewan Premier Scott Moe and Kenney swapped out the term “energy” for “economic,” in hopes of winning more buy-in. Their petro-provinces make the corridor pitch as follows: here’s a way for us to transport our crude, and for hydroelectricity-producing provinces to ship their electrons.

After the closed-door jostling, Quebec and British Columbia joined their provincial colleagues to declare they really liked the latter half of that bargain, and are also fine with liquefied natural gas. Quebec Premier François Legault continues to wield his line that there’s “no social acceptability” for new oil pipelines through Quebec, and all of Kenney’s efforts at statecraft and cowboy diplomacy won’t change the fact that John Horgan runs a B.C. New Democrat government propped up by the Greens. But at least, at the end, everyone’s talking and asking about Alberta’s pet issues, ri-ight?

The closing news conference’s last question, from Stephanie Taylor of Canadian Press, invited all premiers to weigh in on whether they perceived a national unity crisis, which Kenney and Moe have said is brewing because of parts of the Trudeau government’s environmental agenda. One by one, the premiers stated how unified they felt despite their relatively few differences. Moe demurred, saying he wanted not to take up time, while New Brunswick’s Blaine Higgs warned broadly about not letting problems linger. This left Jason Kenney to discuss the “level of frustration and alienation” in his province, and note wealthy Alberta’s contributions to federal revenues—while saying he doesn’t believe Albertans actually want to separate.

Though he’s collected several partisan allies among the premiers, across most of Canada’s time zones, this new alliance may be shallower than Kenney would like. In that moment, alongside the other premiers, Alberta stood off to the side as the aggrieved grump of Confederation.