Jody Wilson-Raybould and Jane Philpott on the power of one

In announcing they are running as Independents, two former cabinet ministers take aim at real change in politics 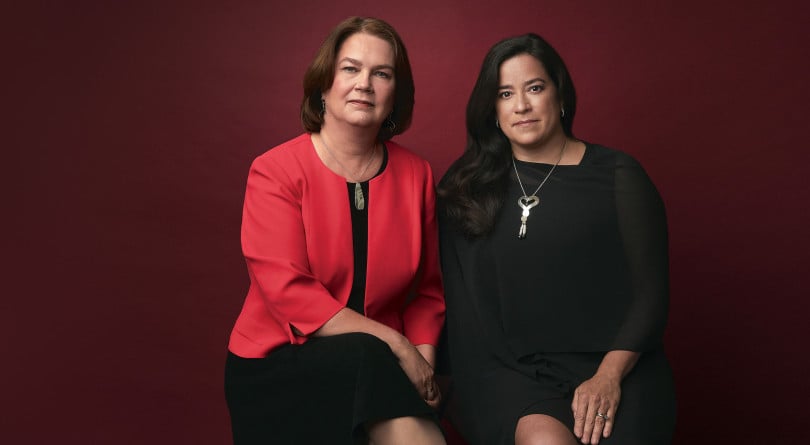 In announcements as carefully choreographed as a Busby Berkeley musical, former Liberal cabinet ministers Jody Wilson-Raybould and Jane Philpott cleaved to the “doing politics differently” mantra that initially drew them to the partisan arena. Wilson-Raybould spoke at Marpole Neighbourhood House in the Vancouver Granville riding at 12 EST on Monday, Philpott at Reesor’s Farm Market in Markham-Stouffville at 12:30 EST. Bringing an end to rabid speculation about which party they’d run for if any in the 2019 election, both said “None.” Instead they announced their plans to run as Independents and an ambitious, idealistic “real change” agenda that took a few subtle knocks at the Liberal’s “Real Change” promise that lured them years ago.

The friends and colleagues were coordinated down to the the hue of their clothing—Philpott in a white suit, Wilson-Raybould in a white shawl. The sartorial detail shouldn’t be ignored. White is the hue of new beginnings, and also famously worn by suffragettes. It matched perfectly with the two MPs’ urgent call for bi-partisan cooperation. “White goes with everything,” Philpott noted, meaning the blue, orange, red, green of the major Canadian political parties. She acknowledged her decision would not be greeted with joy universally: “I know some wanted a different outcome.”

RELATED: Philpott and JWR: How the mighty have not yet fallen

As they spoke, one could imagine the mass Google search for “how many Independents are re-elected federally historically?” The answer: less than one-third of the time, though it’s key to note many of these candidates were expelled from a political caucus for scandal or misbehaviour, not for acting on principle, as was the unprecedented case with Wilson-Raybould and Philpott last April after they vocally opposed  Trudeau’s handling of the SNC-Lavalin file. Notably, no Independent candidate has won election federally since 2008, when Nova Scotia’s Bill Casey and Quebec radio host Andre Arthur won.

But we’re in new territory here. Never have such high-profile candidates, key players in a scandal that rocked the government, chosen to run as Independents. Media coverage is assured. Nor have Independent candidates issued a tandem rallying cry for a collaborative, non-partisan approach to politics, one destined to resonate amid frustration over the toxicity and divisiveness of political discourse.

The pair share a unique history as former political outsiders drawn to a Justin Trudeau-led Liberal Party by the promise of a new approach to governance—more transparency, electoral reform, letting cabinet ministers run their own portfolios free from prime ministerial interference. They literally fronted promised change: Philpott, a medical doctor with a history of community engagement, was appointed Minister of Health; Wilson-Raybould, a former Crown attorney and Regional Chief of the B.C. Assembly of First Nations, was the first Indigenous woman named Minister of Justice and Attorney General.

Wilson-Raybould highlighted her own “unconventional political background”—having never been a member of a political party, as well as her history of work within Indigenous communities using a consensus-based approach. As an Independent candidate, she is “truly free to take the guidance of citizens of Vancouver Granville and truly guide you,” she told the crowd to cheers. She also spoke with urgency of economic, environment and security challenges at a moment of evolving democracy that called for greater transparency. “Canada is one of the best if not the best countries to live but we can not take it for granted,” she said.

READ: Why did Jody Wilson-Raybould have to go? Because: white nationalists.

Both uttered similar supportive shout-outs to Elizabeth May, the Green Party of Canada leader who had extended invitations to both to join the party. Wilson-Raybould seriously considered the offer, she said, noting she’d also talked with NDP leader Jagmeet Singh before calling May and the Greens “necessary allies.” Philpott declared climate change the “existential crisis of our time” and highlighted the Greens’ “outstanding ideas.”

As uplifting and non-partisan as today’s announcements were structured,  it was difficult not to see the subtly directed barbs at the governing party. “I regret that it has come to this,” Wilson-Raybould said. “I do not believe that being a member of a political party means you have to set your principles aside.” She took pride in her accomplishments in cabinet with a caveat, saying: “I wonder what more could have been accomplished if it was a less partisan environment.” Philpott also made a generic comment that seemed aimed at Trudeau: “People want politicians who are authentic,” she said, “and who are accountable, who own up to their mistakes.” She spoke of the need to improve Indigenous rights and for democratic reform, two Liberal promises in 2015. “The system is dysfunctional,” she said. Philpott also exercised her feminist bona fides, noting that her leaving politics after what she experienced would set a terrible example to young girls. Being an Independent MP was liberating, Philpott said; “I didn’t lose my voice.  I found my voice.”

Both Wilson-Raybould and Philpott alluded to the Liberal government as if it were autocratic command central. Wilson-Raybould spoke of the “need to make sure voices of elected representatives are the ones making the policy” and the desire not to be “dictated to vote by non-elected officials.” Philpott spoke with frustration of the influence of “corporate lobbyists.” The comment could shed light on her  tweet  from last week calling out Health Minister Ginette Petitpas Taylor for attending an event convened by think tank Canada 2020 on pharmacare heavily attended by industry; it was “problematic & makes me nervous about government version of pharmacare,” Philpott wrote.

Both women also spoke of conducting intensive consultations with constituents (they didn’t mention whether they’d engaged in polling and media didn’t ask). They also acknowledged the daunting obstacles Independents face. In her plea for financial donations for her campaign, Philpott said the system is “rigged” against Independents; for one, they can’t issue tax receipts for donations until after the writ is dropped in September. In addition to momentous financial challenges, Independents also don’t get other party perks such as automatic questions in the House of Commons or seats on committees.

READ: Jane Philpott: ‘We cannot ever be afraid of the truth’

Still, both implored others to run as Independents. “It doesn’t mean working on your own, it means being committed to working with everyone,” Wilson-Raybould said. Philpott said she heard a number of people say: “None of the parties is exactly me. But I feel I can represent my community’,” and offered an instruction: “Go for it!”

As for future prospects, anyone doing the math using familiar calculus will see Wilson-Raybould’s chance of re-election is far greater than Philpott’s. She was elected in 2015 with almost 44 percent of the popular vote in Vancouver Granville, a redrawn riding; the NDP candidate came in second with 27 per cent of the vote. Philpott prevailed by a far narrower margin in the newly drawn Markham-Stouffville over Conservative Paul Calandra, the incumbent MP in Oak Ridges-Markham district—49 per cent to 43 per cent. Yet she also won respect as one of the Trudeau government’s most competent and trusted ministers. Her expulsion from caucus saw the dismantling of the Liberal riding association in Markham-Stouffville, with its members stepping down in solidarity.

Philpott ended Monday’s announcement with more imagery: “We are going to paint outside the party lines,” she said, referring to her campaign signs, but making a bigger point. She emphasized the power of one person to effect change, quoting the lyrics of Fight Song, after asking the Mennonites present to forgive her for the “fight” reference: “Like a small boat in the ocean sending big waves into motion.”

Tellingly, neither Philpott nor Wilson-Raybould ruled out running for a political party again when fielding reporters’ questions. For now, being Independent, free from politics as usual, delivers the most potent, timely one-two political punch. And that’s the most telling message of all.