Anxious voters keep rewarding incumbents, the Greens hang on and leadership questions weigh on the Liberals 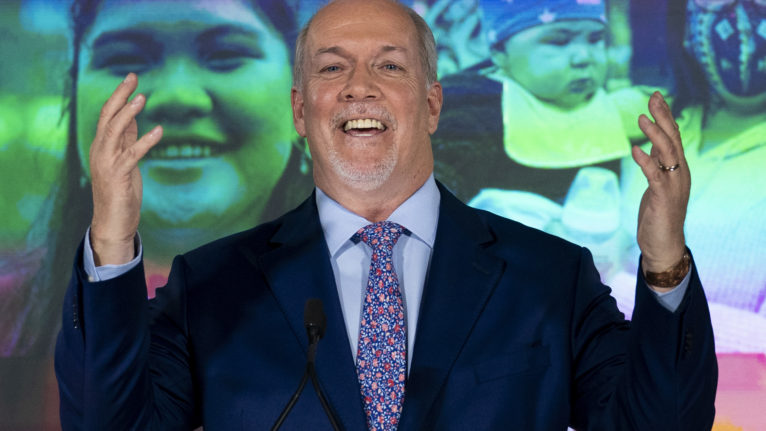 Even as a second wave of COVID-19 cases takes firm hold in the province, the incumbent premier seems to have been spot-on with his calculus that going to the polls a year early would pay off—although no final confirmation will be available for a while because of a glut of mail-in ballots.

After three years of relatively-stable minority government supported by a three-member Green Party caucus, the numbers suggest Horgan will not need to lean on political rivals anymore.

“I want to make sure government works for you each and every day,” the premier said in a carefully modulated address to British Columbians after the voting-day outcome became clear. “That is my passion and that is my calling.

“That is why I get up every morning, and I’m grateful for the returns of the ballots tonight, and the final result that’s yet to come, to give the opportunity to me and my colleagues to continue that work on your behalf.”

What does the NDP victory mean for B.C. and for the rest of the country? While we wait for the full final results to come in—and that will take weeks—we can guess at some of the tea leaves.

The B.C. outcome offers more proof to the notion that voters would rather not shake the boat too much during a pandemic, thank you. Perhaps now is not the time for a sea change. Thanks.

Remember that in September, another premier of another minority government, that one only two years old, ended up with a majority after dropping the writ. That was Progressive Conservative Blaine Higgs, the premier of New Brunswick.

And in Saskatchewan, where the Saskatchewan Party’s Scott Moe inherited a majority government from predecessor Brad Wall two years ago and an election is underway more-or-less on schedule… would you believe that the NDP has any shot at an upset? To put it mildly, polls suggest they don’t. Moe’s first campaign as leader of his party and as incumbent premier is likely to give him another majority mandate when the province votes Oct. 26.

Even if voters are annoyed—or infuriated—by the prospect of voting during a national and international crisis, they don’t seem to be punishing their leaders for it. So, although we grant that federal politics is a different ball game, don’t doubt that Liberals in Ottawa have noticed the trend. It does go some way to explaining why Prime Minister Justin Trudeau was willing to stick his neck out and risk an election last week over the parameters of a committee he didn’t like.

Horgan’s second kick at the can should put to bed any instinct to blame the previous Liberal government for problems he inherited. Whatever happens next, the premier will have to wear it.

In the immediate future, other than the obvious challenges around the pandemic, that will mean taking responsibility for the fate of the controversial Site C hydroelectric dam project in northeast B.C., initiated under Christy Clark’s Liberals.

The NDP government has said the $12-billion project—an amount that keeps rising and could again—is not one it would have pursued. Cancelling it, though, was deemed a bad idea because that would mean writing off $4 billion in sunk costs and letting go of thousands of workers.

But the project’s integrity is very much in doubt. A growing list of problems kept under wraps and downplayed by BC Hydro led the province to announce a detailed review that will wrap up just after the election, in November or December.

Its findings could yet result in a cancellation at the cost of Hydro ratepayers. On the other hand, a cancellation would ease ire from Indigenous right advocates who’ve long decried the dam’s expected ill effects on land use around the Peace River valley.

With Horgan accused of covering up the extent of Site C’s problems, communicating its fate will be his first big test in round two of his premiership. It will no longer matter that he (arguably) didn’t get himself into this mess. It will matter what he does about it.

It was a rough night for Andrew Wilkinson

The current B.C. Liberal leader, who was a cabinet minister under Clark and deeply involved in Liberal governments past, has been criticized for being wishy-washy on his own party’s record. He has also come under fire for inadequately handing candidate snafus—one, who resigned, compared free contraceptives to eugenics; another voted municipally against a rainbow crosswalk; a third tweeted support of a much-criticized J.K. Rowling blog on gender identity.

The Liberals were in power for a full 16 years before Horgan narrowly took power in 2017. Sixteen years in government are bound to haunt any party for some time. But it will be hard for Wilkinson to hang on after defeat—when his compatriots’ instincts will be to look for fresh blood.

On Saturday night, Wilkinson signalled that he would wait for the mail-in ballot count before making that call, but it was clear others in the party have already written him off. “Well, you go the games and you lose the race, you’re getting a new team leader,” Alexa Loo, a former Olympic snowboarder who ran for the Liberals in Richmond South Centre, told Global News. Loo was trailing the NDP candidate her riding by a razor-thin margin after voting-day ballots were counted, and will not know the outcome until the mail-in vote is tallied.

It’s admittedly early for speculation on the leader’s replacement, should he resign or be forced out. But hey, why not? Keep an eye on Michael Lee, who is likely to retain his suburban Vancouver seat. He ran against Wilkinson in 2018 and came in third; on CBC Saturday night, he coyly avoided letting on whether he might be interested in running again. And maybe watch for a couple of guys from Kamloops, who also appear en route to re-election.

Todd Stone, MLA since 2013, came in fourth in 2018. He has charisma in spades but will be hamstrung by his record on the beleaguered Insurance Corporation of B.C. MLA Peter Milobar, elected in 2017, is a former mayor of Kamloops and the party’s labour critic at a time when the party badly needs to re-establish itself with blue-collar workers.

The Green Party hangs on

This election was always going to be tough going for the B.C. Greens. For one thing, they recently elected a new leader. Super recently. A week before Horgan called the election. Sonia Furstenau, one of the party’s three MLAs going into the election, not only had to run a campaign a few days into her new job, but had to introduce herself to voters.

Then, in a strange turn of events a couple of days before the election, ex-Green leader Andrew Weaver seemed to lend his support to John Horgan by appearing in a series of videos the premier has been posting featuring phone calls with supporters. Yikes!

As of late Saturday night, it appeared that the Greens were going to hang on to three seats; they were competitive in several more ridings. The party will be happy—and will get a hat tip from the Greens’ new federal leader, who is fighting in her own federal by-election—if it picks up a seat or two on top of that.

But no matter how the numbers shake out, this election represents a loss of power. If the NDP no longer needs to rely on Greens for control of the legislature, Furstenau will be hard-pressed to ensure her party’s influence doesn’t wane.

Election officials were warning on Friday that it could take days or even weeks for a final election result to become available.

It’s not surprising that B.C. voters turned in earnest to mail-in ballots at a time when they’re being encouraged to stay home and stall the spread of COVID-19. Still, it’s stunning to see officials reporting that nearly half a million ballots were received by mail, another 681,000 casted at advance polls. Together, those numbers represent well over half of total voter turnout in the 2017 election. Far fewer people than usual were expected to vote in person Saturday.

While we can reasonably predict that election day results will be shored up by those ballots as they’re counted, and that the major broadcasters were calling an NDP majority just over an hour after results began to pour in, consider this blurb our caveat that we just can’t be 100 per cent sure.

Depending on how long Canadians will have to deal with pandemic restrictions, this seems another dress rehearsal for how elections could play out for the foreseeable future.

This post was updated to include quotes and details