John Kelly and the crushing irony of Donald Trump

One photo, less than 1,000 words: What part of Donald Trump's speech made his chief-of-staff John Kelly facepalm? 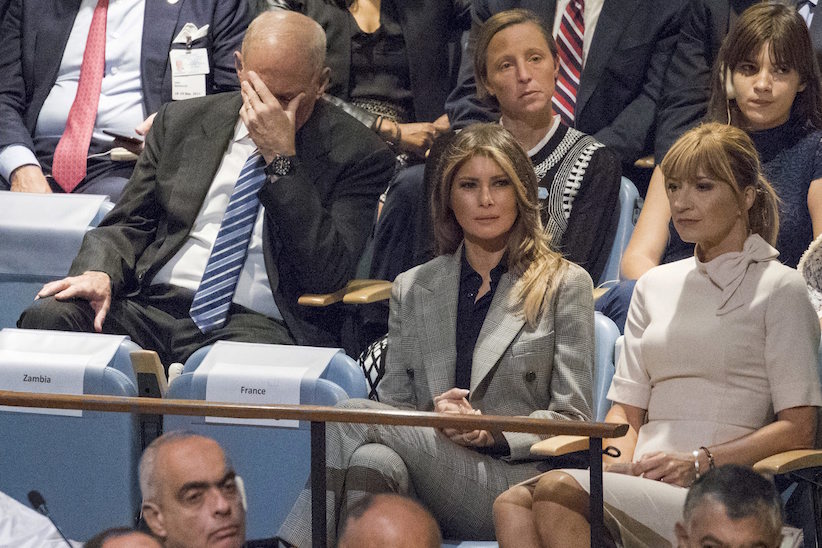 When John Kelly replaced Reince Priebus as President Donald Trump’s chief of staff, the dust was only just settling from the f-bombs Anthony Scaramucci—Trump’s momentary press secretary—launched in an interview with the New Yorker. The idea at the time was to bring someone in to manage a White House bloated with damaging information, and cracking and spilling its secrets everywhere. But it quickly became apparent that Trump’s demand for discipline didn’t apply to him.

Then came Charlottesville, and Donald Trump’s equivocating in his answers to the easiest of political questions—that is: are you pro-Nazi? Standing in the lobby of his Manhattan hotel, Trump evaluated the far right marchers in Virginia that weekend and concluded that, “You had many people in that group other than neo-Nazis and white nationalists and the press treated them absolutely unfairly.” As he spoke, Kelly, on the job only a few weeks, stood to the side, arms folded, staring at the floor.

It was inevitably only the first image in a growing series.

How much of Trump’s speech Tuesday did Kelly see or hear beforehand? In years past, one could assume the president’s chief of staff would at least know the substance of such a major speech, or had even perhaps contributed to or offered edits on early drafts. But Trump’s White House is from another political dimension, and what goes on inside it is beyond the scope of normal assumptions.

In any event, Trump’s bellicose posturing about America’s place in the world—the kind that had alienated its closest allies earlier this year at the G7 meeting in Italy—featured prominently. America, the world’s delegates were told, is getting a raw deal as the west’s foremost superpower. “The United States will forever be a great friend to the world and especially to its allies,” Trump lectured, semi-accurately. “But we can no longer be taken advantage of or enter into a one-sided deal where the United States gets nothing in return,” Trump continued as, thousands of kilometres away, U.S. fighter planes and warships sat docked at American military bases in countries around the globe.

Was it here that John Kelly, the former head of United States Southern Command, facepalmed? Or was it when Trump escalated his nuclear chest-beating contest with North Korea’s Kim Jong-Un—when he referred to the young dictator simply as “rocket man”? Or was it later, when Trump said the U.S. would work with Middle Eastern nations to “crush the loser terrorists”?

READ: Donald Trump and a bleak vision of the future

Or was it later still when Trump, a president who lacks the clarity of thought to issue something so simple as a rebuke to armed racists, xenophobes, and anti-semites on American streets, told the United Nations—an institution created in the days following a worldwide war against genocidal fascism—that “all people deserve a government that cares for their safety, their interests, and their well-being, including their prosperity”?

Maybe it was then that John Kelly pressed against his temples. When the irony finally became too crushing.

Update: Some analysis has shown that indeed, out of all the things Trump said in his speech that could have legitimately made Kelly facepalm, it was likely Trump’s statements on North Korea.