Paul Wells joins the diligent, talking-point eschewing Ontario NDP leader as she hits the campaign trail and steps into the void left by the Liberals 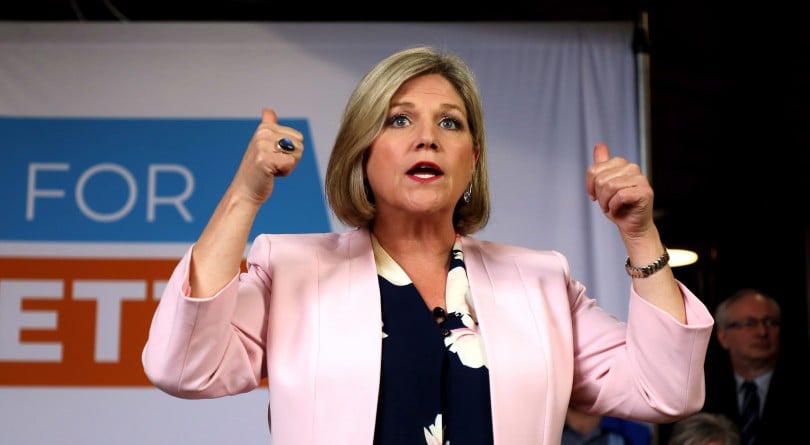 Ontario New Democrat Leader Andrea Horwath speaks at a rally in Paris, Ont., on Tuesday, May 15, 2018. (THE CANADIAN PRESS/Colin Perkel)

One measure of the opportunity that has opened up, all unexpectedly, before Andrea Horwath is the itinerary Ontario’s NDP leader followed through Southwestern Ontario this week.

The slogan plastered on the side of Liberal Premier Kathleen Wynne’s campaign bus is “Care Over Cuts.” But Horwath’s tour itinerary mapped an archipelago of pretty serious failures in care, failures that happened while the Liberals governed. Horwath paused at each stop to refresh voters’ memories about the local horror show. But few in her audience needed reminding.

In Brampton, where Horwath began her week, CTV News reported in January that 4,352 people were treated in the Brampton Civic Hospital’s hallways between April 2016 and April 2017. Horwath promised to fast-track the construction of a new hospital and to expand services at nearby Peel Memorial.

In Sarnia, changes to the provincial hospital funding formula have cost almost 80 jobs over four years at Bluewater Health. In London, staff at the London Health Sciences Centre has had to write a “hallway transfer protocol” to specify in which ungodly crannies patients should be treated when there’s no other room for them.

Get the Maclean’s Politics Insider newsletter. Sign up here >>

The Liberals have done all they could to polarize this election between themselves and Doug Ford’s Progressive Conservatives. Their last provincial budget, which carried the title “A Plan for Care and Opportunity,” opened up big new deficits to pay for generous new health and social services. Deepening the contrast with their opponent on the right is a classic Liberal play. But Horwath had a busy few days exploring the vast and fertile ground to the Liberals’ left. Just how much room to grow the Liberals have left her is becoming the central question of this campaign.

Most evenings on the campaign trail, Horwath ends her day’s formal program with an hour-long town hall on social issues. In Sarnia, she stood in the centre of a ring of about 50 people, most of them NDP partisans, and gave long answers to a total of five questions. Horwath does not think in sound bites, and while she has given careful thought to the broad direction of her public comments, she follows no particular route to each of her trail markers.

She told the Sarnia crowd about a personal-support worker she met at a long-term care residence in another town. This woman was in tears over how little time she has to devote to each resident under her care. “In fact, she has six minutes for every single resident, to get them up and dressed and ready for the day.”

“Now, I’m not going to confess to you how long it takes me to get ready every day in the morning,” Horwath continued. Appreciative chuckles from the room. “But I can tell you it takes a lot longer than six minutes.”

The point the woman she’d met was making, Horwath said, “was that it’s not just about the functionality of doing the job, right? It’s about the humanity of providing the quality of care and the personal interaction. Of having an ear and a person to talk to. Someone who actually cares.”

What’s an NDP government—still very much a hypothetical construct, though it’s getting weird out there—going to do to make that happen? “We have taken a pretty strong stand in our platform about mental-health supports. And there are a number of pieces to it. Immediately we are going to be hiring 2,600 new mental-health support workers.” This drew a cheer from the otherwise taciturn crowd.

One woman wasn’t persuaded. “How are you going to pay for it?” she asked.

Horwath’s answer was really long. The former union organizer and Hamilton city councillor has been NDP leader for nine years. This is her third election as leader. She has richly earned a reputation for being one of the least exciting politicians in the land. But there is something fascinating in her old-fashioned willingness to answer a question in detail. Even one as potentially unappetizing as how she would make Ontarians pay for her promises.

She began by taking another opportunity to explain why she needs a lot of money in the first place. “The plans New Democrats have to fund our hospitals appropriately—which is about $1.2 billion in the first year, [growing at] 5.3 per cent annually through the first term in office—” She added a few other platform commitments.

“And New Democrats think the opposite. We think the wealthiest among us, the richest Ontarians and the richest corporations, are exactly who it is that we are going to ask to pay a little more. To chip in a little bit more. To help us pay for getting rid of hallway medicine and getting rid of a mental-health system that isn’t meeting the needs of ordinary people.”

This long answer, and almost everything else Horwath said, received more or less the response you’d expect it to get from even a partisan crowd: A polite hearing, followed by polite applause. Don’t get me wrong: there was real enthusiasm among New Democrats who met Horwath this week, but it was in response to the party’s apparent rise in the polls, not to any waves of energy emanating from the leader herself.

Well into what is, in most other ways, an emotionally heated campaign, Horwath is a walking oasis of emotional detachment. In two days the harshest thing she could find to say about Wynne and Ford is that other people are disappointed in them. “That’s why so many people are disappointed with Kathleen Wynne and the Liberals,” she’d say. There was no “rise up,” no stirring slogans. Really almost no patter of the sort campaigning leaders usually use.

Horwath doesn’t have talking points so much as talking zones, broad areas of policy she is happy to discuss until she has talked a topic out. I couldn’t discern more than the broadest outlines of a stump speech. Very generally, her remarks at every campaign stop go as follows. She describes a set of problems, mostly having to do with underfunding of social services. Then she says Wynne won’t fix it. Then she says Ford sure won’t fix it either. Usually this part is accompanied with a nervous chuckle, which serves as a hint that Horwath is understating Ford’s lack of suitability, but she doesn’t push her scorn further.

Then she says words to this effect: Fortunately there’s an alternative that actually feels like you’re voting for something, not against someone. Usually at this point she says “Change for the better.” It’s the title of her platform. It’s what’s written on the sides of her campaign bus, a single vehicle that carries both the leader and the reporters who are assigned to cover her. The wi-fi password on the bus is Change4thebetter.

This was a steady theme of Jack Layton’s federal NDP for the decade that he led the party. As early as 2004, Layton staffer Brad Lavigne would tell reporters, “The lesser of two evils is still evil.” It wasn’t until his last campaign, in 2011, that Layton broke through with a campaign that offered a sunny contrast to the glowering Stephen Harper and the flailing Michael Ignatieff. The NDP had its best election ever. The Conservatives won a majority anyway. That’s one possible future for this election too.

MORE: This platform guide tells you where the parties stand in the Ontario 2018 election

Even if it does end that way, it would be Horwath’s best election. The last one was close to a disaster. In 2014 her caucus voted against the Liberal minority government’s budget to force an election. Kathleen Wynne was a rookie premier, Tim Hudak an increasingly confident Conservative leader. The conventional wisdom was that Hudak would roll right to power, and that Horwath would have made it happen.

That move, plus a studiously nondescript 2014 platform—its title was Plan That Makes Sense—attracted a flock of back-seat drivers, an eternal occupational hazard for any NDP leader. Thirty-four people, including activist Judy Rebick and journalist Michele Landsberg, wrote to Horwath to say they were “deeply distressed” that Horwath had “voted against the most progressive budget in recent Ontario history.” She was “running to the right of the Liberals in an attempt to win Conservative votes.” They were thinking of not voting NDP. Somebody took care to leak the letter to reporters.

Horwath came out of the election with as many seats, 21 in a 107-seat legislature, as she’d gone in with. She won 77 per cent support in a leadership review vote soon after the election. It was enough to let her stay on as leader, and actually a point higher than in the previous review in 2012, but still not a stirring endorsement from her own members. 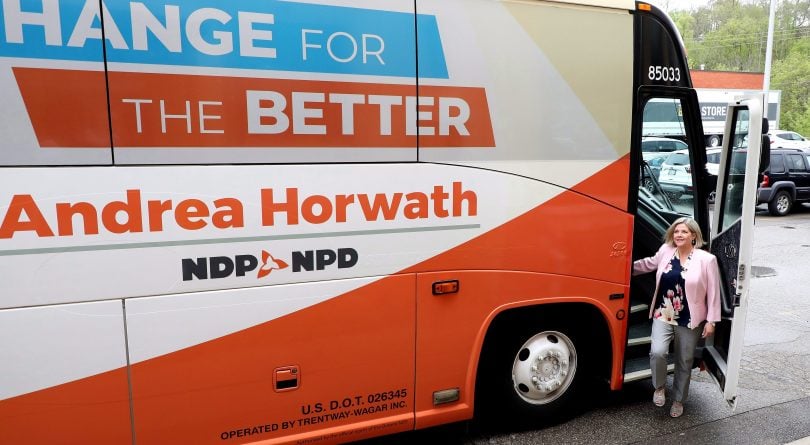 This year the context is more propitious: the election isn’t Horwath’s fault, and she is taking no fire from her own troops. Sticking with the Liberals is no longer the done thing in progressive circles. Which is lucky for the leader, because Horwath’s platform flirts in interesting ways with apostasy from a few articles of social-democratic faith.

Her child-care plan would cover more children than the Liberals’, but would be free only to children in families earning less than $40,000 a year. Beyond that, fees increase with family income and would average to $12 a day. “We could have gone in a different direction,” she told me in an interview. “But the cost is ginormous. And we want to do other things as well.”

Her dental-care plan isn’t universal: it covers only people who don’t have dental coverage through work. “We wanted to fix the pieces that were broken,” she said. “Not the pieces that are not.”

With benefits that phase in and tax increases that phase in to pay for them, Horwath cuts a cautious figure. Some of Wynne’s projects don’t impress her at all. In London she was asked about high-speed rail, on a day when the Liberals’ message of the day was that only Liberals could be trusted to build high-speed rail. Horwath as much as confirmed it. Sure, she’s committed to completing feasibility studies already commissioned. But in the same breath she listed her concerns with the notion: That it will do nothing to improve transportation for people who live away from the train corridor and that it’ll hurt farmland.

It’s pretty clear her heart isn’t in the project. Instead her regional platform for southwestern Ontario lists more mundane proposals to improve local public transit and regional trains and roads.

Her willingness to abstain from the Liberals’ big engineering projects gives Horwath a focus that Wynne lacks. If Ford is the standard-bearer for Ontarians who think government costs too much, Horwath is the champion of those who think life is too hard to navigate, and who wonder why even a profligate provincial government hasn’t been able to deliver better care.

It would be reckless to predict how far the NDP will go with its distinctive pitch. But Horwath leads a more unified party in a field that gives her more room to run than she has ever faced before. In her diligent, unspectacular way, she is making the most of it.

—with files from Tom Yun