Stephen Maher: In a lecture to cheering NYU students at New York's Yankee Stadium, the PM called for mutual respect and openness 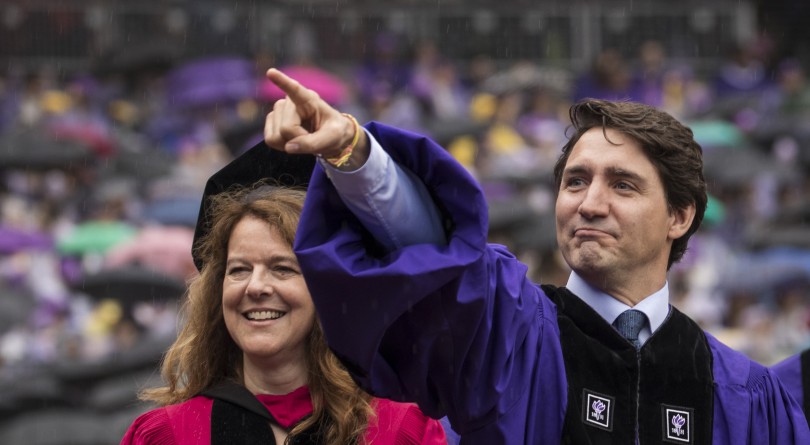 Justin Trudeau came as close as he should ever come on Wednesday to denouncing Donald Trump.

Standing at second base of Yankee Stadium—where the U.S. president has box seats—Trudeau spent 20 minutes telling the 2018 graduating class of New York University to embrace diversity, to reject nationalism.

Young New Yorkers like Trudeau, seeing him as the anti-Trump—the handsome young feminist from Canada—and the students cheered whenever his smiling face appeared on the jumbotron during the commencement address.

If they have heard about his misadventures in India, they showed no sign of it.

Trudeau didn’t mention Trump, but none of the thousands of students and parents sitting in the drizzle listening to Trudeau could have missed the point.

He didn’t just mention in passing, as he does in every Canadian speech, that diversity is strength. It seemed to be the whole point of coming to Trump’s home ballpark to address the students of one of the most Liberal colleges in the United States.

He is walking a fine line with this kind of thing. No political issue is more important to the government of Canada than managing the trade relationship with the United States.

Trudeau and his team have worked hard at sucking up to Trump and his team in the hopes of stopping him from destroying NAFTA. You can tell that the Trudeau team has done a good job at it—involving business people, diplomats and former prime minister Brian Mulroney—because the Conservatives don’t accuse them of flubbing it. It’s the one issue that is so important to Canadians that it’s beyond partisan politics.

Given that our economy hinges on the outcome of the tense negotiations, Trudeau can’t afford to say anything bad about Trump.

He would surely like to say that Trump is risking the world economy by stupidly blundering into trade wars, risking war in the Middle East by tearing up the nuclear deal with Iran, and risking the future of the planet by denying the reality of climate change, but he can’t.

French President Emmanuel Macron, in Washington last month, was able to openly criticize Trump policies on climate and foreign affairs in an address to Congress. Trudeau would no doubt like to do the same, and give our neighbours a little lecture on how they are heading to hell in a handbasket. But the United States is by far the most important customer for most of what we have to sell, so Trudeau can’t be as blunt as Macron.

But it’s Trudeau’s job to tell the world what his government stands for, which means stopping just short of saying that Trump is risking everything that sensible people hold dear.

Instead, Trudeau had to settle for telling the students that diversity is strength.

He told them about his political idol, former prime minister Wilfrid Laurier, holding him up as an example of a leader who found common ground beyond his French Canadian roots.

He called on the students to be open, like Laurier, to those who hold opposing views.

“Let me be very clear: this is not an endorsement of moral relativism, or a declaration that all points of view are valid. Female genital mutilation is wrong, no matter how many generations have practiced it. Anthropogenic climate change is real, no matter how much some folks want to deny it.”

Here in the Bronx, where Trump won just nine per cent of the vote in the 2016 presidential election, the students gave their loudest cheers of the day for that line.

Trudeau told the students that appealing to tribalism is the easiest way for leaders to rally support, but building common ground between tribes is a higher calling.

“This is the antithesis of the polarization, the aggressive nationalism, the identity politics that have grown so common of late,” he said. “It’s harder, of course. It’s always been easier to divide than unite. But mostly, it requires true courage.”

It’s a measure of how dark and strange American politics have become that this bland call to mutual respect and openness can be taken as a rebuke of Trump, but that’s where we are.