The PM's longest hug time went down by half between 2015 and 2019. Our hug-o-meter tells you exactly how long each hug was at the cabinet swearing-in ceremony. 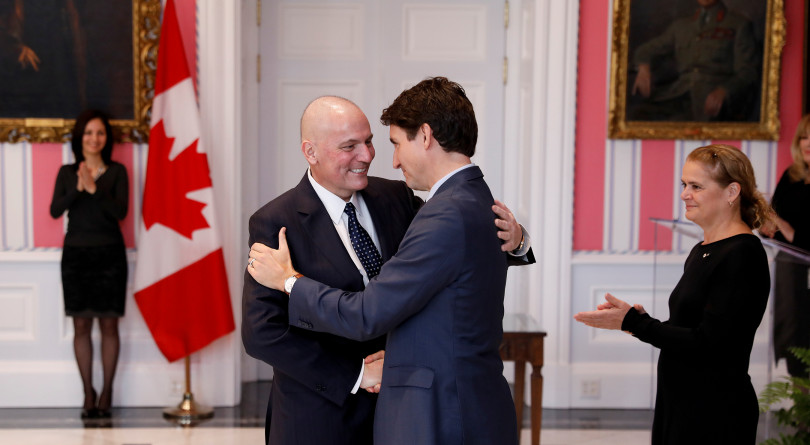 Dominic LeBlanc is embraced by Canada's Prime Minister Justin Trudeau after being sworn-in as President of the Queenís Privy Council for Canada during the presentation of Trudeau's new cabinet, at Rideau Hall in Ottawa, Ontario, Canada November 20, 2019. (Blair Gable/Reuters)

Last time around, new Prime Minister Justin Trudeau—an admitted “good hugger”—snuggled the longest at the 2015 swearing-in ceremony with Minister of Science and Sport Kirsty Duncan for a whopping 12 seconds. (Just how epic is that hug? Hug your spouse for 12 straight seconds tonight, I dare you.)

After a hard election full of emotional ups and downs, we expected Trudeau’s big feelings to manifest in longer lingering hugs and extra kisses (plus respectful back pats and shoulder drapes). But we were wrong, and the Trudeau hug-o-meter shows our PM toned the PDAs way down, from 12 seconds to just six.

Still, even if Trudeau is working hard to not play favourites, viewers saw some of the 36 ministers score extra snuggles while others hardly got a pat on the arm. Those who enjoyed a little extra love from the PM include Lawrence MacAulay, who had the good luck of going first; the slightly controversial pick Seamus O’Regan, new Minister of Natural Resources and clear long-time Trudeau bro; and Carla Qualtrough, who charmed the crowd, after asking clerk Ian Shugart to reveal the large-text oath (Qualtrough is visually impaired).

Garnering a slightly chillier reception, however, were newcomers Bardish Chagger, Minster of Diversity, Inclusion and Youth, and Karina Gould, Ministry of International Development. Both were kissed twice on either cheek, but did not hug their new boss. Neither did crowd-pleasing golden girl Chrystia Freeland, the PM’s new deputy.

And the winner of the 2019 hug-o-meter? Dominic LeBlanc, now President of the Queen’s Privy Council, who’s currently battling cancer and received a standing ovation.