May 24: In Ontario, the premier admits there's a disconnect between her and some voters and the NDP are now virtually tied for first with the PCs.

How well do you know Kathleen Wynne?

Kathleen Wynne knows there’s a disconnect between her and at least some of the people of Ontario. And her government’s mistakes are many. But the seemingly soon to be ex-premier is an exceptional example of the duality that’s common to every politician, writes Shannon Proudfoot in her close character study of the Liberal leader. [Maclean’s profile]

“There is the Kathleen Wynne she and her supporters see: the unabashed progressive she traces back to a little girl whose physician grandfather accepted homemade baking in lieu of payment. And then there is the idea of Wynne that has taken hold—a cynical opportunist with the governmental version of a compulsive shopping habit—and become a sort of piñata for a weirdly keyed-up electoral frustration.”

The not-panicking vibe might have something to do with the NDP’s poll numbers—our Maclean’s-Pollara poll has them in a virtual tie for first. [Maclean’s story] 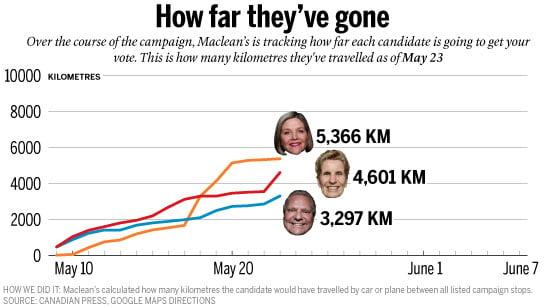 Jason Kenney versus errybody: The leader of his self-crafted United Conservative Party can be found in conversation with our Paul Wells this evening in Ottawa. The longtime capital player is bidding to replace Rachel Notley in Alberta, but he’s not short of opprobrium for Justin Trudeau and his band of merry federal Liberals. [Maclean’s live stream]

Remember when Bill Morneau said he didn’t have “anything to report” by way of possible buyers for that Trans Mountain thing, even though surely “plenty of investors” would want a piece of this pipeline? We’re now halfway between that set of sayings and Kinder Morgan’s decision deadline, and nobody is yet putting their paddle up to bid. [Maclean’s story, Canadian Press story]

The Senate for its part has declared the project to be nationally interesting, so that’s something. [HuffPost story]

Next man up: Ahmed Hussen gets a special four-hour quizzing tonight, with Michelle Rempel playing lead questioner in a yearly tradition ostensibly about fiscal accountability that’s mostly an exercise in points scoring. At Morneau’s on Tuesday, each side spent a fair bit of theirs invoking time-wasting penalties against the other.  [Globe story, Globe story]

The troops could soon be up a few bottles of whisky and down some schnapps as one of Canada’s longer-running territorial disputes comes up for resolution. Our government and Denmark’s are setting up a crack team to deal with outstanding boundary brouhahas, including the case of Hans Island, a small farm-sized rock where sailors swap national ensigns and local liquor every so often. [Toronto Star story]

Today marks the centenary of the passage of the federal bill giving women the right to vote in federal elections. The law decreed that any woman who was 21 years of age, born in Canada and able to meet property requirements could cast a ballot in the next election.

The best lunchtime Ottawa tribute to such transformative electoral reform is surely to set up a Parliament Hill picnic beside the Famous Five statue, the capital’s tribute to the women (and suffragettes) who argued–successfully—that they were people in the eyes of the law.