Kathleen Wynne exits the stage, leaving tears, thanks and a party in ruins

The poignancy of her speech was crowded out by the reality of crushing electoral defeat. Where do the Liberals go from here?

Four years ago, it was a huge party. When Kathleen Wynne took to the podium for her victory speech, the red backdrop had the words: “What leadership is.” Emphasis theirs. The crowd chanted Wynne’s name. They chanted her wife’s name. They chanted for some kid named Noah. Wynne had just become the first woman to be elected premier of Ontario. They couldn’t stop cheering.

On Thursday night, there wasn’t so much as a single red balloon in sight. The crowd of supporters? At the moment news outlets called a Progressive Conservative majority in Ontario, the Liberal HQ crowd in the main room was small enough to tally with a quick headcount: about 35 people, not counting members of the media, who outnumbered them.

It wasn’t as though anyone expected Liberal reception to be packed enough on election night to worry the fire marshal. Wynne herself held a press conference five days prior to election day to admit she wasn’t going to win. They just hoped it wouldn’t be like this: a Ford leading Ontario, a Liberal Party without a leader and a party with a showing so poor that it potentially cost them “recognized status” in the provincial legislature.

As a flow of Liberal volunteers and supporters slowly trickled into Toronto’s York Mills Gallery after polls were closed to mark or mourn the end of the party’s 15-year reign, the small but growing crowd were afforded few moments to cheer. They did when TV results showed Wynne on track to win her Don Valley West riding. And they cheered again when Wynne arrived to give her final speech as leader of the party.

“This is not a concession speech. I conceded I was not going to be premier days ago,” Wynne said. “This is my chance to say thank you for allowing me to be your premier.” 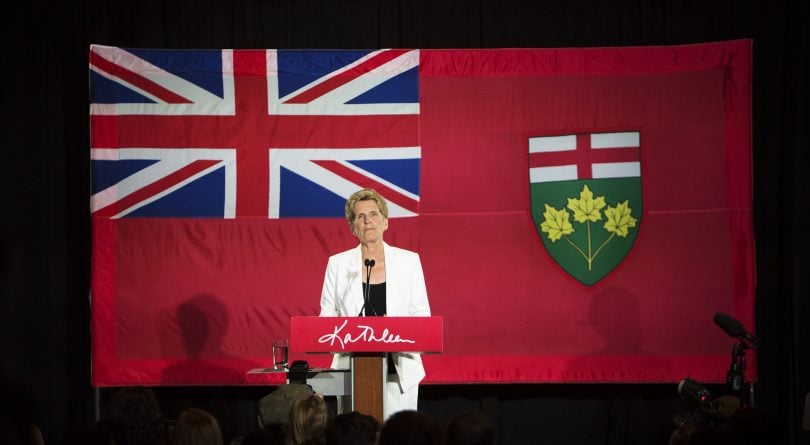 She thanked her staff and volunteers. She thanked her family. And she thanked Ontarians as she listed her policy achievements, from raising the minimum wage to getting drug-plan coverage for youth.

And then she announced she was resigning as leader of the party. “It’s the right thing to do.” Wynne said. “There’s another generation, and I’m passing the torch to that generation.”

The crowd applauded, but it was hard to look upon that torch as anything other than smoking and broken, with the Liberals on track for its lowest seat total at Queen’s Park in the party’s history. (Their previous low was seven in 1951, when there were fewer seats up for grabs.)

RELATED: The triumph of Doug Ford

“Right now climate change, technological change, Donald Trump, protectionism, populism, make our world particularly complicated,” Wynne said. “Our job, and I mean all of us, is to tackle those forces and make sure we assert our values.”

By the time Wynne finished and waved her goodbyes, the only question remaining was whether she’ll keep her seat in Queen’s Park. The Liberals were winning or leading in seven ridings, including Wynne in her riding of Don Valley West, one short of the eight-seat threshold at Queen’s Park to maintain recognized status—and with it all the added benefits of funding, being on committees and opportunities to speak in the legislature.

“The premier has already been very public about saying we’re not going to win this election,” said Deb Matthews, the Ontario Liberal’s campaign co-chair. “But we want to win as many seats as we can.”

In a late and possibly fateful strategic shift, Wynne had called on Ontarians to vote for Liberals—not to win this time, but to stop either the Conservatives or NDP from winning a majority. Furious, some Liberal candidates began canvassing with materials stripped of the Liberal brand and it’s signature red colour—along with any mention of Wynne.

Definitely proud to be a Liberal candidate. pic.twitter.com/guMWLNXQob

You could view that gambit as a success or a failure—depending on whether you consider avoiding electoral obliteration a moral victory. And some of Wynne’s most dedicated supporters seemed to buy in. “I hope Kathleen gets reelected in Don Valley West,” said Liberal supporter Lorna Krawchuk, prior to the election results. “And I hope the polls that call for a Conservative majority are wrong.”

Now, as the province prepares for four years of a Conservative majority government, anti-Doug Ford Ontarians will be left to wonder “what if” the Liberals hadn’t siphoned off so many votes from the NDP, especially with the Grits asking for support in the run-up to election day to prevent a potential NDP majority (which no pollster was predicting).

New Democrats will complain, but they wouldn’t be the first to do so about Wynne, who throughout her term in office had an odd way of projecting defiance even when she was acknowledging failure. As she left the stage, the music rang out loud: “I’m still standing.”