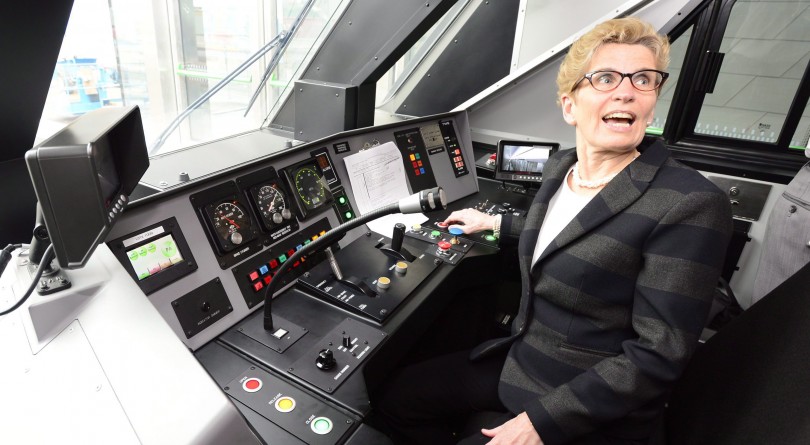 It would be good to preface this column with a confession. I love trains. I loved taking trains while tooling about in Europe in my 20s. I would happily trade additional travel time to enjoy the comforts of a train in favour of airport security and an airline seat.

I love trains so much that I was an early advocate for the Toronto UP—the express train between Union Station and Pearson Airport, a white elephant so useful that the service recently had to cut its ticket prices in half to encourage more people to use it. I’m still rooting for that line, by the way. You keep on choo-chooing, UP!

So I really do want to love the fact that the Ontario government committed in its recent budget to spend $11 billion on just the first leg of a high speed rail between Toronto and, um, Windsor, Ont. (population in the 2016 census: 320,000).

But I can’t love it. Because this idea is insane.

“If you look across the world, there is no country building high speed rail to any metropolitan area as an end point with less than 500,000 people,” says Baruch Feigenbaum, assistant director of transportation policy at the Reason Foundation, a free-market American think tank.

Train lovers like myself often like to lament the fact that Canada is the only G7 nation without a high-speed rail line, as if that fact makes us technologically backward—as opposed to merely sparsely populated.

But as Feigenbaum points out, there are only two high-speed rail lines anywhere in the world that make any money after factoring in build and operating costs: Tokyo to Kyoto, and Paris to Lyon. “There is another line in Japan that breaks even. All of the rest of the High Speed Rail projects in the world lose money and some lose a lot of money,” Feigenbaum says.

READ MORE: Kathleen Wynne’s re-election bid is off to a bad start

“In the North American context, you need at least 3 million people in each of the metropolitan areas [you’re serving]. You need incredibly high population density in both of these cities. You need very good inner-city transit systems and you need generally low rates of car ownership.”

Toronto qualifies as a reasonable high speed rail hub by this definition. Windsor does not.

Being particularly expensive to both build and operate, high speed rail isn’t designed to be an everyday commuter option. It’s really more of an alternative to short-haul flights. The cost for a one-way ticket generally runs about 2/3 of the cost of a similar flight—anywhere between $75 to $200 each way. Governments, such as France, subsidize that ticket price. And places like France are increasingly finding their trains still can’t compete with low-cost European air carriers.

As a commuter option, the problems with high speed rail are quickly made apparent. If this train is built, it will still take about two hours to commute between Windsor and Toronto. High Speed Rail would cut travel time between Toronto and Kitchener in half, to about 48 minutes, but these trips would only take commuters to Union Station. And how many daily commuters are expected to shell out, say, $100 per day, or $50 to make that trip? How much will the government subsidize the shortfall?

These are the sorts of questions that Kathleen Wynne’s government should be able to answer before it throws down $11 billion, yes?

Using the “Field of Dreams” theory of economic analysis, there will be those who argue that if Ontario builds commuter high speed rail to Windsor, the population will come. If Feigenbaum is correct, Windsor would need to double its population at least four times over before this idea ceases to be insane.

If we’re building high speed rail, wouldn’t it make infinitely more sense to connect Toronto to Montreal? Greater metropolitan areas with populations of six and four million, respectively? Maybe throw in a stop in Ottawa along the way?

The Ontario government is claiming that this high-tech “Innovation SuperCorridor” train will bring economic benefits over 60 years of $20 billion. It comes to this handy math by factoring in things like passenger travel time, automobile operating costs, greenhouse gas reduction and other unspecified benefits from reduced congestion.

That figure—$20 billion—is also what it will ultimately cost to build the train, if not operate it. In other words, this train will cost about as much money to build as it will bring in economic benefit—even economic benefits as vague and undefined as “passenger travel time.” Simply handing out $20 billion in taxpayer cash to companies in its Innovation SuperCorridor will also produce economic benefits—probably more tangible ones than anything this train is promising.

While we’re at it, high speed rail has proven to be a pretty mixed bag at reducing congestion and greenhouse gas emissions, too.

And does someone need to point out the folly of making major rail investment now, right before we see the potential of autonomous vehicles? When working from home and telecommuting is becoming more mainstream?

I swear I have squandered days of my life thinking about this train to Windsor and I’ve come to the conclusion that it is an onion of stupid. Every layer you peel away reveals some new and terrible aspect that doesn’t make any sense.

My home province is Alberta. Say what you will about our fiscal management, but Alberta is religious about debt. This superstition serves a salutary effect. It means we tend to get straightforward assessments on moonshot ideas like bullet trains between Calgary and Edmonton.

Yet nobody in Ontario seems to be scrutinizing this $11 billion spending promise from Wynne with even the slightest bit of skepticism beyond asking whether or not it will actually get built. I assume that’s because most Ontarians have already dismissed it as a go-nowhere cockamamie election promise.

That’s the optimistic view. The other, grimmer one, is that Ontario has become so inured to its own debt load that a high-speed white elephant to Detroit now generates little more than a shruggie. Sure, add that $11 billion to the $312 billion pile. Maybe Bombardier will get a sweetheart deal and the Liberals will win a few teetering rural or suburban ridings, but at least we get a train out of this one.

I mean this as a word of kindness: A little old school religion may prove to be a necessary tonic, here.