A dauntless campaign helped propel the Ontario Liberals to a majority government, despite a record of scandal 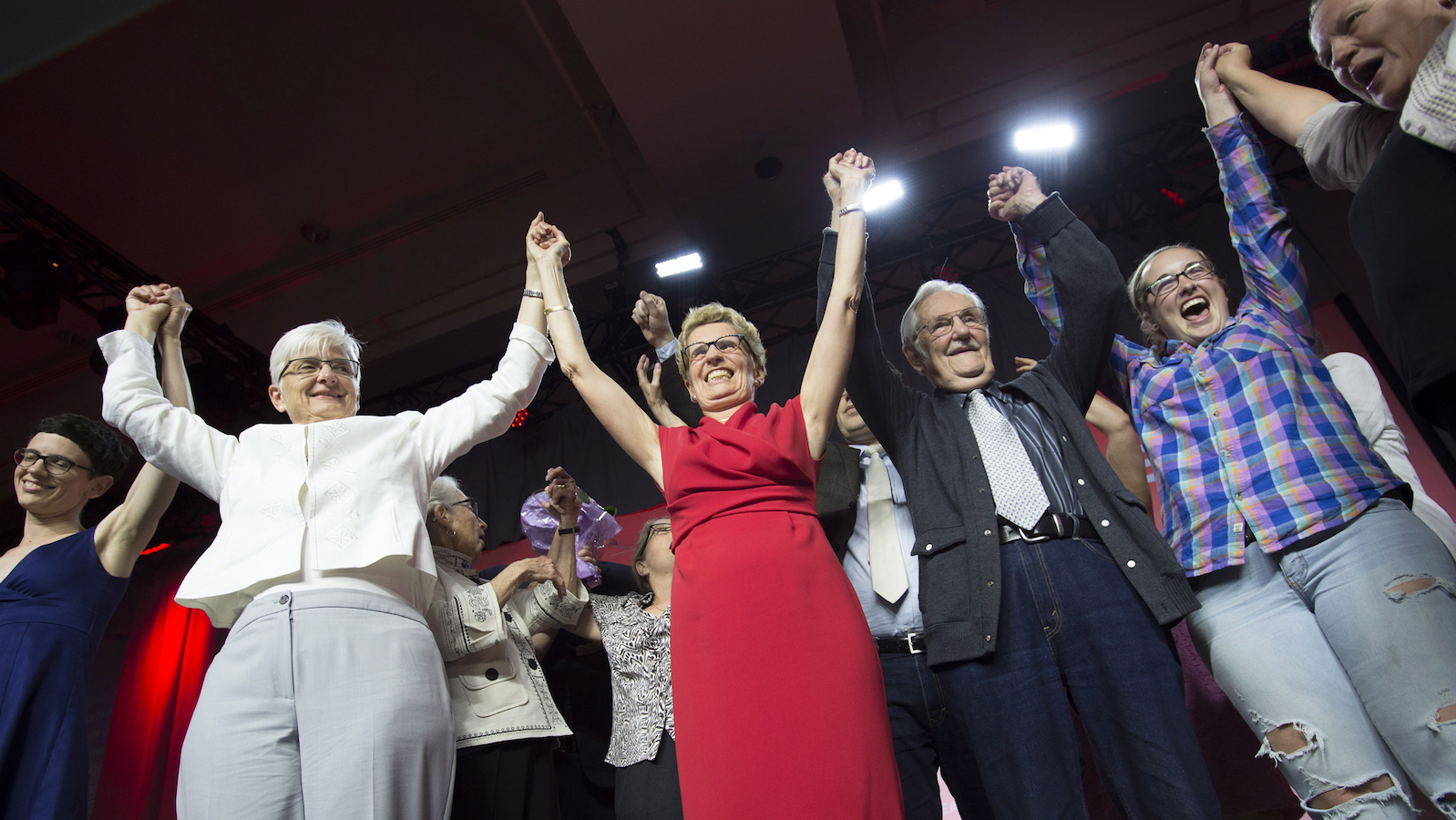 Thursday night put many things to rest in Ontario—the NDP’s grip on the balance of power; and Tim Hudak’s leadership of the provincial Progressive Conservatives, to name a couple.

But the most notable casualty in this stunning provincial election was that much-dreaded instinct of voters to “throw the bums out,” once described to me as the most reliable force in Canadian politics.

Four times now—in Newfoundland, Alberta, B.C. and Ontario—parties ridden with scandals or burdened with poor policy decisions have defied the laws of political physics by righting themselves and sailing on. In each case, a woman provided the face of renewal (a topic for another day).

In this case, Kathleen Wynne and the Liberals emerged with a 59-seat majority, to the Tories’ 27 seats and the NDP’s 21.

“I have to say, wow,” says Jonathan Rose, a political studies professor at Queen’s University who has followed the campaign closely. “By changing the leader, the Liberals have refashioned the party into a new image. They’ve been successful in distancing themselves from [former premier] Dalton McGuinty, and any anti-McGuinty criticism or attacks just weren’t seen as plausible by voters.”

Much credit goes to the leader, a dauntless campaigner whose grace amid a rhetorical pounding suggested that honest, sensible government just might be available from a previously dissolute party. There was a time when a record of mismanagement that included eHealth, Ornge, the gas plant fiasco and a ballooning deficit would have sent a party to the penalty box. By giving the voters humility, Wynne helped rescue the Liberals from ignominy.

Wynne’s team, too, deserves props for spotting opportunity on the left side of the political spectrum, and maximizing it with efficient messaging and ground work. Complain all you want about the inherent unfairness of the first-past-the-post electoral system, but not every party can squeeze a majority from 38.2 per cent of the vote.

Still, there were other factors at play in Thursday’s outcome: miscalculations by her opponents; highly effective attack ads; and a union-backed anti-Hudak campaign whose influence is hard to overstate, given the result.

In many ways, the campaign was a showcase of modern electioneering in all its data-driven banality. Convinced that turnout would be as low as it was three years ago, when 48.2 per cent of eligible voters cast ballots, the parties dispensed with wide-band messaging aimed to attract a broad base of support.

Instead, they deployed sharply divisive policies intended to motivate their most reliable supporters into going to the polls—a method as logical as it was cynical. When few people vote, the strategists reason, a good turnout by a party’s base can determine a local contest. Better to nail down votes you have, than to chase ones you’re unsure of.

For Hudak, this meant deploying a crude strain of hard-line conservative rhetoric. In the first week of the campaign, he proudly announced he would slash 100,000 public sector jobs soon after assuming office, using the proceeds to fund a 3.5-point cut to corporate taxes. Those measures, he said, along with reduced regulation, would boost private sector employment. In was deep-blue Tory politicking at its best—or worst, depending on your outlook.

Wynne, meanwhile, unapologetically began mowing NDP grass with left-leaning promises like an $11 minimum wage indexed to inflation, and an Ontario-only pension plan funded in part by employers. Far from promising to shore up the province’s finances, the Liberals campaigned on a free-spending budget that proposed to push the province $12.5 billion further into the red.

All of which left Horwath on the outside of the fray, pitching herself as a fiscally responsible Third Way (though she didn’t use Tony Blair’s term) who could be trusted to govern with a conscience. Running to the right of the Liberals was an unaccustomed position for the NDP, and it highlighted deep divisions between Horwath’s circle and party elders. In the middle of the campaign, a group of 34 penned a damaging letter to her, accusing their leader of acting like a Tory.

The attack threw a spanner into the New Democrat campaign. But it paled next to the onslaught faced by the PCs.

As in elections past, organized labour poured money and manpower into an anybody-but-Hudak movement, urging members to vote for the candidates in their ridings who had the best chance of beating the PC leader. When coupled with Liberal attack ads, the effect was to paint Hudak as a right-wing wild man even Mike Harris fans couldn’t trust.

The so-called third-party advertising allowed under Ontario elections law is sure to remain a hot topic for years to come. Funded largely by teachers’ federations and trade unions, the groups who weighed in this time operate barely within rules forbidding them from campaigning on behalf of candidates or parties. Tory MPPs like Lisa MacLeod complained bitterly last night of “unprecedented attacks” (conveniently ignoring their own party’s history of relentlessly negative advertising against McGuinty).

Whatever their future, the rules helped the Grits execute a divide-and-conquer strategy that left Ontarians feeling as though they had no alternative but to give Wynne her kick at the can. On one side was an NDP with a seemingly split personality; on the other, a PC party that sounded increasingly like the anti-government fanatics in the U.S. Tea Party. Ontarians, says Howard Hampton, the former NDP leader, “just aren’t going accept a slash-and-burn approach. They don’t want to go there.”

Suffice to say, no one should forget the “divide” part of the Liberals’ success formula. As it became clear that Wynne was headed for victory, party strategist Tim Murphy boasted to the CBC that the result showed that Wynne’s deficit budget was “clearly something the people of Ontario want very much.”

In fact, six out of 10 who cast ballots voted against the Liberals, and financial pressures will almost certainly force her to forgo some of the promises that budget would fund. As Hudak put it in his concession speech: “No one should mistake tonight’s result as an endorsement of the status quo.”

Then, shortly after that, Hudak announced he’d be stepping down as leader, having seen a four-point drop in his party’s popular vote, and the loss of seats in its 905 heartland. Horwath’s future is clouded, too, though her party maintained its seat count and nudged up its popular support. “There’ll be some people in the NDP who will be unhappy [with Horwath],” says Hampton, “but they will be in the minority. The Liberals were on a wave in the Greater Toronto Area—that’s where they picked up seats—but New Democrats weren’t swept under by that wave.”

All of which is to say the path has cleared for Wynne to govern without fear of running afoul of opponents who could bring down her government. She’s the first woman to have led her party to an Ontario election win, but she inherits a province deep in debt, desperate for jobs and struggling to find its economic footing.

Her truly hard work has not yet begun.