Leaders debate 'environment' segment reveals the adults in the room

Anne Kingston: Annexing discussion of the environment in a category is particularly egregious at a moment many voters say the climate crisis is high on their list of concerns. 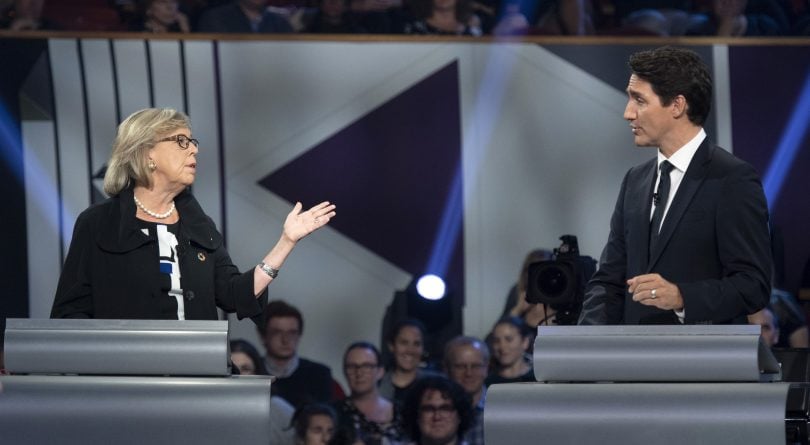 May and Trudeau at the Federal Leaders Debate on Oct. 7, 2019 (Justin Tang/CP)

There’s something decidedly anachronistic about a 2019 federal leaders debate in which “the environment” is annexed as a category, distinct from “the economy” or “Indigenous issues” or “immigration.” It’s old-fangled thinking that suggests the “environment” exists outside of everything—just a bunch of pretty trees and lakes and mountains. It’s particularly discordant at a moment the majority of Canadian voters list climate change high on their list of concerns. We know with increasing clarity that the “environment” can’t be subtracted from society or civilization itself, as evident in everything from the human and economic costs associated with flooding and forest fires to the rising numbers of climate-change refugees. And then there’s the incalculable impact on health and healthcare, topics that didn’t merit discussion at Monday’s night’s debate. Organizers lumped the “environment” with “energy,” itself highly telling of a mindset in a country where energy is reflexively synonymous with fossils fuels, not solar panels.

The impossibility of segregating the environment was evident early on in a debate that was less debate than cross-talk shouting match. Unsurprisingly, it first came to the fore during discussion of “Indigenous” issues. Conservative leader Andrew Scheer expressed concern that First Nations in favour of pipelines were not being heard, a comment that suggested concern for the pipeline being built as much as the opinions of those who supported it.

Elizabeth May, leader of the Green Party of Canada, pointed out that Indigenous peoples count the climate emergency as the number one concern, before asking Trudeau if he would support a cross-party inner cabinet to confront the climate crisis. Trudeau didn’t answer. Instead, he boasted that no government had done more for climate change than his. May, a climate activist since childhood who was a policy advisor in the Ministry of the Environment when Brian Mulroney was prime minister, disagreed. “Paul Martin did more,” she retorted, noting that Trudeau’s climate targets are unchanged from those of prime minister Stephen Harper and are inadequate.

The “environment” also provided a proxy for larger themes. Most obviously, five of the six leaders used the climate file to suggest that a big gap exists between what Trudeau says and what he does, with much talk about a professed “green” PM buying a billion-dollar pipeline. It also exposed the divide in the candidates—from May, who calls this election a national referendum on climate change, to Maxime Bernier, leader of the fringe People’s Party who doesn’t believe in climate change and who previously  tweeted that 16-year-old Climate Strike leader Greta Thunberg is “mentally unstable.” Bernier also claimed the People’s party is the “only environmentalist party, ” a declaration so outlandish no one even bothered to bite. During the debate, he called May a “socialist” and declared that the Green’s platform would ruin Canada’s economy.

Bridging their ideological divides temporarily, NDP leader Jagmeet Singh and Scheer tag-teamed to slam Trudeau’s record, though Scheer didn’t join Singh in his attack on the Liberal government for spending $4.5 billion on the TransMountain pipeline and for “subsidizing oil and gas and exempting biggest polluters.”

Predictably, the recent revelation that the Liberals are using two planes during the campaign received airing. Scheer criticized the party for buying carbon offsets as “a thing privileged people can do.” Trudeau’s rejoinder was that Scheer, who doesn’t buy offsets, was a climate change denier: “You didn’t buy offset because you don’t believe in climate change.”

Trudeau cleaved to talking points—that the Liberals’ climate plan was “ambitious and doable,” that they would plant two billion trees annually, that his government had reached two-thirds of the Paris Accord targets for 2030 and would surpass them, and that a government under Andrew Scheer would rip up the only plan to fight climate change we have ever had. Given the stop-start nature of the debate, details of those climate plans received no airing. Yves-François Blanchet, leader of the Bloc Québécois, accused the Liberals and Conservatives of being no different in their climate change policy, a comment destined to get a reaction from Trudeau.

Throughout the climate change discussion, Trudeau often went silent or off topic. When asked if Canada should be moving more quickly on climate change given an increasingly dire global prognosis, and also if TransMountain would be the last pipeline in Canada, the Liberal leader answered “absolutely” to the first part of the question. He rhymed off his government’s ban of single-use plastics, putting a price on pollution, and presented himself as a federal enforcer who’d fight Conservative premiers who don’t recognize climate change. He’d invest money from the pipelines into a new clean-energy economy, Trudeau avowed, noting any transition won’t happen “overnight.” Moderator Rosie Barton called him out: “You didn’t answer the last part, whether this would be the last pipeline,” she said.

Climate crisis also yielded one of the most impassioned exchanges of the evening between May and Trudeau. “To avoid catastrophic levels of global warming, we must double our current target, we must listen to science, we must not build the Transmountain pipeline,” May said.  “You can’t negotiate with physics. There’s a carbon budget; it doesn’t budge.”

Throughout the debate Green Party leader repeatedly expressed her disappointment in Trudeau, contending that his government hadn’t heeded science and evidence: “It’s so heartbreaking for me to look at you today and know you could have done so much more these last four years,” she said, before raising her voice in alarm:  “Please God you don’t get a majority this time around because you don’t keep your promises.”

Trudeau steered discussion to his role vanquishing Conservative climate-deniers: “From the Rockies to the Bay of Fundy, Conservative premiers have gotten elected on promises to do nothing on climate change,” Trudeau said. “And we need a strong federal government to fight them, to make sure that we are moving forward on protecting the future generations from the impacts.”

May was having none of it. “But your goal is a target for failure when you hang on to Harper’s target of 30 per cent.”

“We are going to pass that target Ms. May,” Trudeau said.

“Well, you better double that target or you will never get to carbon neutrality by 2050,” May said.

May telegraphed authority and a sense of urgency throughout the night, referring to the IPCC (the UN’s Intergovernmental Panel on Climate Change) timelines and the need to hold global warming to 1.5 C. A question to the leaders from a student in Halifax echoed this urgency: “I believe we live in an age of climate crisis,” he said, expressing fear that this election would be the last before a point of no return. “What concrete plans does each leader have to address big business pollution?”

May grabbed the opportunity to undo the “socialist” label: “We have completely mischaracterized our response to the climate emergency as something that doesn’t help the economy,” she said. “You have the biggest global economic opportunity in the history of humankind in moving off fossil fuels as quickly as possible.”

Trudeau interjected: “I agree. I agree,” he said.

May shot him down. “But you’re keeping fossil fuels going because your target is exactly half of what is required. If this election is anything, it’s about trust and ethics and we are in a climate emergency. We need grown-ups in the room to take responsibility.”

Questions turned to Blanchet, who asked Trudeau if he could promise not to pass a pipeline through Quebec. Trudeau deflected.  “No answer,” Blanchet concluded.

When asked to pose a question to a political rival on the subject of the “environment” or “energy,” Trudeau chose not to. Instead, he took another shot at the Conservative trifecta—Harper, Scheer, and Ontario premier Doug Ford. By then any discussion of “environment” or “energy” was over. Talk among the male leaders shifted to taxation, tax credits, even the single tax form in Quebec, and that old election chestnut: putting money in taxpayers’ pockets. Scheer boasted that the bevy of tax credits in the Conservative platform included one for a “Green home” tax credit. Time was up before anyone could ask what that even meant. Given what preceded it, it didn’t really matter.