Politics Insider for May 3: Angry so-cons; the love-fest in Ontario 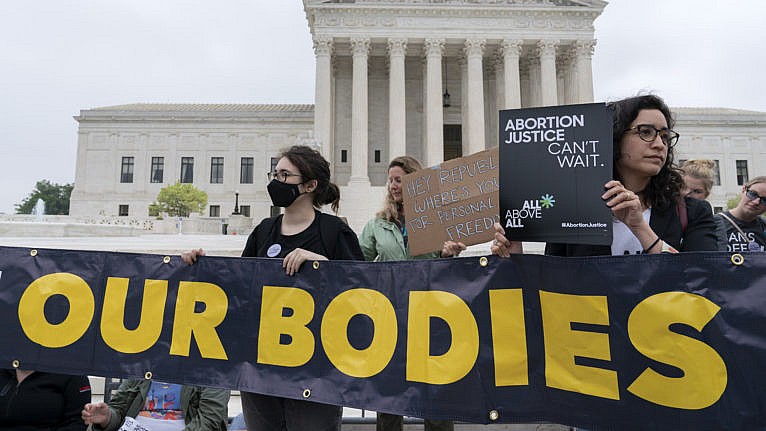 Demonstrators protest outside of the U.S. Supreme Court Tuesday, May 3, 2022 in Washington. (Jose Luis Magana/Associated Press)

Politico has a big scoop: A leaked draft shows the U.S. Supreme Court is about to undo the landmark Roe v. Wade decision, opening the door for “stricter limits on abortion access in large swaths of the South and Midwest, with about half of the states set to immediately impose broad abortion bans.”

The leak is in itself newsworthy, and the political ramifications are big enough that they are sure to be felt on this side of the border.

‘Lynching’? Meanwhile, in Canada, the CPC announced the six candidates who will appear on the ballot in February, and three social conservatives didn’t make the cut, although they filed 500 signatures and ponied up $300,000, CBC reports. The candidates are displeased.

Not on the ballot: Grant Abraham, Joseph Bourgault and Joel Etienne.

The non-candidates are all social conservative newcomers to politics. The party didn’t say why it excluded them, but the rules allow it.

According to the party’s leadership election rules, the Leadership Candidate Nomination Committee (LCNC), the group of party stalwarts reviewing applications from would-be candidates, can also rely on “any other information they see fit to ascertain the suitability of an applicant.” The LCNC can, in turn, recommend to LEOC that a particular candidate be barred from running.

Jack Fonseca, of the Campaign Life Coalition, said it was a “lynching of social conservatives,” adding: “They’re trying to cancel us and it’s a total disgrace. This is what Red Tories do. Red Tories cheat. They’re dishonest and they don’t like to play fair. They’re corrupt.”

Under fire: Pro-Israel groups are calling for Patrick Brown to clarify after he broke ranks with the official CPC position on the Canadian embassy in Israel and drew drawing analogies between Ukrainians and Palestinians, the Post reports.

Brown made both comments in the transcript of an interview published over the weekend with Sada Al Mashrek, a publication that serves the Muslim community in Montreal. However, Brown’s team said on Monday that the published transcript was an inaccurate portrayal of his views. Shimon Koffler Fogel, president and CEO of the Centre for Israel and Jewish Affairs (CIJA), said he was concerned over Brown’s “disturbing comments” in the published article. “We have engaged directly with both Mr. Brown and his campaign team and are looking forward to public clarifications he may provide over the coming days,” he added.

No to WEF: Pierre Poilievre told a supporter that Maxime Bernier should explain his ties to the World Economic Forum — a think tank that is the target of anti-vax conspiracy theories — Press Progress reports.

After informing the supporter he has long opposed the WEF, Poilievre calls on Maxime Bernier to explain his own ties to the World Economic Forum: “Unlike Maxime Bernier, I’ve never been to the Davos conference that the World Economic Forum puts on. And he’ll have to explain why he went there and what he was doing there, but I did not go to that, and I would not go to it, nor will any of my ministers.”

Susan Delacourt, who was in Ottawa for the “Rolling Thunder” rally this weekend, notes in the Star that it did not have anything like the impact of the “Freedom Convoy,” and Poilievre kept his distance.

Pierre Poilievre, the candidate most closely aligned with the “freedom” convoyeurs, was out and about in the GTA over the weekend, far away from his own Ottawa-area riding and definitely not mugging for the cameras with the motorcyclists, as some might have expected. On Sunday, Poilievre did post a video on Twitter, in which he vowed to end vaccine mandates, but he didn’t include any nods to the protests winding down in Ottawa.

Love-fest: As Ontarians brace themselves for a provincial election, and federal Liberals and provincial Tories unite to spend money, Lorrie Goldstein, in the Toronto Sun, points out that Doug Ford’s path to victory necessitates winning the votes of a bunch of people who just voted for Justin Trudeau.

Boosting Kenney: In the Post, Sean Speer argues that Jason Kenney, whose fate is in the hands of UCP members, is leading “an energetic, reform-oriented, conservative government,” and deserves to hang on to his job.

In the Star, Chantal Hebert observes that Poilievre and Ford are likely right to believe voters are not in the mood for more aggressive climate action.

Regardless of who eventually takes the Conservative helm in September, the party will be committed to turning back the climate policy clock a decade to the time when the last Conservative federal government treated a carbon price for consumers as an abomination and acted as a facilitator for pipeline promoters. For the many provincial governments that hail from the conservative side of the spectrum, such an approach would likely be welcome. As Canada’s two largest provinces prepare to head to the polls, the front-runners in Quebec and Ontario are anything but climate warriors.