Anne Kingston: Focus on a mythical debate has a serious consequence: it ignores the larger sweep of social conservative policies promoted by anti-abortion groups 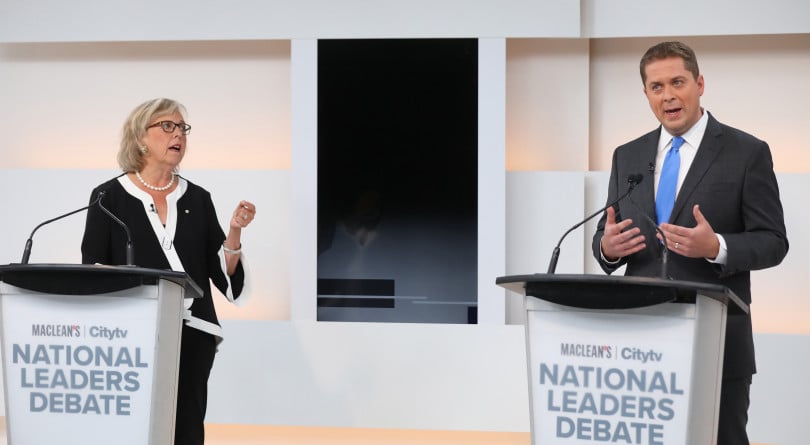 During the first leaders’ debate (minus Prime Minister Justin Trudeau) last week, NDP leader Jagmeet Singh went on the offensive against Green leader Elizabeth May with a salvo intended to sting. Singh noted four areas where his party and the Greens differ, including the NDP having “a solid position, unlike the Greens, on a woman’s right to choose.” May immediately shot back that Singh’s comments were “absurd” and called for a chance to rebut.

“None of what he just said was true,” she protested to Paul Wells, my Maclean’s colleague who served as moderator. Paul overruled May. The “abortion debate” was destined to be a topic aired frequently on the campaign trail, Paul noted, so he wanted to end it there.

If only we could all end it there. And, with it, retire the term “abortion debate” from the lexicon of Election 43. Who’s debating abortion? The courts? The Canadian Medical Association? No on both counts. And certainly not party leaders. They’re falling over one another to say they won’t reopen a “debate” that has been closed legally and politically since 1988, despite periodic attempts by backbencher MPs to pass private member’s bills that revisit legislation. It was in 1988 that the Supreme Court of Canada declared an abortion provision in the Criminal Code was unconstitutional; the ruling decriminalized abortion, which is now governed like any other reproductive health care procedure. As such, the provinces and territories determine literal access to abortion, a procedure that remains difficult for some Canadian women to access.

READ: The question to ask about Andrew Scheer and abortion

The fact abortion isn’t featured on any federal party platform, however, doesn’t mean that the “abortion debate” hasn’t been politically weaponized and codified. The prospect of Conservatives reopening the “debate” has provided a handy shorthand for Liberals, particularly as we watch Draconian restrictions placed on abortion in the United States. It’s dangled as a harbinger of retrograde policies that threaten to dial back the clock. And if we know anything from fungible party slogans, “forward” is where everyone wants to be headed.

May, whose party’s slogan is “Not Left. Not Right. Forward Together” stepped into it on CBC’s Power and Politics days before the election call when she announced elected members of her party would not be prevented from trying to reopen “the debate on abortion” in the next Parliament, despite her own stated belief that “a woman has a right to a safe, legal abortion.” The Green Party leader appeared to be taking a shot at Justin Trudeau’s edict that Liberal MPs must be pro-choice.

May presented it as a matter of democratic party governance: “I don’t have the power as leader of the Green Party to whip votes, nor do I have the power to silence an MP,” she said. In response to the ensuing furor, and potential loss of progressive votes, the Greens said they pre-screen candidates for their views on abortion, so re-opening the “debate” was not in the cards. Predictably, within hours, videos surfaced of two Green Party candidates condemning abortion, a gift to the NDP just waiting to be deployed. May subsequently has said the party is “re-vetting” candidates regarding their positions on abortion. The candidates filmed uttering anti-abortion sentiments remain in the race.

For his part, Conservative leader Andrew Scheer has repeatedly stated that as prime minister, he would oppose any measure to introduce legislation on abortion. “Nothing on this issue has changed for our party,” Scheer said in a CBC interview last week. “We have always made it very clear that we will not support re-opening the issue.”

That’s not entirely true. There have been winds of change at the party level. At the 2018 Conservative Party of Canada convention in Halifax, members introduced a motion to overturn a previous party resolution that “A Conservative government will not support any legislation to regulate abortion.” It was defeated by a narrow 53-to-47 margin.

READ: How Canada’s growing anti-abortion movement plans to swing the next federal election

Confounding matters further was Scheer choosing day two of the campaign—the first day on the hustings—to appear in Toronto alongside Rachel Willson, the Conservative candidate in York Centre who says: “I have never hidden behind the fact that I am pro-life.” Cabinet minister Carolyn Bennett was among Liberals who tweeted a 2017 video showing Willson at an anti-abortion rally in Ottawa stating that her top priority was “ending abortion” and “advancing pro-life legislation.” In response to the video, Liberal campaign strategist Gerry Butts tweeted a sarcastic mimicking of Scheer that reinforced the notion of an “abortion debate”: “I won’t re-open the abortion debate,” it read. “I just want to elect candidates who will re-open the abortion debate.”

Ironically, the groups with the most to gain from broadcasting the notion of an “abortion debate” are Canada’s anti-abortion political lobby which is known to work in coordination with groups in the U.S.  “Debate” suggests that abortion is a polarizing issue in Canada, even as major politicians being unwilling to go there publicly indicates otherwise.

That’s not to say Canadians hold a unified position on abortion. They don’t. Jack Fonseca, director of political operations for anti-abortion lobby Campaign Life Coalition, which was active in the provincial campaigns of Doug Ford and Jason Kenney, told CBC News that the federal Conservative Party is running more than 70 anti-abortion candidates. He expressed hope that at least a few of them would introduce private member’s bills on the issue.

Focus on an “abortion debate” has another consequence: it ignores the larger sweep of social conservative policies promoted by anti-abortion groups. These include a ban on the very measures proven to reduce the need for abortion: hormonal contraception and comprehensive sexual health education. Other rights and policies in their crosshairs:  LGBTQ2 rights, medically assisted dying, HPV cancer prevention vaccine programs, and embryonic stem cell research (Ontario defunded stem-cell research earlier this year).  As such, undue focus on a mythical “abortion debate” in the current election cycle isn’t only a waste of time, it’s a distraction from far greater and potentially very real political consequences.