Thirty or so questions for the Prime Minister 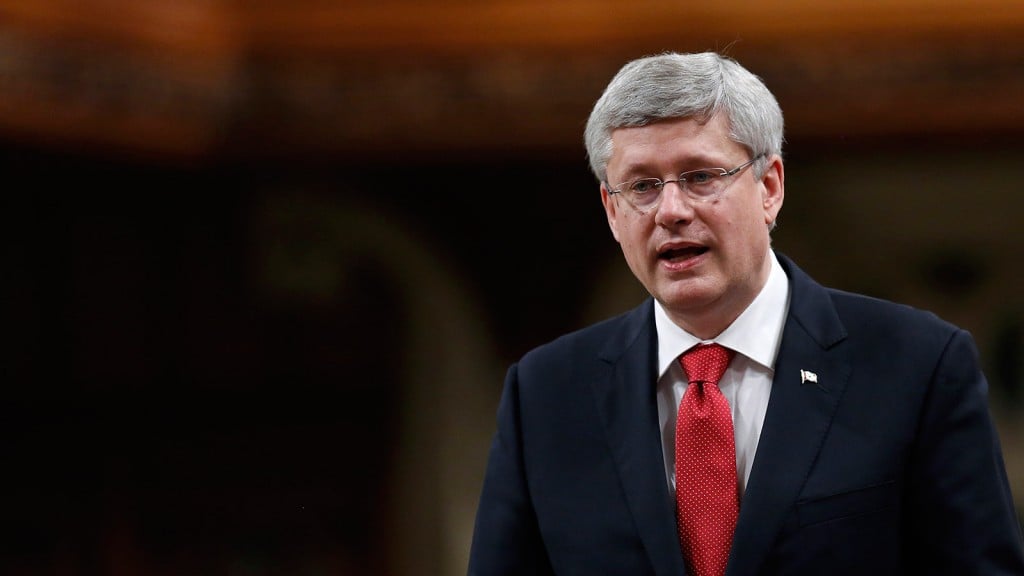 Yesterday, the federal government released its annual report on this country’s contribution to global climate change, demonstrating anew that we are nowhere near meeting the targets this government committed to for 2020. And so, perhaps predictably, the New Democrats sent up Megan Leslie this afternoon to castigate the government once more for its inaction.

But where one might have expected Colin Carrie, the parliamentary secretary for the environment minister, to stand and read again from a blue piece of paper bearing the official assurances and taunts, here, instead, stood the Prime Minister. The House would, rest assured, get to hear Carrie’s recitation, but first it would hear from Stephen Harper—the PM making a rare foray into the secondary rounds of question period.

Perhaps Harper had been up late the night before and heard the President of the United States invoking climate change to question the utility of the Keystone XL pipeline, that private sector project that has somehow come to be a national cause for our country. Perhaps Harper felt it necessary to respond.

“Mr. Speaker,” he said first, “obviously, on this side, we do not favour a carbon tax, as advocated by the NDP.”

All of which would at least be secondary by now, if the government could formulate any kind of an alternative proposal.

The Prime Minister boasted then that greenhouse-gas emissions had lately gone down even while the economy grew, though he neglected here to thank the provinces and the recession for much assistance in this regard.

The New Democrats were sufficiently intrigued to follow up, Leslie rising awhile later to remind the Prime Minister that he once promised a “national system of regulations for the control of greenhouse-gas emissions and air pollution” and to suggest that Harper and his government were, in failing to do so, “letting Canadians down.”

“I have been very clear in terms of regulating the oil and gas sector. It is something we would like to do,” he pleaded, “but that we must do on an integrated basis in a continental economy. Frankly, under the current circumstances of the oil and gas sector, it would be crazy economic policy to do unilateral penalties on that sector. We are clearly not going to do it.”

Then later, “In fact, Mr. Speaker, nobody in the world is regulating their oil and gas sector. I would be delighted if they did. Canada would be there with them. However, we will not impose unilateral penalties.”

He thrust his left hand in his pocket and jabbed and wagged his right index finger and he swore never to impose a carbon tax and the Conservatives leapt up to cheer their man.

So now, the fussing and gnashing about another sharp exchange on the topic of climate change.

But, if even just for kicks, let us take this seriously.

If the government believes it cannot enact regulations on the oil and gas sector unless the United States does something similar, why did Harper’s former environment minister twice predict that national regulations would be ready in years past? As of February 2013, the government was said to be “very close to finalizing” regulations for the oil and gas sector. Did the Harper government believe then that the Obama administration was prepared to act in some way? If so, what happened?

For that matter, how does the Harper government imagine a continental regulatory regime working for oil and gas? (Here is a look at where the United States might go next.) When does the Harper government imagine the American government might be ready to establish such a thing? How often have Canadian and American officials met to discuss such an arrangement? What is the state of those discussions? The Prime Minister says regulating the oil and gas sector “is something we would like to do,” so what, precisely, is the holdup?

What estimates and calculations support the Prime Minister’s contention that to proceed to regulate our oil and gas sector, regardless of the American situation, would be significantly harmful to Canadian industry? If the Prime Minister and his government are serious about this contention, let us see some math.

Is the Prime Minister at all concerned that the lack of regulations could be encumbering Canadian industry and hurting the cause of the oil sands?

Does the Prime Minister mean to suggest the Canadian oil and gas industry is so fragile that it would be profoundly wounded by new regulations?

When the Prime Minister says no one in the world is acting to regulate their oil and gas industry, is he dismissing Norway, for some particular reason?

What about Alberta? Does the Prime Minister believe the province’s unilateral carbon levy is a bad policy?

What about British Columbia’s carbon tax? Does the Prime Minister believe that is a bad policy? Is he concerned that B.C.’s premier is extolling the virtues of a carbon tax to other provinces?

For that matter, to what degree might the federal government hope that the provinces will figure it out for us?

Setting aside the Harper government’s previous positions on these sorts of things, if a cap-and-trade system, as the NDP has proposed, and a carbon tax, as the Liberals once proposed, are both unacceptable, how does the Prime Minister imagine the oil and gas industry’s emissions being regulated? By how much would the Prime Minister see the industry’s emissions reduced? At what cost? Does he imagine his regulations costing less and being more effective than a comparable cap-and-trade or carbon tax system?

Whatever happened to a more nuanced discussion of carbon pricing?

What about Peter Kent’s 30/30 experience?

Even if the Prime Minister is waiting for the President, what’s stopping the Prime Minister from publicly releasing his government’s proposal for regulations now? Why not table its plan tomorrow so that the public can better judge the NDP’s apparently ruinous proposal against an alternative?

In the meantime, does the Prime Minister see any conceivable way this country can meet its Copenhagen targets?

For that matter, to what degree does he worry about the prospects of climate change? How does he feel about the fact that he has been in office for eight years and has yet to implement a comprehensive approach to greenhouse-gas emissions? How would he explain that? Would he say it demonstrates a failure of federal policy or a lack of political will? Would he blame himself? The Americans? The Canadian public?

That last one is a doozy. But if the government has looked out across the expanse of opinion polling and decided it’s simply not worth the political effort, it would be nice to hear someone from the government say that.

If we had a serious Parliament, we might have a debate along these lines: We could imagine the environment committee having taken up a comprehensive study of this country’s federal regulations for greenhouse-gas emissions at some point in the last five years, or we could think that all of the above questions could be pursued by the committee, first thing next year.

But if the Prime Minister wants to be frank, he and his government might go ahead and answer the questions above. And the New Democrats and Liberals might offer their own answers. Or, at least, we might incessantly ask them.

That might finally show us a way past the paralysis of inaction that this Prime Minister once vowed to avoid: “Now we have to do something.”

That might uphold two principles: that climate change is “perhaps the biggest threat to confront the future of humanity today,” and that, “We owe it to future generations to do whatever we can to address this world problem.”

That might at least give the parliamentary secretary some new talking points to recite.