The Maclean's Politics Insider newsletter for May 17, 2018: Ottawa's $1 billion passport fee windfall, Trudeau blandly takes a swipe at Trump and things get awkward in NDP land

Here’s today’s edition of Maclean’s new political newsletter. Sign-up at the bottom of the page to get it delivered straight to your inbox.

That’s one way to pay off the national debt: The government has made a billion dollars in passport-issuing profits over the last four years. Maybe the feds can share their secrets with the U.K.—to cut costs amidst the big recolouring from EU-red to post-Brexit-blue, Theresa May’s lot had to go with a cheaper Franco-Dutch firm over a British one. [Globe story]

Seeming soft on irregular asylum seekers could cost the Liberals with existing immigrants who don’t like to see others queue jumping, pundits are prognosticating. Reminder: No one—and this is very important—is doing any jumping of any sort. Irregular border crossers are not processed before more conventional claimants and the refugee and immigration processing systems are separate. [Hill Times story, Global News story]

The front-running Coalition Avenir Quebec wants to amend the way immigrants enter the province to allow newcomers to be booted if they don’t meet its integration benchmarks. They would only be able to apply for permanent residence (the pre-citizenship step at which most people enter Canada) if they pass a series of trials. Someone might want to remind M. Legault that the immigration system is not like an online mattress company that ships to your door —there’s no free trial period on people. [L’Actualite story, Canadian Press story]

One province west: Doug Ford is visiting the Tri-Cities area, with stops at a Cambridge pizzeria and a Kitchener event venue that has a combination pizzeria-bowling ally. Whitby is where Kathleen Wynne’s at; she’ll be joined by her Durham candidates. 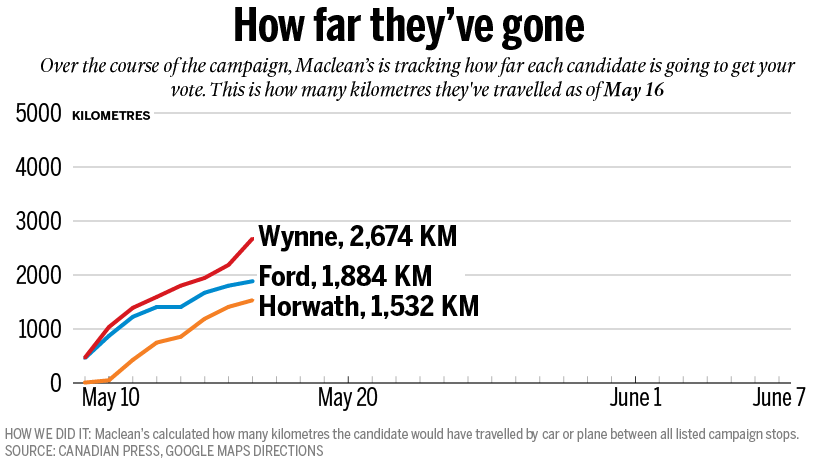 Justin Trudeau is across the border this week. Yesterday, he worked some ever-so-faint censure of their president in the one place he could be sure Donald Trump wouldn’t be listening—a commencement ceremony for an elite university in a blue state. Stephen Maher judged his speech “a bland call to mutual respect and openness.” [Maclean’s column]

The Prime Minister’s ostensible purpose for this travel is to stump for NAFTA, but Congress says everyone has until the end of the week to get a deal in front of their eyes, or else they’ll have to go away and come back after the midterms. [Canadian Press story]

Speaking of mutual respect, or not: The self-appointed antagonist-in-chief of Canada’s leftist parties, Jason Kenney, had some thoughts on the Prime Minister to share. Trudeau has “the political depth of a finger bowl” and “can’t read a briefing note longer than a cocktail napkin,” said the UCP leader, who has clearly been to a very nice and hygiene-happy restaurant recently. [Tweet]

Mark your calendar:  On May 24 Jason Kenney sits down with Paul Wells for the next #MacleansLive event

Elsewhere in Alberta, Kinder Morgan was politely noncommittal after Bill Morneau promised to backstop it—or any other party who will build this government a pipeline, please, someone—against losses from B.C.’s intransigence on Trans Mountain. [Maclean’s story, Calgary Herald story]

A year ago today, government records indicate at least nine deputy ministers met for breakfast at Langevin Block, as they do from time to time. Fisheries and Oceans Canada’s DM, however, wasn’t among them. She was busy meeting with a provincial counterpart on the other end of Queen Street. The chosen breakfast nook? Spin.

The total expense for two meals was $29, and would today have covered two eggs, hash browns and freshly brewed coffee for each diner. It’s unclear if that modest spread was more delicious than the irony of a top bureaucrat chowing down at a restaurant named after the primary specialty of her media relations team.

Thanks for reading the Maclean’s Politics Insider newsletter. Watch for it in your inbox every weekday morning at 6.30 am.