Eliza Reid on presidential perks, what binds northern nations, how she proposed, and Björk 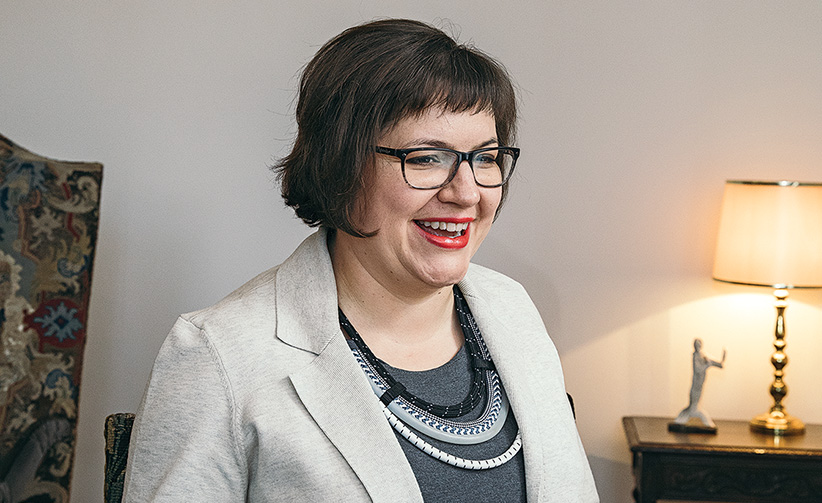 Canadian Eliza Reid, who grew up on a hobby farm in the Ottawa Valley, is now Iceland’s first lady. Last June, in the wake of the Panama Papers scandal, Reid’s husband, Guðni Thorlacius Jóhannesson—a history professor who had never held political office—was elected president. He has been married to Reid, a 40-year-old writer and editor, since 2004. Recently they moved into the president’s official residence with their four children, aged 9, 7, 5 and 3. Reid spoke to Maclean’s last week in Reykjavik.

Q: You met your husband in 1998, when you were both studying history at Oxford. I understand you made the first move.

A: I didn’t leave it up to fate. We went out on our first date because we were both on the rowing crew and there was a fundraiser for the team. The guys had these Styrofoam cups, and the girls would pay a pound for five tickets. You’d write your own name on the tickets and put them in different cups. Guys would draw one name out and take the girl out to dinner. I bought 10 tickets and put eight in his cup.

A: I thought that would be a bit stalker-like. Creepy.

Q: So was it love at first sight?

A: No. And I was only 22, too young to think of settling down or anything. But I found him very intriguing and funny and intelligent. When he finished his Ph.D. in 2003, we decided to move to Iceland. We got engaged just before we moved. We were away in Cornwall for the weekend, and I proposed to him. I’m not one for waiting around for things. We’d never really spoken about it before, but I thought, well, we’re moving to Iceland and making a life there, why not be married? And if I beat him to the punch, that’s fair enough. I brought a bottle of champagne with me and asked him over dinner one night.

Q: Before you became first lady, what were you doing here in Iceland?

A: For more than 10 years I’ve run my own company, a one-woman show, working in writing, editing, journalism, marketing and communications. The nice thing about a small society is you can wear a lot of hats.

Q: How did your husband end up running for the presidency?

A: The stars aligned. The former president had announced that he wouldn’t be seeking a sixth term at the beginning of the year. Then the Panama Papers scandal broke in April, which led to the resignation of Iceland’s prime minister. Guðni was working as a professor at the university and also a commentator on political affairs in the Icelandic media. So he was called to the state television station to comment on this ongoing development. He became better known, and this was when people were talking about who might be entering the candidacy for president. The scandal also showed people that the president isn’t just a figurehead. He needs to understand the constitution, and interact with parliamentarians and other politicians. My husband is an expert on the institution of the presidency and was speaking in an objective manner about what was going on. People saw that and they started to call our house. They looked up our phone number and called to say, “We saw you on television,” or, “My fellow fishermen on the boat would like to encourage you to run.”

Q: The president’s role is largely ceremonial. Is it like our Governor General?

A: That’s a reasonable comparison. He’s the head of state, not the head of government, although the president in Iceland would often have more of a role to play. Canada’s first-past-the-post system means that it’s generally clear after an election who will be invited by the Governor General to form the next government. In Iceland it’s a system of proportional representation, so multiple parties could have an even number of seats, or several parties would need to work together to form a coalition, and the president has to steer that negotiation.

Q: But how do you campaign for a figurehead position that requires no platform?

A: You can have a view of what the presidency should be about and how you might approach it. We travelled around the country in traditional campaign fashion, visiting workplaces, old-age homes. The president carries with him or her an invisible podium from which to speak. Although the president can’t say, “We need to put money into the health care system,” he could say, “I’ve been travelling around the country talking to Icelanders and there’s concern about the health care system. I can call the minister of health and say, ‘What’s the government doing?’ ”

Q: Right after the election, you flew to France to watch Iceland’s triumph as a new soccer power, beating England at its own game.

A: The election results became clear on June 26. That was Guðni’s birthday. He was 48, the youngest president to be elected. There’s a tradition in Iceland that when there’s a newly elected president, the public can go to their house to congratulate him the next day. Hundreds of people came and stood on our front lawn. We had a little balcony off our living room, and we went out with the kids and waved. Then we got up at three in the morning to fly to Nice to watch Iceland play England. We went with a couple of friends who had booked the tickets, but because he was president elect, there was security protocol: we were met at the airport with a miniature motorcade. Our son looked at the cars and said, “Do we have to pay for all of this?”

Q: How has all this changed your life?

A: We have tried to change it in as few ways as possible. We have moved into the official residence. The children have moved to a new school. We have different schedules, busy schedules, but try to carve out time with the children, and I really enjoy meeting lots of different people in lots of different places doing different things. I’m trying to take on as many projects as I can myself. I was just this morning delivering the opening remarks at a children’s literature festival. There’s a lot more to do, but there are more people helping with it. So it balances out.

Q: There’s a clear fairy-tale quality to this. You’re an outsider who’s now the first lady in a very small nation. Are you feeling the Princess Grace effect?

A: Not really. I’m actually the third foreign-born first lady, so Icelanders are used to a spouse being foreign-born and -raised. It’s such an egalitarian society. When you say Princess Grace, it’s like a different class of people. Icelanders like the fact that we are everyday people and want us to continue to be that way. That’s something that I have noticed in these two months. I can’t describe the feeling of how it is to have a whole school of kids waving flags and singing songs for you. Your heart flutters a little bit when you see it. We’re experiencing so many firsts at the moment. And obviously receiving various dignitaries.

Q: What about Justin Trudeau?

A: Well, we’ll see. He’s the head of government of course, not the head of state. It would be a pleasure to meet them, obviously. We’re of the same generation, and we have children of a similar age.

Q: How do Iceland and Canada compare?

A: We’re both countries of the north. I think they have similar population densities—300,000 in 100,000 sq. km and 30 million in 10 million sq. km. Also Canada is spread out along the border and Iceland around the coastline. So proportionately large expanses of emptiness. Canada and Iceland both have this respect for nature, in the sense of knowing who ultimately the boss is. I think of the fires of Fort McMurray and the volcanic eruptions in Iceland. They’re different natural causes, but we have to interact with nature in a way that some other countries don’t.

Q: Björk was at a film festival ceremony this week at your residence. She was wearing a spectacular designer outfit complete with a mask. She’s the most famous Icelandic star. How does she fit in?

A: Björk’s an interesting example. That reception is actually the first time I’ve met her. But we have a joke amongst new people who live in Iceland about when you have your Björk moment. I’d never met her before but I’ve seen her many times, in a swimming pool, at a restaurant at various receptions, walking down the street. Björk is the best-known Icelander abroad. But she’d be going to the local swimming pool just like anyone else. Everyone’s on a first-name basis in Iceland. You call your teacher, your doctor, by their first name.

Q: Do you still see yourself as a writer?

A: Hmm. Yes and no. There’s a phrase in Iceland, “to walk with a book in your belly,” meaning that everybody has a story they want to tell. I confess that I don’t have a book in my belly that I’m working on. I’m not secretly working on a novel. Having said that, I really enjoy writing. You never know what the future will bring.

Q: And when this all ends might you return to Canada? You could run for office and let your husband be the official spouse.

A: Or maybe I could just be president of Iceland and do a Clinton.

Correction: A previous version of this post referred to Iceland’s First Lady as Liza Reid. Her first name is Eliza. Maclean’s regrets the error.