Magnotta and Homolka: Anatomy of a rumour 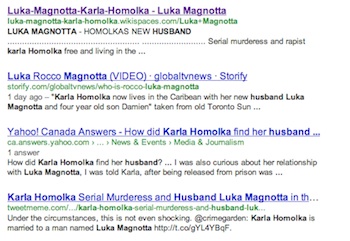 When fugitive murder suspect Luka Rocco Magnotta next appears in a Canadian courtroom, he will have much to answer for. But one thing of which he is not guilty, never has been, and almost certainly never will be is this: Having an affair—or even a casual relationship—with schoolgirl killer Karla Homolka.

Those headlines are slowly going away now but, after two days on the Internet, they have a life of their own and will undoubtedly spawn new stories and headlines in the future.

Here’s how a five-year-old fabricated story suddenly flared to life in the heat, pressure and exhaustion of a horrific murder investigation.

I first heard of Magnotta in September 2007 when I was Deputy Managing Editor at the Toronto Sun. He was briefly at the centre of a flurry of media attention in Toronto for denying he had been in a relationship with Homolka after her release from prison. He said an anonymous Internet campaign feeding the false rumour was ruining his life.

“I have lost modelling jobs and have been receiving death threats,” Magnotta told talk radio station AM 640.

Among those questioning Magnotta at the time was Toronto Sun columnist Joe Warmington, who recalled Thursday, “He might have been the creepiest person I ever interviewed.”

Warmington quickly determined during that 2007 interview that Magnotta had no connection to Homolka—but had some serious personal issues of his own to address.

“You spend 10 seconds with him and you easily come to the conclusion it’s all in his own head and all for attention,” Warmington said on Thursday.

Because I had directed the Toronto Sun team that found Karla Homolka in Montreal after her release from prison in 2005, I maintained a professional interest in her post-prison activities. I found the various Internet blog posts and discussions that Magnotta complained were linking him to Homolka. Like Warmington, I quickly concluded there was no basis for believing a connection between Magnotta and Homolka existed. And I also came to the conclusion that Luka Magnotta had probably posted the Internet rumours himself as a publicity-seeking stunt.

There was barely even a chance Magnotta and Homolka were in the same city at the same time, let alone cavorting.

After her release from prison in July 2005, Homolka lived in the Montreal area under the close supervision of her lawyer, Sylvie Bordelais. Homolka’s social milieu was so restricted during that period that she ended up marrying Bordelais’ brother. After she bore a child in early 2007, Homolka left Canada for the French Antilles with her husband and son.

One month before Homolka’s release from prison, Magnotta was convicted on a number of fraud charges in Toronto under his birth name—Eric Clinton Newman. He was sentenced to a nine-month conditional term with nightly curfew, which he served at his mother’s home in Peterborough. He was also put on probation for 12 months.

It was after completing that sentence that Eric Clinton Newman legally changed his name to Luka Rocco Magnotta. And moved to Ottawa. He would later return to Toronto but he did not move to Montreal until long after Karla Homolka had left that city.

That’s where the issue should probably have ended, but it didn’t. New rumours–and even newspaper stories from as far away as the Bahamas—kept reappearing over the years linking Magnotta and Homolka.

Then, on Thursday, journalist Colin Horgan reported on the Ottawa political website ipolitics.ca that repeated attempts have been made since October 2011 to edit Karla Homolka’s Wikipedia page to insert Luka Magnotta’s name as Homolka’s husband.

“According to Wikipedia’s history of revisions, in October 2011, Magnotta’s name replaced that of Thierry Bordelais, the man who in 2007 was reported to be Homolka’s husband …

The article was apparently left untouched for months, until February 2012, when again Magnotta’s name was inserted…

The article was edited again on March 4th (here), 5th (here), and 30th (here) of this year. Each time, Magnotta’s name was inserted, and each time by a different user.

There is no way to tell whether the changes were made by Magnotta or not.

Magnotta is also mentioned as Homolka’s husband in a piece written for Allvoices.com.

‘Karla Homolka serial murderess and husband Luka Magnotta in the Caribbean,’ reads the title of that piece. The piece was written by ‘inewsman’ in June, 2010. The contributor profile picture bears a remarkable resemblance to Magnotta.”

When Magnotta was identified as the prime suspect in the ghastly Montreal murder and dismemberment, those Homolka connections floating around on the Internet rose up again to join the ongoing outrage over videos posted online that purportedly showed Magnotta torturing and killing kittens.

So, of course, reporters asked the official spokesman for the Montreal police about the Homolka link, as well as about the kitten killings and all the other macabre aspects emerging in the Canadian crime story of the year.

Answering the dozens of questions was Ian Lafreniere, a veteran of le Service de police de la Ville de Montreal, recently promoted to the rank of commander from sergeant for his good work handling police media relations during the Quebec student demonstrations.

Like other police officers on the case, Lafreniere had been working around the clock.

“For most of the officers that have been there all night long, this is the kind of crime scene they’ve never seen in their life, in their career,” he told reporters who had also been working through the night. “So, yes, I can consider that a horrible crime.”

When reporters asked Lafreniere about the Internet stories linking Magnotta and Homolka, he treated the questions as what they were—minor distractions floating around the periphery of a huge, fast-breaking murder investigation with the accused murderer still on the loose and still a threat to the public, either in Canada or elsewhere.

So when the Homolka connection came up, Lafreniere said police had heard the rumours. “I’ve got no reasons to doubt about it,” CTV News quoted him saying. And the Montreal Gazette had Lafreniere agreeing with the possibility that Magnotta “could have been a good friend” of Homolka.

In the deadline pressure of pulling together a huge story from multiple sources and several reporters, those quotes—and the titillating link between two of Canada’s ghastliest murder stories—resulted in this lead paragraph going out to Postmedia news outlets across Canada on Wednesday:

“MONTREAL — Montreal Police have confirmed the suspect at large in a gruesome murder and dismemberment case once dated notorious sex killer Karla Homolka.”

Other news outlets, including Maclean’s itself, CBC News and CTV News, used the Lafreniere quotes as affirmation that there was some kind of relationship between Magnotta and Homolka. Still others were more circumspect in making the connection, referring to police confirmation of a “link,” not a relationship.

By Thursday morning, Montreal police were trying to clear up the confusion caused by Lafreniere’s ambiguous, off-the-cuff comments on Wednesday.

By Thursday afternoon, Postmedia websites were carrying the following paragraph in their Magnotta coverage:

“Montreal police backtracked Thursday on claims they made this week that Magnotta had dated Karla Homolka, one of Canada’s most notorious sex killers. Police officials clarified that they were aware of the many rumours posted on the Internet, but had no proof to substantiate those stories. In 2007, Magnotta came forward to news media to deny that he had dated her, although many at the time suggested he was the one who started the rumours to gain attention.”

So the Magnotta-Homolka story is back to what it was before — an unconfirmed, unfounded, untrue Internet fabrication. A false rumour probably started and certainly fueled by Luka Rocco Magnotta himself.

But, unfortunately, the headlines and stories saying “police have confirmed” the Magnotta-Homolka connection will remain in Internet space forever, overshadowing the retraction stories and just waiting to be pulled out and cited as sources of misinformation at some point in the future.