Maclean's Archives: In a world where girls are gazed at more than heard, this newsmaker is no less than a revolutionary

Maclean’s Archives: Anne Kingston’s story about Malala Yousafzai ran in the Maclean’s Newsmakers edition in 2013. On Oct. 10, 2014, Yousafzai and Kailash Satyarthi of India were jointly awarded the Nobel Peace Prize for their work for children’s rights.

Malala Yousafzai’s mettle is legend. In 2009, at age 11, she blogged about life in her native Pakistan under Taliban rule. She then publicly campaigned for the education of girls despite death threats. In 2012, she survived a would-be assassin’s bullet to the head. Last July, during a half-hour conversation with U.S. President Barack Obama at the White House, she confronted him about U.S. drone-strike casualties in her homeland. That was after Yousafzai, who aspires to be a politician, spoke at the UN on her 16th birthday.

Yet somehow what it took to really command attention was the teenage activist’s ability to reduce Jon Stewart to burbling mush during her appearance on the The Daily Show in October. A much-circulated YouTube video showed the usually unflappable host clasping his hand to his mouth in amazement when Yousafzai explained why she didn’t hate the Taliban or her gunman, who is still at large. Stewart was equally gobsmacked by Yousafzai’s eloquent plea for the importance of educating women and girls. “Can I adopt you?” he finally asked.

Yousafzai smiled serenely. But someone unfazed by the Taliban isn’t about to be bothered by a patronizing joke from a liberal talk-show host. Her agenda was larger: publicizing her memoir I Am Malala and promoting the Malala Fund dedicated to raising funds for the 60 million girls in the developing world who have little access to education.

Yousafzai has come to occupy a singular position in the West, a culture used to gazing at 16-year-old girls, not listening to them. Her voice was first heard in a BBC Urdu blog diary in January 2009; the Grade 7 student wrote under a pseudonym about the Taliban ban on educating girls. Within the year, she was advocating publicly, despite death threats. But she didn’t have name recognition in North America until she was the victim of horrific violence returning from school in October 2012. The world watched in wonder as she recovered in England, where the family now lives.

Her attack garnered protests and international condemnation. It spurred a UN petition, under the slogan “I am Malala,” demanding children worldwide be in school by the end of 2015; as a result, Pakistan passed its first Right to Education Bill.

Pakistan officially condemned Yousafzai’s attack but she remains a controversial figure. Her book has been banned in most schools. Extremists claim her shooting was staged by the CIA to justify drone attacks, even though she has spoken against them: “A war can never be ended by a war,” she told CBS this year. She has also been derided as a spy and a mouthpiece for Western agendas.

In the West, the modestly dressed feminist Muslim, who favours colourful head scarves, has become an unlikely celebrity, an inspirational antidote to Miley and Justin. In late 2013, a CBS reporter asked her if she was afraid when Mullah Fazlullah, the man who ordered her assassination, was named the new leader of the Taliban in Pakistan. No, Yousafzai said: “I might be afraid of ghosts and, like, dragons and those things, but I’m not afraid of the Taliban. If you kill someone, it shows that you are afraid of that person. So, why shall I be afraid of someone who is afraid of me already?” Her work matters more than her life, she said: “So, the thing is that, our body is going to die, but the mission, and the campaign that we have, I want that to survive, and I want that to live forever. And for that reason, I will continue my work.” 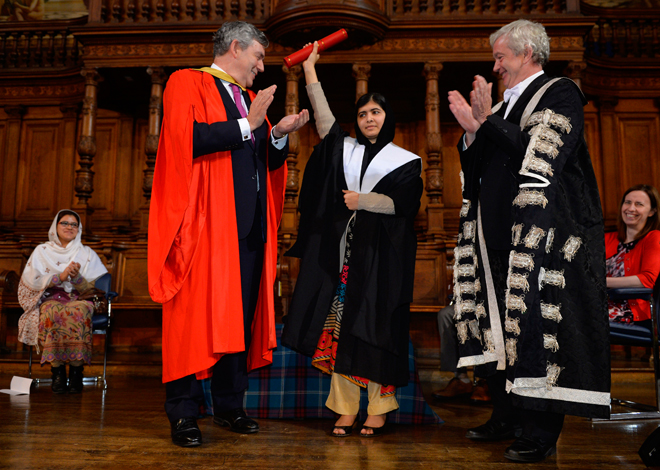 The awards and name-checking have been non-stop. Time named her one of its “100 most influential people in the world.” Madonna dedicated a song. The Canadian government wants to confer honorary citizenship. And much dismay was registered when she didn’t win the 2013 Nobel Peace Prize. A consolation of sorts was offered in November when she was named “one of 13 influential women in the world,” along with Hillary Clinton and Lady Gaga at the “Glamour Women of the Year Awards” in New York sponsored by Glamour magazine. “We love you, Malala!” girls cheered as she took the stage of Carnegie Hall. “The gun has no power because a gun can only kill,” she told the crowd. “But a pen can give life.”

Lady Gaga paid her homage: “If I could forfeit my Glamour cover I would give it to Malala,” she said, acknowledging that the glossy magazine would never make such an unorthodox move. “Never be afraid to speak your mind,” Gaga told Malala, as if she needed to be told. The model Iman called Yousafzai “a game-changer” and said she wished girls “knew more about Malala, and less about the Kardashians.” But focusing on Yousafzai alone is to ignore her message: she is but one of millions.