Mass vaccinations not yet needed to stop monkeypox 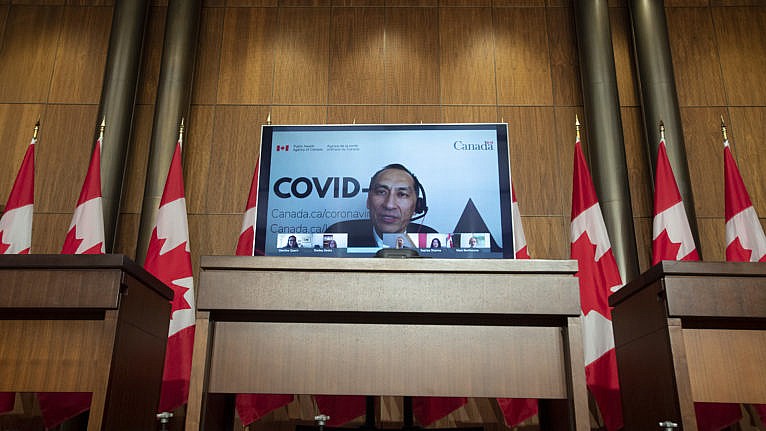 Canada’s deputy chief public health officer, Dr. Howard Njoo, said Thursday that mass vaccinations are not yet needed to stop monkeypox in this country, but people should keep their distance from others, Global reports.

Dr. Njoo said the virus “doesn’t discriminate” and can be spread through close contact with an infected person; people can avoid infection by “maintaining physical distance from people outside their homes. As well, wearing masks, covering coughs and sneezes, and practising frequent handwashing continues to be important, especially in public spaces.”

As of Thursday, 25 cases had been detected in Quebec and one in Ontario.

The party’s leadership election organizing committee says it is already breaking records for how many new members candidates have drawn in ahead of the June 3 cutoff date for new members being able to vote. As of last week, officials were bracing for a voting base of more than 400,000 members by the deadline. In comparison, the party had nearly 270,000 members signed up to vote in its 2020 leadership contest.

Paul Wells, who watched the debate, thought Jean Charest had a better night than Pierre Poilievre, but wonders whether Charest is “a candidate for the leadership of any party that might exist in the real world.”

Charest’s bet is that the Conservatives will be more interested in getting back to power than in throwing in their lot with a “pseudo-American,” as he called Poilièvre. Or that people who weren’t Conservative members at the beginning of the year will take out enough memberships to carry their pragmatist champion to the top job. “The Liberals [that is to say, Trudeau’s] didn’t lose the 2021 elections,” he said. “It’s the Conservatives who lost, because they got distracted by all sorts of stupid things.” He waved in Poilièvre’s direction as he said it.

More! Susan Delacourt was also watching. She writes in the Star that we should have more debates and less Twitter mudslinging.

Gatekeeper: In the Globe, Robyn Urback has a column making fun of Poilievre for attacking gatekeepers while showing every sign of being one himself.
Andrew Coyne has a strong column in the Globe, lamenting the spread of the paranoid style in Conservative politics, pointing out instances where Poilievre and Leslyn Lewis have misled Canadians.

This cynical act is sometimes dressed up as “sticking up for the little guy” or “taking on the elites.” It is not. It is exploitation, pure and simple, shaking down the gullible for money and votes. It’s a con as old as politics. Before Mr. Poilievre can promise his audience to “give you back control over your lives,” he has to first persuade them that control has been taken away from them – and that he alone has the power to give it back. Or rather, that they should give him that power.

No dice: The federal government has refused to disclose material to a federal court that explains its decision to use the Emergencies Act to stop the “Freedom Convoy,” the Star reports. Privy Council Clerk Janice Charette filed a statement in court in March 31 refusing to provide information sought by the Canadian Constitution Foundation, which is pushing for a judicial review of the Emergencies Act invocation. Such a review would be separate from scrutiny by a parliamentary committee and a public inquiry that will study the decision.

New controls: Justin Trudeau said Thursday that new gun control measures would be coming to Canada after a Texas school shooting that left 21 dead, CityNews reports. Trudeau did not say what the measures would entail.

No game: Canada Soccer cancelled a planned friendly against Iran under withering pressure on Thursday, CP reports. The June 5 game in Vancouver was supposed to be a showcase event Canada’s men, who qualified for the World Cup this year for the first time since 1986. But Trudeau, Vancouver Mayor Kennedy Stewart, Conservative MPs and B’nai Brith Canada cried foul because Iran killed 55 Canadian citizens and 30 permanent residents when it shot down Ukraine International Airlines Flight 752 in 2020.

Bad idea: In the Star, Bruce Arthur writes that Canada Soccer should have done more work before it signed the deal with Iran.

Instead, Canada Soccer charged ahead and pushback piled up, from Conservatives and Liberals alike. The prime minister said it wasn’t a good idea and that Canada Soccer would have to explain itself, which Canada Soccer has pretty steadfastly declined to do. It came out that the families of the victims planned to protest on game day, in the stadium. The players reportedly discussed among themselves whether they wanted to play the match. Sponsors may have gotten a little nervous.

Not engaged: In the Globe, John Ibbitson has a column about Canada being left out of a U.S.-led Indo-Pacific initiative, which he sees as inexcusable.

Down three: The Ontario Liberals dropped another candidate Thursday, making a total of three ridings with no Liberal in the June 2 provincial election, CP reports. Steven Del Duca said Thursday that Audrey Festeryga had withdrawn her candidacy. It was called into question by the NDP, who alleged that Festeryga was fraudulently registered with signatures gathered in support of another candidate.