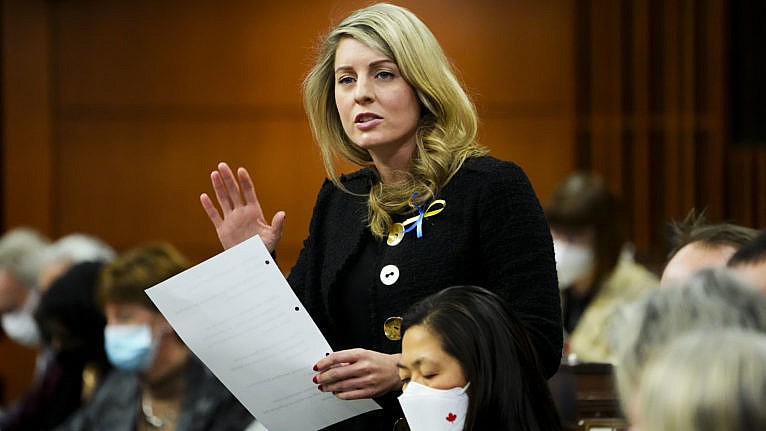 Joly stands during question period in the House of Commons on Parliament Hill in Ottawa, March 28, 2022. (Sean Kilpatrick/The Canadian Press)

In Helsinki on Monday, Foreign Affairs Minister Melanie Joly condemned Russian attacks on Ukrainian civilians as war crimes and said new Canadian sanctions are on the way, CP reports. Joly said Canada would be helping the International Criminal Court try to bring the perpetrators to justice.

Canada has sent half a dozen RCMP officers to The Hague to assist the ICC, and Joly and [Finnish foreign minister Pekka] Haavisto said it was important the collection of evidence begin soon. It was not known what role, if any, the Canadian contingent would be playing because they are now working under the authority of the ICC prosecutor’s office.

Growing outrage: On Monday, Joe Biden called for Vladimir Putin to personally face trial as international outrage grew, the BBC reports. The New York Times has a disturbing story from Bucha, where the Russians appear to have killed scores of civilians. In the House of Commons on Monday, MPs unanimously condemned the killings and stood for a moment of silence.

Charest on defence: CPC leadership candidate Jean Charest said in Halifax on Monday that he would spend much more on defence, including two new military bases in the Arctic, CBC reports.

Charest said Canada has been underfunding the armed forces for too long and Russia’s invasion of Ukraine has underscored that the country is unprepared: “Trudeau’s indifference and inaction in support of the Canadian Armed Forces has made it harder to retain qualified personnel, harder to recruit, tougher to train, and impossible for Canada to meet its obligations to its allies globally. Our allies have taken notice and are choosing to leave us out of important security arrangements.”

Kooky for crypto: The Globe has an interesting feature on CPC frontrunner Pierre Poilievre’s populist pitch for cryptocurrencies, in which he expresses the view — not shared by mainstream economists — that they could help individuals hedge against inflation. Former Stephen Harper adviser Sean Speer, though, argues the position should be understood as a gesture: “I think if you scratch the surface, it’s less a full-throated intellectual challenge to conventional monetary approaches than it is a kind of meme for a contrarian or countercultural impulse. I don’t know if you put a gun to Pierre Poilievre’s head that he thinks crypto is going to come to replace fiat currencies, as much as it is a symbol of disruption to mainstream institutions and conventional wisdom and conventional thinking.”

Lewis on ballot: Poilievre may be the perceived front runner, but social conservative Leslyn Lewis is the first candidate to get her name on the ballot, the Post reports.

Dias details: The Star reports that former Unifor president Jerry Dias was consuming heavy amounts of drugs and alcohol when he allegedly took $50,000 from a COVID-19 rapid test supplier, half of which he passed on to a friend who was passed over for an endorsement in the election to replace him.

Arbour report May 20: Anita Anand said at committee Monday that Louise Arbour report on sexual misconduct in the Canadian Forces is expected to land next month, Global reports: “In terms of my expectations, I have been meeting regularly with Mme. Arbour and I know that her process has been very thorough,” Anand said.

Josh Fullan has an earnest and interesting op-ed in the Globe on what he sees as a failure of civics education in Canada, pointing to recent news items to suggest many Canadians don’t seem to understand how our democracy is supposed to work.

And the really troubling and bottomless part of all of this is that we are gradually losing something imperative in the fog drifts of ignorance and disinformation – namely, how to effectively wield our individual and collective power within a democracy. We are losing our people power.

Canada is facing pressure to expand its refugee programs to welcome Ukrainians and Afghans forced to flee their homelands, but the decision by the church highlights the strain on a mostly volunteer system that is already stretched thin.

Still in jail: Convoy organizer Pat King said in court Monday that he’s still searching for lawyers to represent him at trial more than six weeks after his arrest, CTV reports.

“I’m in the process of shopping for lawyers right now,” King told court on Monday. “Due to the importance of this matter, I want to make sure we have proper representation.”

King, 44, is facing 10 charges in relation to his role during the ‘Freedom Convoy’ protests that occupied downtown Ottawa for three weeks, including intimidation, obstructing police and mischief. A co-accused, Tyson George Billings, also appeared in court Monday from the Quinte Detention Centre in Napanee, Ont.