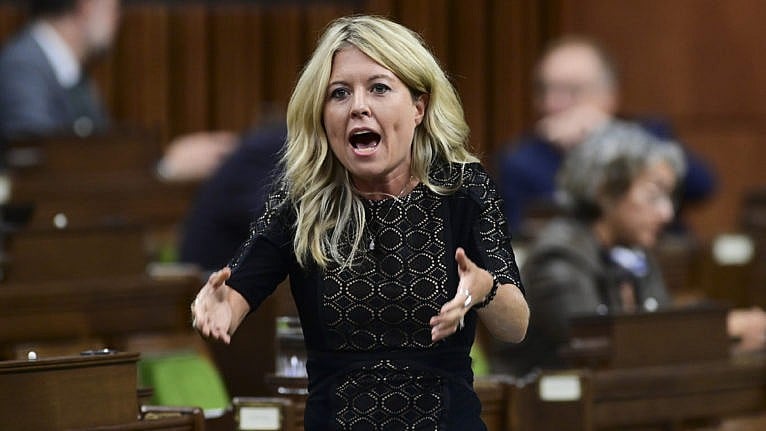 Conservative member of Parliament Michelle Rempel Garner asks a question during question period in the House of Commons.(Photo by Sean Kilpatrick/CP)

Michelle Rempel Garner, CPC MP for Calgary Nose Hill, announced on Twitter Wednesday night that she is considering running for Jason Kenney’s job. “Today, I can confirm that I am giving a provincial leadership bid serious consideration,” she wrote.

She also said she “will no longer be participating in the federal Conservative leadership race.” Rempel Garner was one of just a handful of CPC MPs in caucus to throw their support behind Patrick Brown rather than presumptive frontrunner Pierre Poilievre, and has been an important member of his team behind the scenes. Earlier this month, two Brown supporters in caucus switched their allegiance, a bad sign for the Brown campaign. Rempel Garner’s departure leaves just one Brown supporter in caucus—Doug Shipley, who represents Brown’s old riding.

Federal failure: British Columbia will start its own efforts to stop money laundering in light of failures by the federal government, the province’s attorney general said Wednesday after the release of a report that blames federal failures to stop illicit cash flow, the Star reports.

David Eby says the Cullen Commission’s highlighting of the ineffectiveness of Ottawa’s efforts mean the province has to strike out on its own. “It’s hard not to reach the conclusion the commissioner clearly did,” Eby said to reporters in Vancouver, following the report’s release. “The province needs to assume the responsibilities that previously the federal government would have done.”

Ex officer charged: Retired lieutenant general Trevor Cadieu, who is now in Ukraine, has been charged with two counts of sexual assault related to an alleged incident at the Royal Military College in 1994, the Citizen reports.

Police sorry: Toronto Police Chief James Ramer apologized to the city’s Black community on Wednesday as his force released a report showing Toronto police officers use more force against Black people, more often, with no clear explanation why, except race, the Star reports. One finding: In 2020, officers used force on Black people about four times more often than their share of the population, and Black Torontonians were five times more likely to have force used against them than white ones.

Two stories? In the Commons on Wednesday, Justin Trudeau doubled down on a claim that police forces “asked for” the powers Ottawa granted under the Emergencies Act during the “Freedom Convoy,” the Star reports: “During the blockades crisis, police forces, provincial and municipal authorities all asked us repeatedly for more tools in order to put an end to the blockades and these illegal demonstrations.”

Trudeau’s answers appeared to contradict testimony the night before by Bill Blair, who said police did not ask Ottawa for the act.

Unimpressed: Candice Bergen accused Trudeau of “completely” losing sight of Canadians’ needs in a speech to her caucus on Wednesday, CTV reports.

Drinks aloft: The in-flight bar did brisk business during Trudeau’s 2020 visit to Ethiopia, the Post reports. The 50-odd passengers  consumed 95 bottles of wine and 93 cans of beer, racking up an in-flight bar tab of $1,414.81.

Concerned: Rideau Hall says Gov. Gen. Mary Simon shares the public’s concerns about a $93,000-plus catering bill on a government plane during a work trip to the Middle East, CBC reports.

Unpopular app: A group of mayors and businesses in communities along the Canada-U.S. border is calling on the federal government to end the ArriveCAN app, CBC reports. The app was introduced during the pandemic to allow travelers to report their trips and vaccination status. Critics say it is discouraging travel.

Doomed? In the Post, Chris Selley reviews Trudeau’s chaotic-looking policy lurches on mandates and concludes that “it’s not hard to see this sequence of events — beginning with the election campaign and the much harsher and uncharitable tone it introduced toward people who disagreed with the government’s recommendations, and now these even-more-incoherent rules — as potentially the beginning of the end of his leadership.”

Bad call: Columnists Andrew Coyne, Robyn Urback, Brian Lilley and Sabrina Maddeaux all write about the Canadian diplomat who attended a party at the Russian embassy. None are impressed.

Challenges: In the Post, Kelly McParland contemplates the challenges faced by the Ontario Liberals and the federal Tories, both of whom are struggling to figure out how to win votes in “mushy” Ontario.

Orphan Tories: In Le Devoir, Marie Vastel covers similar ground, talking to Tories who are fretful about the outcome of the leadership race, given the gulf between the winning formula of centrist Ford and the more polarizing rhetoric of Poilievre (translation).

Travel: Trudeau is off to Rwanda, Germany and Spain for meetings next week, CP reports.