If legal titan Murray Sinclair was the first person in the room, his media-savvy son is trying to change the room altogether. Together, they are at No. 30 on our Power List. 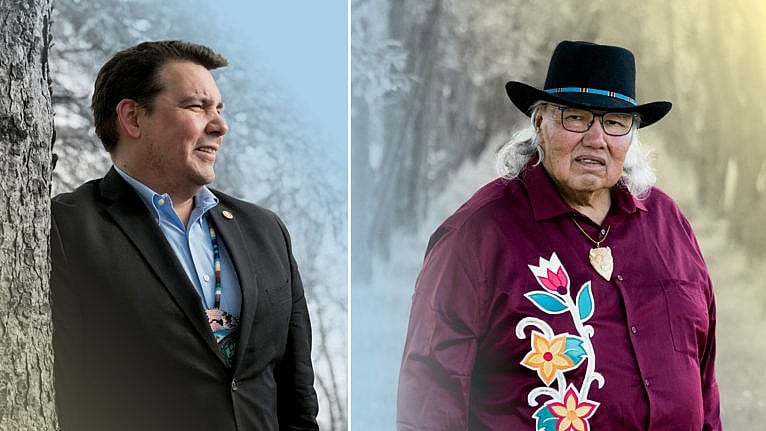 The way Niigaan Sinclair puts it, his father, Murray Sinclair, was the first one in the room. That is, he was among the first Indigenous person in Canadian institutional settings. In the courtroom, as a lawyer. Then on the judges’ bench. Then in the Senate. Then as chief commissioner for a long-overdue inquiry into the residential schools system.

When Niigaan was a little kid, he’d sit in courtrooms, admiring his dad’s bravery as he navigated an overwhelmingly white, biased legal system. That admiration was mixed with sadness. “I’ve been mad at Canada for a lot of things. Violence and genocide. But I’m also mad because my dad had to spend his life fighting it instead of coming to my soccer games,” he says, adding: “There’s a reason I didn’t become a lawyer.”

If Murray Sinclair was the first person in the room, his son is trying to change the room altogether. But he admits he fell into that mission by accident. Niigaan wanted to be an actor. It didn’t work out. He wanted to be a professional soccer player. But he shattered his leg.

Instead, Niigaan, now 45, was drawn into local community work, then academia, then media. He is the department head for Indigenous studies at the University of Manitoba, a regular columnist at the Winnipeg Free Press, an author—among other projects, he’s ghost-writing his father’s memoir—and a familiar face on TV. His growing public presence has him tugged in a thousand directions, but he still spends Sundays with the Mama Bear Clan, a women-led group that patrols Winnipeg streets to offer compassion and donated goods to people in need.

Niigaan has trained thousands of teachers about Indigenous education. Murray, in the twilight of his own career, mentors young lawyers. Though he keeps intending to retire, his pre-eminent expertise is highly sought-after. The septuagenarian former senator now oversees high-profile negotiations over federal compensation to Indigenous children.

He knows his career cost him time with his own kids. Asked if those sacrifices were worth it, he answers simply: “I don’t know.” But this is a man intensely proud of all that his children and grandchildren have accomplished—though he quibbles with Niigaan’s analogy. “There’s no doubt that merely being in the room or getting through the door, in and of itself, changes things,” he says, adding that Niigaan is building on that work. “He is changing the size of the room as much as anything.”