'My friends, help is here.' Doug Ford wins a majority in Ontario.

In a wild election crammed with plot twists, the PC leader delivered a dominant victory with promises of prosperity but not much of a plan 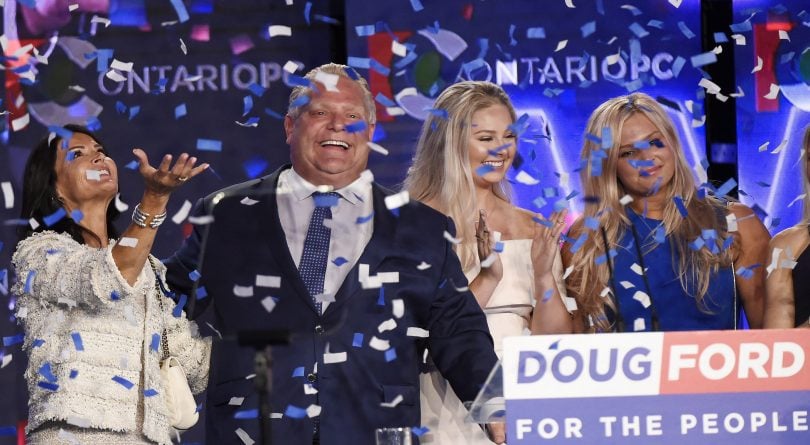 It seems only fitting that in the end, an absurdly dramatic Ontario election campaign that featured more plot-twists than an over-eager police procedural was decided with the ruthless swiftness of a program that needs to tie up its loose ends before the commercial break.

The polls had been closed a scant 12 minutes when the number in the little blue box on the live TV broadcast ticked past the magic figure of 63, signalling a Progressive Conservative majority.

By final count, the PC party led by Doug Ford had 75 seats, the NDP 39 and the Liberals just 7, one seat short of the number needed for official party status. The Green Party of Ontario, meanwhile, won its first seat ever.

The crowd at the Toronto Congress Centre, deep in Ford country, had their collective eyes glued to the wall-sized screens on either side of the stage, and they exploded with joy instantly when the majority mark was reached.

One woman flung her blue and white campaign sign into the air, hitting a cameraman, then danced as raucously as she could without spilling a drop from her full glass of red wine. She and her male companion turned to embrace each other, then made out like it was midnight in Times Square.

READ MORE: There are two Doug Fords. Which one will govern?

With Liberal Leader and outgoing Premier Kathleen Wynne having pre-emptively conceded the race in a dramatic announcement the weekend before, there seemed to be no need to wait for a concession speech before making a victory address. And so it was only one hour after the major broadcasters declared a resounding majority victory for the PCs that Doug Ford arrived at the venue to celebrate with his people.

“Thank you from the bottom of my heart. I will never forget the trust you’ve placed in me,” he said, as the crowd below him surged toward the stage in a roiling sea of blue and white. “This victory belongs to you.”

The people have spoken, Ford told his fans, and hope and prosperity will return to Ontario. He paused to flash a grin and thumbs-up around the cavernous, blue-lit room, and his supporters rewarded him with chants of “Doug! Doug! Doug!”

“My friends, help is here,” Ford intoned, flipping the “Help is on the way” refrain he’d used throughout the campaign—emblazoned on many of the signs bouncing around the room—into the completed present tense.

Then Ford invoked the memory of his late brother, Rob, the embattled former mayor of Toronto, telling his supporters that he was sure his younger brother was looking down on him tonight. “I’m getting chills talking about it,” he said. “I know Rob is celebrating with us tonight.”

Ford extended an olive branch to the voters who had not supported him, vowing to “work even harder to earn your confidence.”

But when he attempted to make the standard winner’s conciliatory remarks toward his vanquished opponent by offering some words of praise for Wynne, he was drowned out by furious boos.

All that was audible was “You fought a hard campaign and Ontario is better for it.”

Earlier in the evening, long before these partisan supporters had poured through the doors, the site of Ford’s election night victory party sported an aggressively “go big or go home” vibe.

The congress centre is comprised of two enormous hangar-like buildings a couple of kilometres from Toronto Pearson International Airport, directly under the punch-you-in-the-ear flight path. The north building, where the Ford soiree took place, opened into an entrance hall large enough that the campaign bus parked off to one side looked no more crowded than a compact car on a showroom floor.

From the side of the bus, Ford’s pharaoh-sized grinning face presided over a reception area offering chafing dishes stocked with a variety of convention-centre delicacies of questionable delight. The dishes were empty 15 minutes after the doors opened to the public.

There was a cash bar off to one side, and beers were not a buck apiece, per one of Ford’s campaign promises, but rather $10 for domestics and $11.50 for imports. By the time the doors opened to the public at 7 p.m., two hours before the polls would close, perhaps 100 Ford Nationals were waiting outside. They trundled in and plundered a nearby table offering free t-shirts emblazoned with “For the people,” with an enthusiasm only a few notches down from a Black Friday sale.

Inside the massive room set up for the victory party itself, the ceiling glowed neon PC blue behind the lighting tiles.

Before the results began to cascade in, the crowd had been oddly subdued and sparse, given that all indications suggested things would go their way. That changed rapidly once the polls closed, and at 9:12, they exploded like human confetti when their party reached majority government territory.

“VICTORY!” a 20-something man with bleached blonde hair screamed at people standing near him, plainly vamping it up and enjoying himself. A few rows away, a man of about 50 with mutton-chop sideburns hollered “DOUGIE!” and turned to high-five the woman next to him. He, too, played it up self-consciously for a small herd of photographers who advanced on him. All across the room, white and blue signs emblazoned with “HELP IS ON THE WAY” and “DOUG FOR THE PEOPLE” bounced manically in the air.

The crowd inched closer and closer to the stage, cheering each time the TVs displayed another seat declared for the PCs or a defeat for a Liberal or NDP candidate, waiting for their man to appear in person.

When Ford finally climbed to the stage, his speech hit all the same notes he’d been hitting throughout the campaign—restoring Ontario to greatness, no more partying on the public dime, listening to the sort of real, ordinary people best encompassed by the word “folks”—but the tone was more serene, less angry and offended.

He wound up his brief speech—it was no more than 10 minutes from end to end—with a familiar and reliable applause line, promising, “We will make Ontario once again the engine of Canada.”

How exactly he will make that happen is still something of a question mark. Ford was criticized throughout the campaign for not offering a fully costed platform explaining how his party would deliver more jobs, lower taxes and no cuts, all while getting runaway spending under control.

“This is your victory,” he told his Ford Nationals. “Tonight is your night, and I thank each and every one of you. God bless you.”

Then Ford was joined onstage by his mother, Diane—the Etobicoke-famous matriarch of the Ford clan—his wife Karla and their four grown daughters.

He hugged each in turn and they posed for a brief moment grinning at the crowd. Then two confetti cannons on either side of the stage exploded, showering blue and white squares over the Fords and their supporters, and they descended the stairs from the stage and disappeared from view.

An hour later, the room was completely emptied of supporters, the chairs were stacked in neat spikes of metal and commercial upholstery, and all that remained of the victory celebration were drifts of confetti and empty pop cans on the floor.

Even the huge Ontario flag that had dominated one corner, big enough to conceal a modest bungalow behind, was gone.