Rachel Notley and the NDP remain far behind in Calgary, where they need votes for any shot at retaining power, according to a Pollara survey 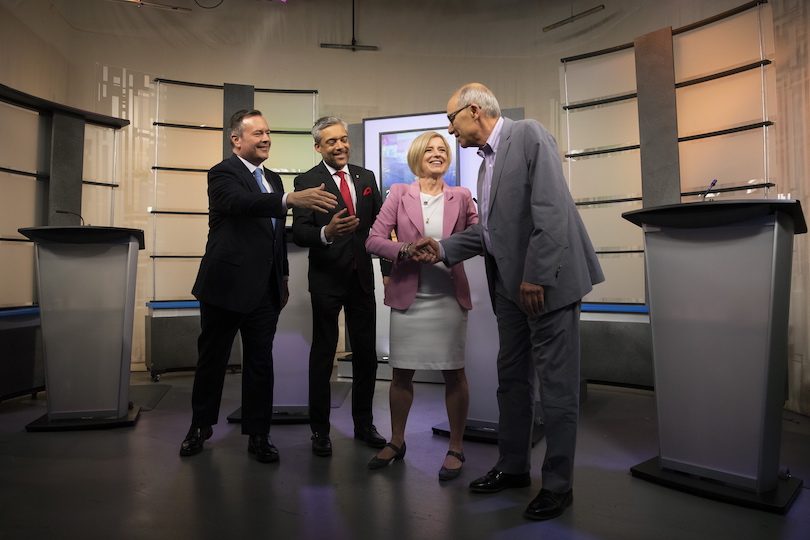 Jason Kenney’s United Conservative Party heads into the Alberta campaign’s final days with a single-digit lead that keeps it on track to form a majority government, according to a poll conducted for Maclean’s.

The governing NDP has a commanding lead in Edmonton but trails substantially in Calgary and throughout the rest of the province, suggests a Pollara Strategic Insight survey of 1,005 Albertans conducted from April 8 to 10, in the contest’s final full week.

Province-wide, the United Conservatives have support of 45 per cent of decided or leaning voters, compared to 38 per cent for the NDP, the poll suggests.

Most surveys indicate that Kenney’s party has lost support after revelations about homophobic and otherwise intolerant comments by UCP candidates, and the shady conduct during his 2017 party leadership contest—the double-digit poll leads he’s enjoyed for months have eroded. Still, his current lead remains solid enough to make him Alberta’s next premier, particularly because of how the numbers break regionally. The findings “actually can make a seven-point lead by the UCP look tighter than it is, when so many of the NDP votes are concentrated in the Edmonton area,” says Craig Worden, president of Pollara Strategic Insights. 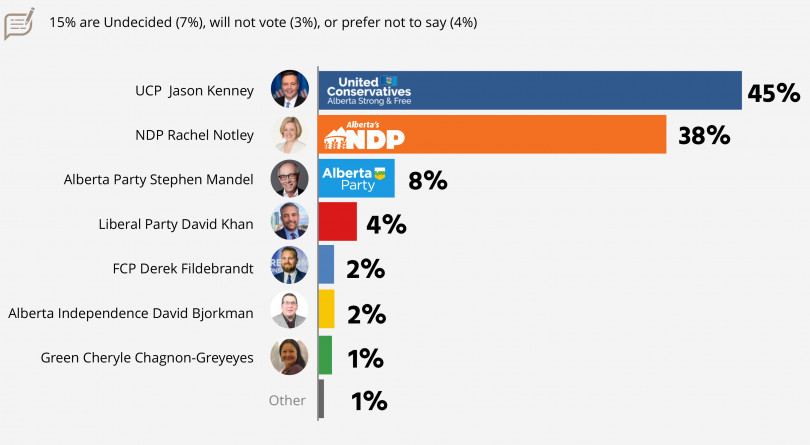 Rachel Notley’s party is the top choice among 56 per cent of voters in Edmonton—which she swept in her 2015 victory—double the UCP’s 28 per cent. But despite Notley spending most of the campaign—and the entire final week—stumping in Alberta’s biggest city, Calgary has not embraced the NDP. The United Conservatives have a 53 per cent to 33 per cent lead in the business epicentre of oil and gas, where unemployment is among the country’s highest and downtown office buildings have steadily hollowed out in recent years amid low oil prices and pipeline approval delays. Kenney has blamed Alberta’s economic woes on the Notley government, and he promises corporate tax cuts and looser environmental regulations to help bring recovery.

The Alberta Party, whose Stephen Mandel is the only major leader whose impression among Albertans has improved during the campaign, still lags far behind province-wide at eight per cent, which suggests they will struggle to win any seats. The Liberals sit at four per cent, the Freedom Conservative Party and Alberta Independence Party at two per cent each, while the Greens have one per cent support. But since none of these underdog parties are running candidates in every riding, some of their votes will be up for grabs among larger parties.

The Pollara-Maclean’s poll was an online survey among a randomly selected, reliable sample. While traditional margins of error cannot be applied to online panel surveys, a probability sample of 1,005 Albertans would have a margin of error of +/-3.1 percentage points, 19 times out of 20.

While the 2015 Alberta election delivered the NDP victory that nearly all pollsters had predicted, in 2012 polls right down to the wire showed a comfortable lead for the Wildrose Party, before the Progressive Conservatives won by nearly 10 percentage points, thanks largely to last-minute switches. “I’d never say things are locked in,” Worden says, noting that the race has tightened in recent weeks. But a substantial change would be necessary to change the likely outcome, he adds.

For a massive chunk of the electorate, any developments in the final days might not matter. More than 400,000 Albertans have already cast ballots in the first three of five days of advance voting—equivalent to 15 per cent of eligible voters. In the last election, the 57 per cent overall turnout was the highest in more than two decades. 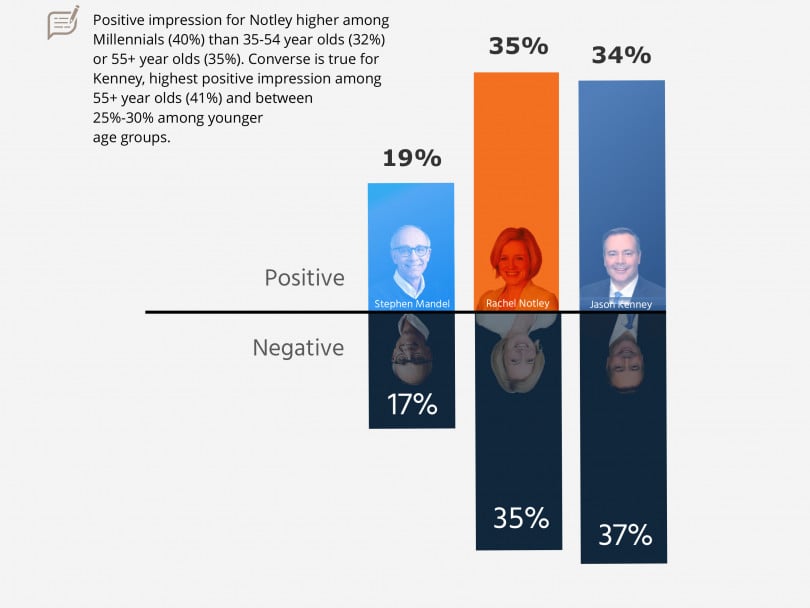 The negativity wielded by the main leaders against their rivals seems to have soured the electorate on both Kenney and Notley, but moreso on the Conservative, whose party has lost ground since the campaign began. The Pollara-Maclean’s survey indicates 42 per cent of Albertans have a worse impression of Kenney than before. But steady attacks on Notley’s economic performance and approach to the Trudeau government appear to have taken its toll on her: 34 per cent say their impression of her has worsened.

Despite the UCP lead, Albertans remain split on who would make the best premier. Thirty-six per cent of respondents pick Notley, and the same proportion pick Kenney, the former federal Conservative immigration minister.